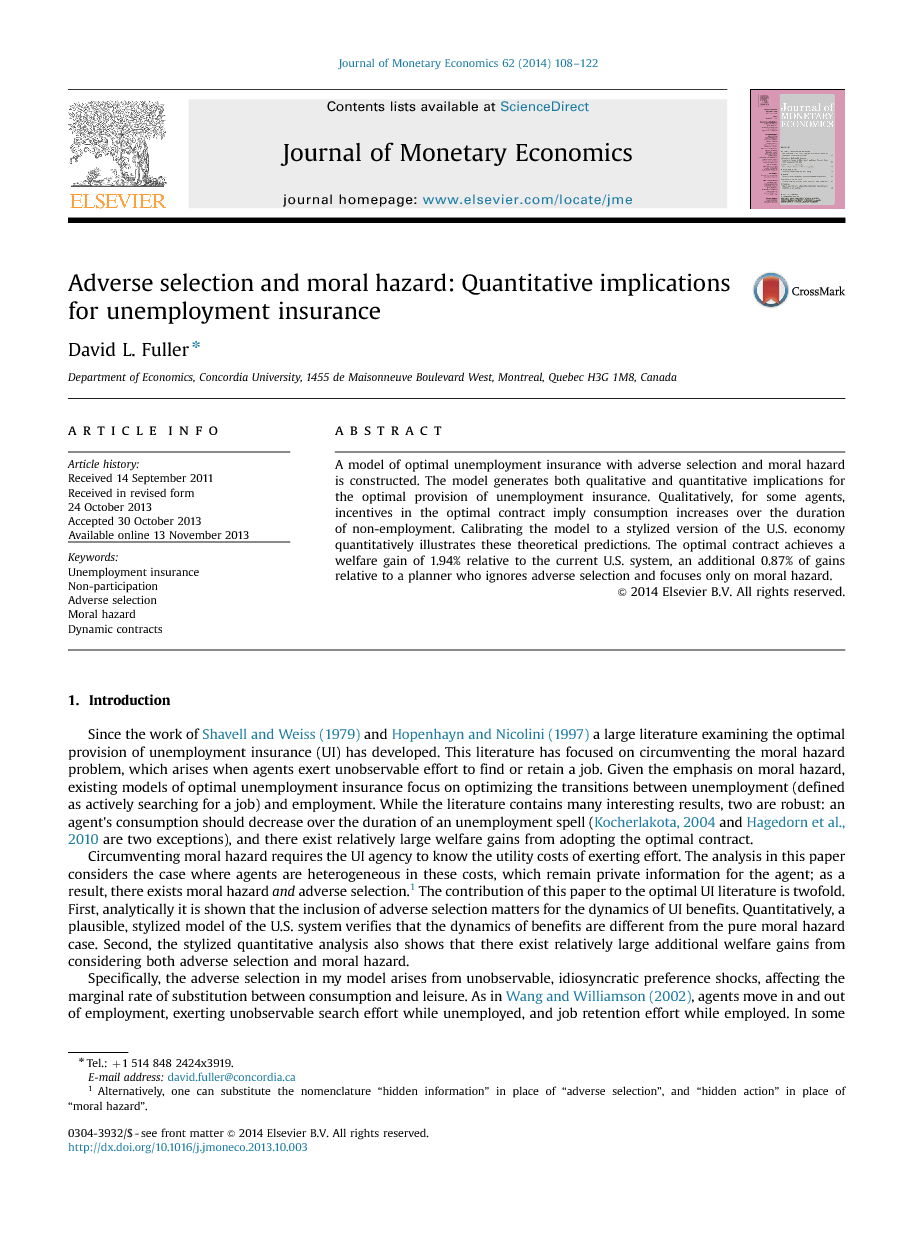 A model of optimal unemployment insurance with adverse selection and moral hazard is constructed. The model generates both qualitative and quantitative implications for the optimal provision of unemployment insurance. Qualitatively, for some agents, incentives in the optimal contract imply consumption increases over the duration of non-employment. Calibrating the model to a stylized version of the U.S. economy quantitatively illustrates these theoretical predictions. The optimal contract achieves a welfare gain of 1.94% relative to the current U.S. system, an additional 0.87% of gains relative to a planner who ignores adverse selection and focuses only on moral hazard.

The results in this paper suggest strong implications for current UI policy. First, “unemployment” insurance should be extended to those who are currently non-participants (but still want a job and are available) under the U.S. system. Moreover, according to the optimal contract, these non-participants should be searching (i.e. do not transition to non-participation). Second, in terms of implementation, consider the following. Each time a worker files a claim for benefits, they should report their desire to remain in the labor force or not (i.e. search or not search). Depending on this report, the UI authority offers a benefit scheme. In equilibrium, the optimal allocation implies that repeated reports of a desire to exit the labor force imply an increasing consumption profile. The agent should report this desire each period, and the allocation depends on the entire history of reports and the entire history of employment. As others have noted (e.g. Wang and Williamson, 2002) this history dependence could be implemented via a scheme of UI accounts; the balance in the account increases and decreases according to actual histories. This device serves to act as the promised lifetime utility variable in the optimal contract. The quantitative results show that there exist large welfare gains from considering the report of an agent's desire to continue searching. There are several aspects of my analysis that offer interesting directions for future research. First, the quantitative analysis primarily illustrates how the inclusion of dynamic adverse selection changes the qualitative predictions of the dynamics of benefits in a model of optimal UI. While it uses a subset of the unemployment to non-participation group to quantify the effects of moral hazard, this clearly does not take into account the full heterogeneity of the population. Future research should indeed focus on incorporating more persistent shocks that would allow such additional heterogeneity to be analyzed. Second, the policy prescriptions for non-participants rests on being able to identify the 7.2% of non-participants who want a job and are able and available for one. That is, while the taste shock remains unobservable, the analysis assumes that the UI agency can offer a policy that specifically targets this subset of non-participants. In many cases this assumption is relatively innocuous. Those who do not want a job now, or are unable and unavailable for one, are often easily identifiable. Examples include those disabled, those engaged in child care, or full-time students. In such cases, the UI agency can easily identify these types as not in the able and available group. It should be noted, however, that the policy prescriptions presented in this paper do come with this caveat. Indeed there may exist some portion of non-participants that are not easily identifiable as in or out of the able and available group. This also underscores the need for future research to incorporate more persistent shocks, which would allow the policy prescriptions to be less dependent on identifying this subset of non-participants.