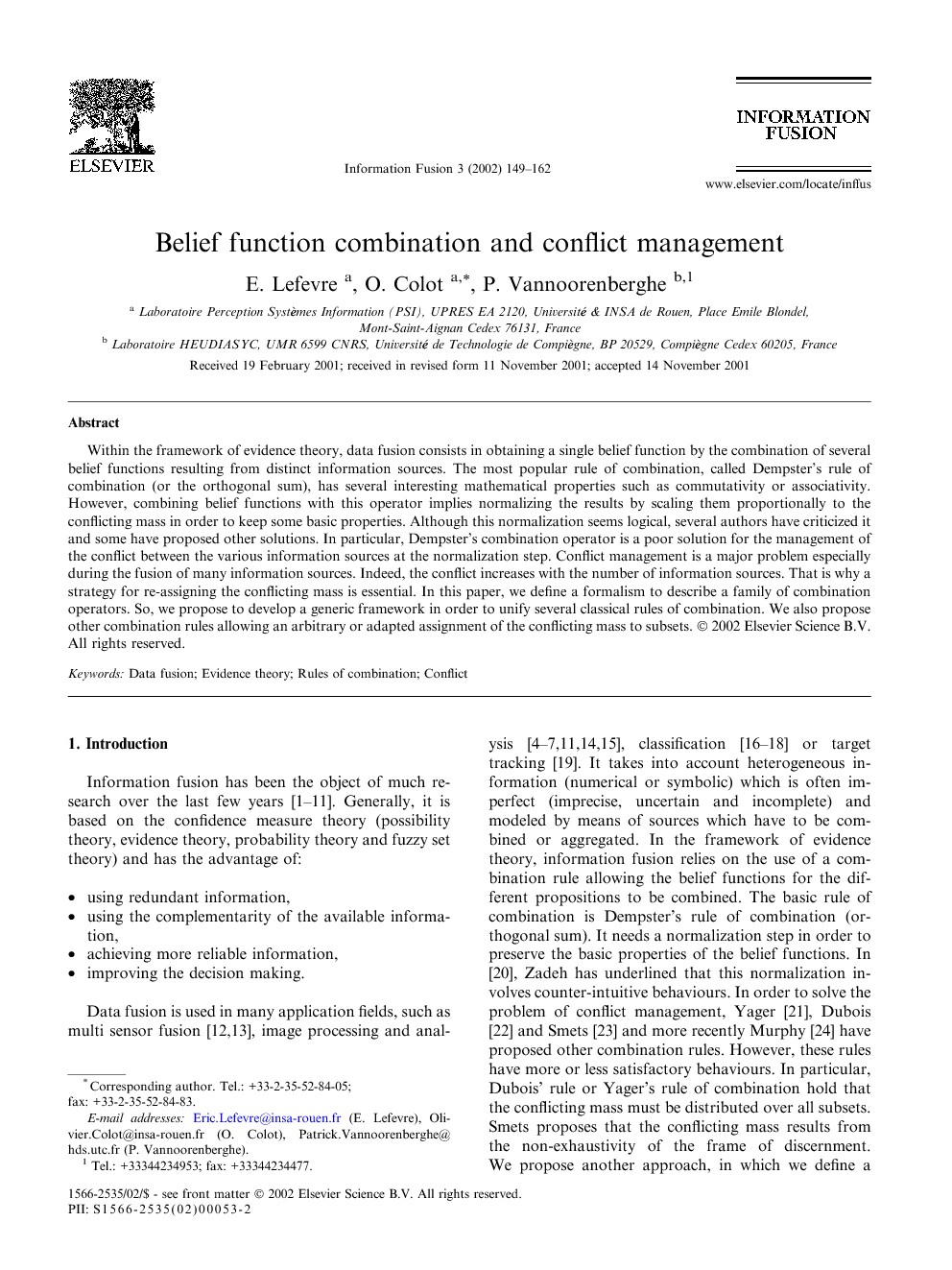 Within the framework of evidence theory, data fusion consists in obtaining a single belief function by the combination of several belief functions resulting from distinct information sources. The most popular rule of combination, called Dempster's rule of combination (or the orthogonal sum), has several interesting mathematical properties such as commutativity or associativity. However, combining belief functions with this operator implies normalizing the results by scaling them proportionally to the conflicting mass in order to keep some basic properties. Although this normalization seems logical, several authors have criticized it and some have proposed other solutions. In particular, Dempster's combination operator is a poor solution for the management of the conflict between the various information sources at the normalization step. Conflict management is a major problem especially during the fusion of many information sources. Indeed, the conflict increases with the number of information sources. That is why a strategy for re-assigning the conflicting mass is essential. In this paper, we define a formalism to describe a family of combination operators. So, we propose to develop a generic framework in order to unify several classical rules of combination. We also propose other combination rules allowing an arbitrary or adapted assignment of the conflicting mass to subsets.

Information fusion has been the object of much research over the last few years [1], [2], [3], [4], [5], [6], [7], [8], [9], [10] and [11]. Generally, it is based on the confidence measure theory (possibility theory, evidence theory, probability theory and fuzzy set theory) and has the advantage of: • using redundant information, • using the complementarity of the available information, • achieving more reliable information, • improving the decision making. Data fusion is used in many application fields, such as multi sensor fusion [12] and [13], image processing and analysis [4], [5], [6], [7], [11], [14] and [15], classification [16], [17] and [18] or target tracking [19]. It takes into account heterogeneous information (numerical or symbolic) which is often imperfect (imprecise, uncertain and incomplete) and modeled by means of sources which have to be combined or aggregated. In the framework of evidence theory, information fusion relies on the use of a combination rule allowing the belief functions for the different propositions to be combined. The basic rule of combination is Dempster's rule of combination (orthogonal sum). It needs a normalization step in order to preserve the basic properties of the belief functions. In [20], Zadeh has underlined that this normalization involves counter-intuitive behaviours. In order to solve the problem of conflict management, Yager [21], Dubois [22] and Smets [23] and more recently Murphy [24] have proposed other combination rules. However, these rules have more or less satisfactory behaviours. In particular, Dubois' rule or Yager's rule of combination hold that the conflicting mass must be distributed over all subsets. Smets proposes that the conflicting mass results from the non-exhaustivity of the frame of discernment. We propose another approach, in which we define a generalized framework for the fusion of information sources by means of a generic axiomatic. This framework enables a large family of combination rules to be obtained. This paper is organized as follows. The basic concepts of evidence theory are first briefly introduced (Section 2) including the problem of conflict in Dempster's rule of combination. In Section 3, we define the generic framework allowing classical combination operators to be unified and we propose a family of new combination rules. Finally, some methods to determine weighting factors for the conflicting mass distribution process for each proposition implied in the conflict are proposed (Section 3.3.2). Tests are given in Section 4.

In this paper, we have presented a generic framework for the fusion of information sources modeled by means of belief mass functions. From this framework, we retrieve the classical combination operators used in evidence theory. Furthermore, this generic framework allows a family of combination operators to be defined, so it is possible to derive different operators based on: • the definition of a set collecting the subsets A where the conflicting mass will be distributed, • weighting factors denoted assigned to each subset . The relationship between the discounting and the weighted combination has been emphasized (see Appendix A). Several methods are possible in order to obtain the weighting factors. One of these methods determines the weighting factor by minimizing a mean square error and this is possible for pattern recognition problems. The method has been checked and compared with Dempster's classical combination rule. The tests also show that our approach, as well as being particularly well-suited to pattern recognition, is also valid for the interpretation of the resulting mass. With this formalism the most suitable solution will always be applied in each different conflict management strategy. The application of the proposed formalism to the case of partially known labeling is under study.