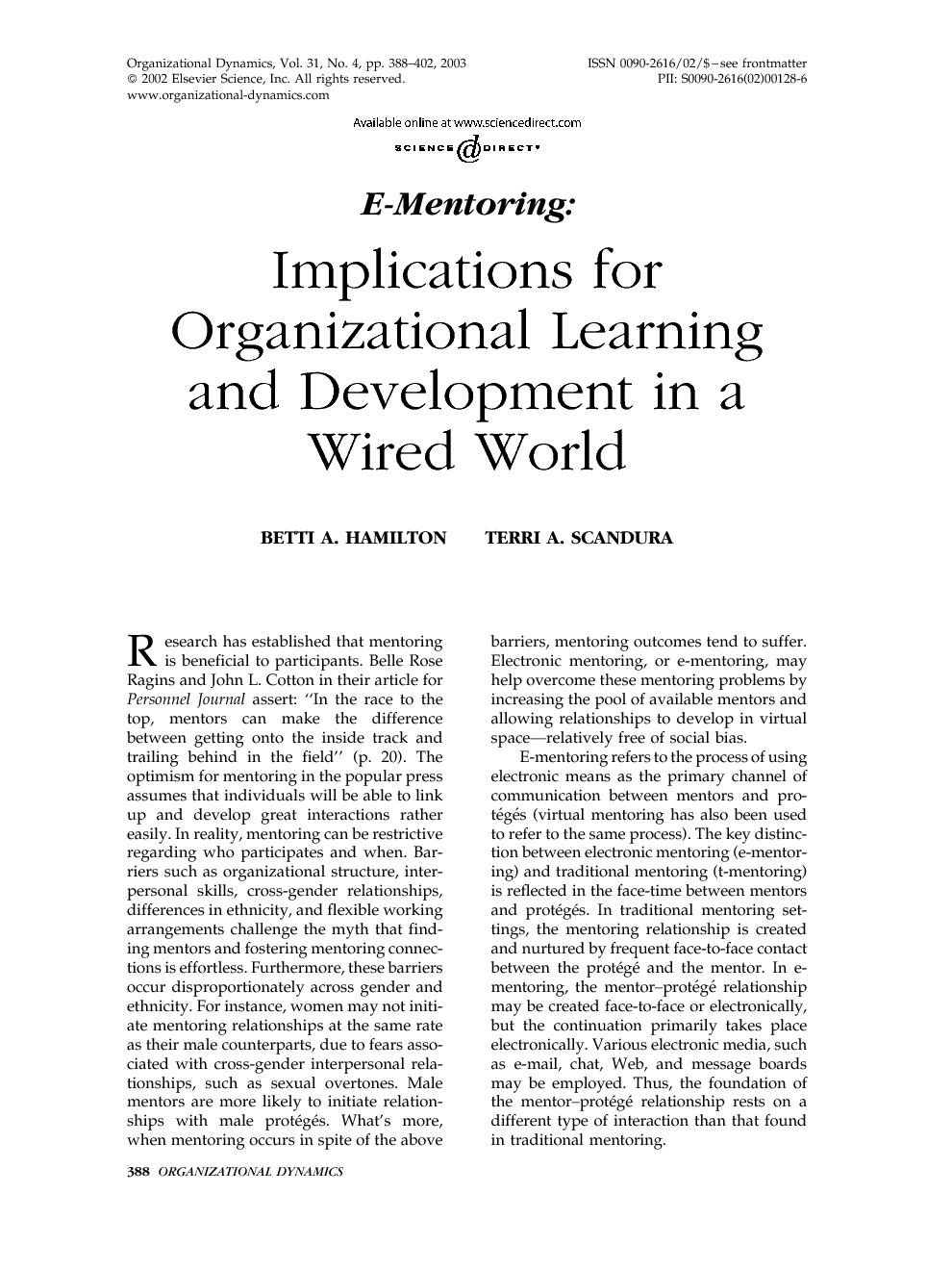 Research has established that mentoring is beneficial to participants. Belle Rose Ragins and John L. Cotton in their article for Personnel Journal assert: “In the race to the top, mentors can make the difference between getting onto the inside track and trailing behind in the field” (p. 20). The optimism for mentoring in the popular press assumes that individuals will be able to link up and develop great interactions rather easily. In reality, mentoring can be restrictive regarding who participates and when. Barriers such as organizational structure, interpersonal skills, cross-gender relationships, differences in ethnicity, and flexible working arrangements challenge the myth that finding mentors and fostering mentoring connections is effortless. Furthermore, these barriers occur disproportionately across gender and ethnicity. For instance, women may not initiate mentoring relationships at the same rate as their male counterparts, due to fears associated with cross-gender interpersonal relationships, such as sexual overtones. Male mentors are more likely to initiate relationships with male protégés. What’s more, when mentoring occurs in spite of the above barriers, mentoring outcomes tend to suffer. Electronic mentoring, or e-mentoring, may help overcome these mentoring problems by increasing the pool of available mentors and allowing relationships to develop in virtual space—relatively free of social bias. E-mentoring refers to the process of using electronic means as the primary channel of communication between mentors and protégés (virtual mentoring has also been used to refer to the same process). The key distinction between electronic mentoring (e-mentoring) and traditional mentoring (t-mentoring) is reflected in the face-time between mentors and protégés. In traditional mentoring settings, the mentoring relationship is created and nurtured by frequent face-to-face contact between the protégé and the mentor. In e-mentoring, the mentor–protégé relationship may be created face-to-face or electronically, but the continuation primarily takes place electronically. Various electronic media, such as e-mail, chat, Web, and message boards may be employed. Thus, the foundation of the mentor–protégé relationship rests on a different type of interaction than that found in traditional mentoring. Compared to t-mentoring, e-mentoring opens the door for greater flexibility in creating and sustaining relationships. For instance, since mentors are not limited to specific regional locations, more individuals can participate as mentors. Additionally, the reduced level of social cues over electronic media may allow greater opportunities for women and minorities to interact with mentors relatively bias-free. Face-to-face interactions may be distracted by visual cues, and issues related to setting, context, and atmosphere may hamper communication. E-mail and text-based messaging are leaner communication channels that allow for more direct information transfer—thereby minimizing contextual issues. Finally, individuals with alternative work schedules, such as telecommuters or those who work flex time, may still access mentors without altering their work arrangements. This continued access to the mentor might help sustain the relationship in instances where time constraints and work conflicts might not have allowed the mentorship to survive otherwise. The convenience offered by e-mentoring opens the opportunity to all in accessing a larger, more diverse range of mentors than might be readily available at work. The use of electronic media in e-mentoring can extend beyond mere information gathering to emotional nurturing and fellowship. Current trends in technology, which include rich multimedia communication in real time, enable emotional expression and social bonding that one typically observes in face-to-face interactions. For instance, on-line medical groups provide emotional support to patients. On-line interest groups for food aficionados or garden enthusiasts provide a sense of belonging, self-esteem and personal validation to group members as their expertise is acknowledged and support is given freely. Thus, the use of electronic media for e-mentoring gives hope to individuals that they can establish on-line relationships in which someone they’ve never met before becomes a part of their life. Being a form of social support mechanism, mentorship can be expected to migrate to electronic media. This article explores the concept of e-mentoring, the potential benefits and challenges in extending technology to relationship building and nurturing, and the role e-mentoring plays in extending t-mentoring models. It addresses the influence of e-mentoring as a supplement to t-mentoring models in filling gaps in learning and development, providing much-needed support for career-building, skill-acquisition and coaching. It concludes with action steps to promote an e-mentoring program.

The highest satisfaction ratings for mentoring relationships by protégés are typically found in informal relationships where mentor and protégé select one another out of mutual respect. Face-to-face meetings and organizational environments that foster close working relationships facilitate these informal pairings. However, barriers exist that make securing the one-on-one, face-to-face, counseling and support of a mentor difficult to attain. These barriers may be organizationally driven, may come from individual and interpersonal factors, or may be the by-product of the changing nature of work. E-mentoring can provide options that counteract these effects and improve the situation by allowing protégés access to a larger, more diverse pool of mentors. Further, the virtual nature of e-mentoring does not rely on visual cues or proximity for the relationship to succeed. E-mentoring allows for greater flexibility in maintaining open lines of communication by providing more options for how and when information interchange takes place.

E-mentoring takes advantage of technology to broaden the definition of mentoring relationships by relaxing the constraints of geographical location and time. A mentor is a guide, role model, counselor and friend. As long as these functions are being performed, the mentor’s organizational location in relation to the protégé is immaterial to the success of the e-mentoring relationship. The flexibility and convenience afforded by e-mentoring can be exploited to address barriers to mentoring. Capitalizing on technology, e-mentoring also supports the expansion of t-mentoring models beyond the typical one-to-one relationship. E-mentoring enhances these models by making them more practical and flexible to implement. E-mentoring also provides another option in support of e-learning and skill development. While research on e-mentoring is just beginning, initial concerns regarding the lack of face-to-face interaction and a decrease in the richness of communication may not be as much of an issue as initially assumed. Anecdotal and preliminary observations seem to support the finding that there may be more freedom of discussion and feedback between mentors and protégés than would have occurred outside of the electronic media. Also, fear of using mentors outside the organization is not realized. Research has shown that external mentors do not reduce organizational commitment. The Internet is clearly influencing personal interactions as a new medium for communication. The use of technology such as the Web in forming electronic relationships, including e-mentoring, is venturing into uncharted territory. The invitation is for more research into this area as e-mentoring programs proliferate. The action steps presented in the article are general guidelines upon which we can continue to build.