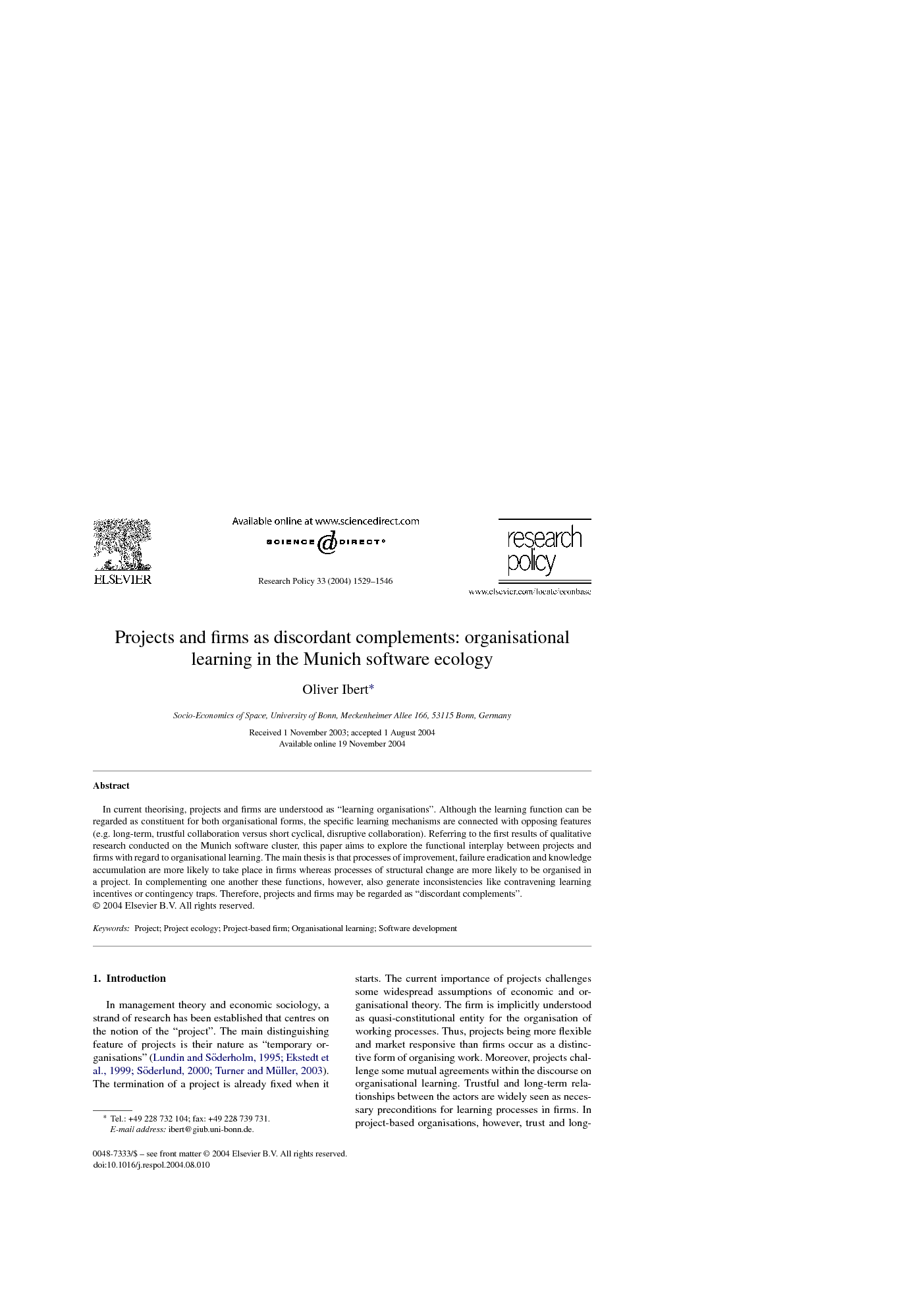 In current theorising, projects and firms are understood as “learning organisations”. Although the learning function can be regarded as constituent for both organisational forms, the specific learning mechanisms are connected with opposing features (e.g. long-term, trustful collaboration versus short cyclical, disruptive collaboration). Referring to the first results of qualitative research conducted on the Munich software cluster, this paper aims to explore the functional interplay between projects and firms with regard to organisational learning. The main thesis is that processes of improvement, failure eradication and knowledge accumulation are more likely to take place in firms whereas processes of structural change are more likely to be organised in a project. In complementing one another these functions, however, also generate inconsistencies like contravening learning incentives or contingency traps. Therefore, projects and firms may be regarded as “discordant complements”.

In management theory and economic sociology, a strand of research has been established that centres on the notion of the “project”. The main distinguishing feature of projects is their nature as “temporary organisations” (Lundin and Söderholm, 1995, Ekstedt et al., 1999, Söderlund, 2000 and Turner and Müller, 2003). The termination of a project is already fixed when it starts. The current importance of projects challenges some widespread assumptions of economic and organisational theory. The firm is implicitly understood as quasi-constitutional entity for the organisation of working processes. Thus, projects being more flexible and market responsive than firms occur as a distinctive form of organising work. Moreover, projects challenge some mutual agreements within the discourse on organisational learning. Trustful and long-term relationships between the actors are widely seen as necessary preconditions for learning processes in firms. In project-based organisations, however, trust and long-term relationships are at risk. Nevertheless the emergence of projects also derives from the idea, that they promote learning processes (Kalkowski and Mickler, 2002, Brady and Davies, 2003, Lindquist, 2003 and Scarbrough et al., 2003). Research on projects traditionally takes up a position that offers mainly an internal view of project management. Some actual research on project business (Bengtsson and Söderholm, 2002, Christopherson, 2002, DeFillippi and Arthur, 1998, Ekinsmyth, 2002, Ekstedt et al., 1999, Engwall, 2003, Gann and Salter, 2000, Gann and Salter, 2003, Grabher, 2002a, Grabher, 2002b, Grabher, 2004, Hobday, 1998, Hobday, 2000, Lundin and Hartman, 2000 and Sydow and Staber, 2002) however, goes beyond this limited scope. The notion of a “project ecology” (Grabher, 2002a and Grabher, 2004) means investigating projects as organisations embedded in a social context. Projects are located organisationally within or between firms, rely on personal networks between the actors involved, draw trust out of their institutional context, and benefit from qualifications provided by local labour markets (Grabher, 2002a). This paper analyses the interplay of projects and their social context with regard to knowledge creation and organisational learning. In favour of an in-depth analysis, the paper focuses exclusively on one dimension of project embeddedness, the functional and organisational interdependency between projects and firms. The main difference between a project and a firm is their conceptions of time. For a firm a cyclical time conception is applied, whereas the project follows a linear time conception. The firm's routines are established to deal with constantly (seasonally, monthly, daily, etc.) reoccurring tasks. By contrast, a project is created to fulfil a one-off mission. Project terminology (“milestones”, “deadlines”) also expresses a linear understanding of time. The aim of this paper is to provide an exploratory study of one dynamic industry to reveal the specific modes of organisational learning connected with projects and firms and to delineate the interplay between these modes. The theoretically deduced assumption of a complementarity between project- and firm-specific learning modes is confronted with empirical results from the Munich software ecology. In its main parts, the paper discusses the empirical evidence in three perspectives. It depicts typical modes of organisational learning within software projects (Section 3), describes ways of learning from software projects within a firm (Section 4) and focuses on the interplay between firms and projects (Section 5). This paper draws on initial results of a qualitative exploration of the software industry in Munich, conducted by the author together with Gernot Grabher in 2003.1 As Germany's biggest and most successful software cluster the Munich software ecology promised not only to reveal the key dimensions of organisational learning interdependency and conflict but also methods for overcoming typical difficulties which could be useful for industrialists and policy makers. The core empirical data consists of 32 semi-structured interviews in Munich software firms. This material is supplemented by a variety of secondary sources, including interviews conducted with software freelancers in Munich, with German software firms outside from Munich and with Bavarian state-representatives as well as data from industry reports, manuscripts written by reflecting practitioners and press releases. This empirical basis contains two methodological problems. Firstly, the software development has a twofold exceptional position that limits the scope of generalisation. Compared to traditional project businesses like house- or ship-building software development is highly learning—as well as knowledge intensive (Swart et al., 2003). Compared to other learning intensive project businesses like advertising (Grabher, 2002b) or film making (DeFillippi and Arthur, 1998), which are ruled by the imperatives of originality and creativity, the software industry offer more market incentives to recycle solutions and to reuse whole components (Grabher, 2004 and Lehrer, 2000). A computer code can be re-produced with increasing returns, since the costs for its duplication are marginal compared to the development costs. By the same token its exceptional position also offers a rare opportunity to investigate empirically a wide spectrum of organisational learning, since software development embraces creativity as well as routines, originality as well as reusability, disrupture as well as continuity. The second methodological difficulty concerns the question of in how far Munich can represent the whole software industry. Munich is exceptional with regards to a specific national context (Casper and Whitley, 2002 and Lehrer, 2000). This methodological monophthalmia is cushioned to some extent by considering additional perspectives, like papers written by reflecting software practitioners (e.g. Jurison, 1999, Siedersleben, 2003 and Crnkovic and Larsson, 2002) or empirical studies conducted by social scientists in an international context (e.g. Orlikowski, 2002 and Thompson and Heron, 2003). Moreover Munich is not representative since it is regarded as an extraordinary successful local cluster (Castells and Hall, 1994 and Sternberg and Tamásy, 1999). For an empirical investigation, however, such a strong and differentiated cluster also offers a good access to a wide variety of software projects.

This paper has introduced three types of organisational learning: ‘memory’, ‘experience’ and ‘reflection’. It has also distinguished between two forms of organisation: ‘project’ and ‘firm’. The systematic difference between them is their conception of time, a project is understood as an organisational manifestation of a linear time concept, whereas in a firm cyclical forms of organisation prevail. Theoretical considerations suppose that projects and firms should be regarded as complementary settings for organisational learning. The empirical investigation within the Munich software ecology revealed that projects are more closely connected with reflective and enactive kinds of learning, whereas firms show a stronger affinity to cumulative learning efforts such as storing organisational memories and improving experiences. The empirical evidence, however, also showed that an ecology of firms and projects is not sufficiently understood as a synergetic co-existence. The interaction of projects and firms is inextricably connected with conflict and tensions, such as contradictory learning incentives and contingency traps. Theories of project-based learning have so far concentrated on learning within a project-based firm, and therefore, have mainly looked at repeatable processes within a project-oriented business and for opportunities for developing routines. The case of software industry has been characterised as an exceptional one. It is more learning-intensive than classical project fields but it offers more opportunities for repetition and recombination than most of the typical learning intensive project businesses. The direct reuse of components has been an uncommon topic for the theory of the project-based firm hitherto. The complexity and the systemic character of production (e.g. Complex Products and Systems) typical for most learning intensive project businesses as well as their affinity towards creative outcomes (e.g. in advertising or film making) normally does not allow it. Thus, the software industry offered fascinating exploratory insights about how product modules can be recombined in successive projects, which kinds of modules are more likely to be reused than others, or which kind of strategic orientation in a firm promotes a product-centred learning strategy rather than a personalised or process-oriented one. This paper additionally approaches the phenomenon of organisational learning within project-based businesses from two further perspectives. Firstly it examines project-specific forms of organisational learning (‘problem definition’ and ‘aiming at moving targets’) and discusses their specific contribution to organisational learning. Secondly the paper emphasises the tensions that characterise an ecology populated with two kinds of organisations, the one following a linear time conception, the other cultivating a cyclical time concept. The results support my hypothesis that when it comes to organisational learning, there is not one ideal form of organisation that best fits all recommendations; rather, which organisational form is more appropriate depends on the kind of learning activity. Organisational learning in practice abides the ambivalences between different paradigms of organising and learning rather than striving for only one ideal form of organisation. Moreover organisational learning will have to struggle with ambivalences and to cope with ambiguity between conflicting considerations in an ecology of different forms of organisation rather than just benefit from their complementarities. The hypothesis that there is not one ideal form of a learning organisation could also have an impact on business technology strategies and government policies. Projects seem to be of a special strategic importance, since they represent a kind of ‘repertory of knowledge’ for firms who engage in learning-intensive industries. The involvement in projects maintains the firms’ abilities to self-organise reflective learning. Moreover projects may be regarded as ‘gateways’ through which firms acquire new knowledge assets. Public-private joint research projects may provide valuable opportunities for firms to improve and renew their knowledge assets and to gather process-experiences that will be crucial for their constant rejuvenation.