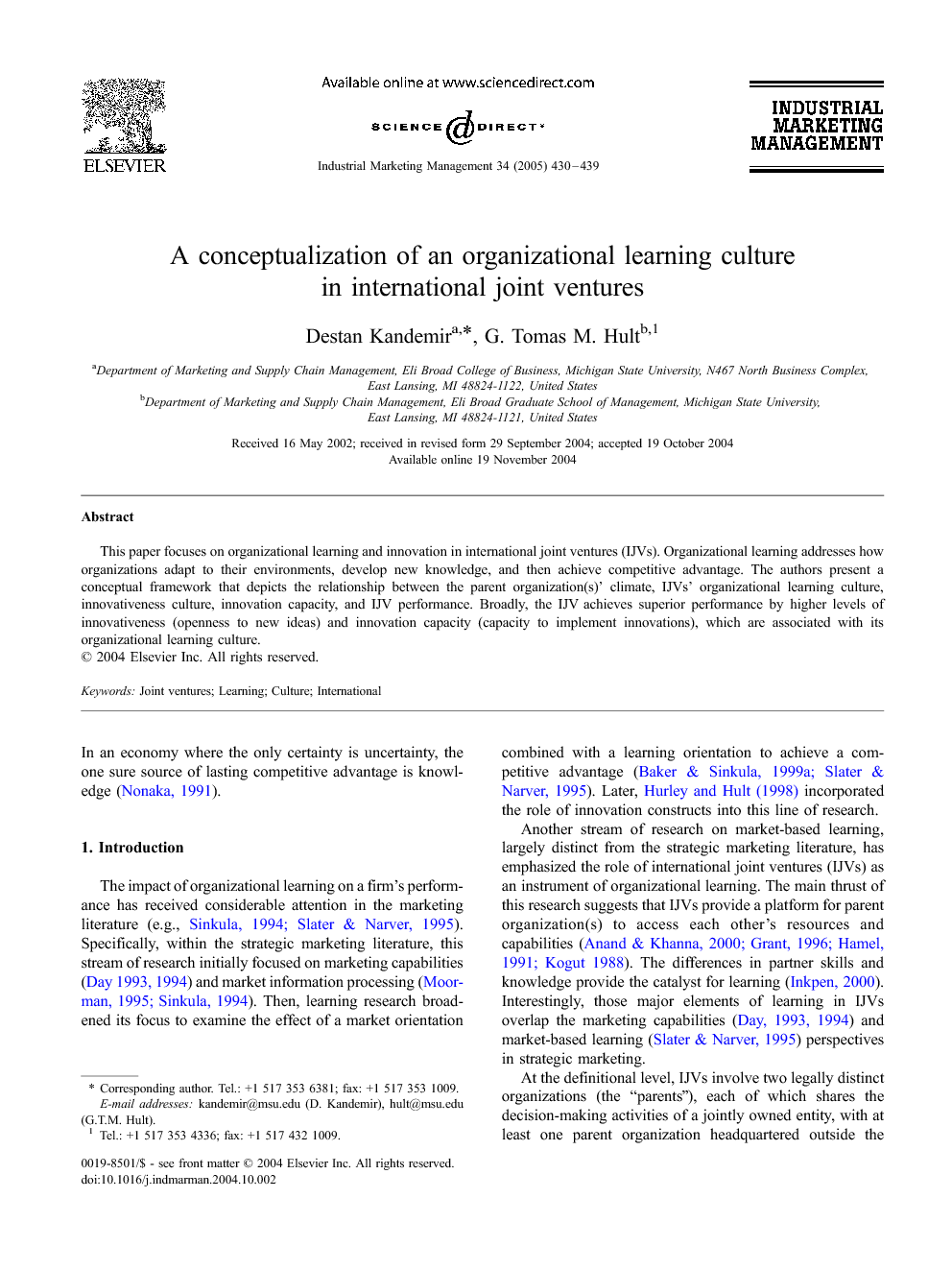 The impact of organizational learning on a firm's performance has received considerable attention in the marketing literature (e.g., Sinkula, 1994 and Slater & Narver, 1995). Specifically, within the strategic marketing literature, this stream of research initially focused on marketing capabilities (Day, 1993 and Day, 1994) and market information processing (Moorman, 1995 and Sinkula, 1994). Then, learning research broadened its focus to examine the effect of a market orientation combined with a learning orientation to achieve a competitive advantage (Baker & Sinkula, 1999a and Slater & Narver, 1995). Later, Hurley and Hult (1998) incorporated the role of innovation constructs into this line of research. Another stream of research on market-based learning, largely distinct from the strategic marketing literature, has emphasized the role of international joint ventures (IJVs) as an instrument of organizational learning. The main thrust of this research suggests that IJVs provide a platform for parent organization(s) to access each other's resources and capabilities (Anand & Khanna, 2000, Grant, 1996, Hamel, 1991 and Kogut, 1988). The differences in partner skills and knowledge provide the catalyst for learning (Inkpen, 2000). Interestingly, those major elements of learning in IJVs overlap the marketing capabilities (Day, 1993 and Day, 1994) and market-based learning (Slater & Narver, 1995) perspectives in strategic marketing. At the definitional level, IJVs involve two legally distinct organizations (the “parents”), each of which shares the decision-making activities of a jointly owned entity, with at least one parent organization headquartered outside the IJVs' country (Geringer & Hebert, 1989). Because cultural distance is an important obstacle to an IJV (cf., Buckley & Casson, 1996), the IJV in which the parent organization(s) emerge from different home countries to create a new distinct organizational entity (the “child”) seems appropriate for describing and explaining the relationship between the market-focused climate elements of parent organization(s) and the IJV's organizational learning culture. Furthermore, it is useful to focus upon one particular type of an IJV, since the manifestations of cooperative behavior can take many forms. In this paper, the IJV, which is newly established, is conceptualized as a marriage of equals in terms of ownership type, types of resources shared by parent organization(s) (e.g., market knowledge, technical knowledge, or both), and the location of the IJV (Buckley & Casson, 1996, Lyles & Salk, 1996 and Killing, 1983). Specifically, the primary interest is on 50:50 equity-based IJVs that are aimed at joint innovative efforts and motivated by the development of new technologies through R and D joint ventures, in which both parent organization(s) share technical knowledge (Buckley & Casson, 1996, Geringer & Hebert, 1989 and Kogut & Singh, 1988). Additionally, the IJV is considered to be remotely located from either parent organization, because the location of an IJV in the home country of one of the parent organization(s) may foster a dominance of that parent's influence over the venture (Killing, 1983 and Salk, 1997). The 50:50 equity-based IJVs are considered for two reasons: (1) active participation is commonly associated with having parents with equal participation in management, which is important in the formation of an organizational learning culture in newly established IJVs (Salk, 1997), and (2) effective learning and knowledge transfer is often realized in R and D joint ventures in which both parents have equal levels of equity (Killing, 1980). While such IJVs are becoming increasingly popular, scant research has been conducted to conceptualize the main market-focused climate elements driving superior IJV performance. The focus will be on the early stages of IJVs, which represent a significant period for the formation of IJV's organizational learning culture determined by the important precedents and interactions between culturally diverse management teams. Based on the above premises, the objective of the paper is to delineate the antecedents to organizational learning culture that affect innovation-based performance (including innovativeness culture and innovative capacity) of an IJV. First, the theoretical foundation for organizational learning in combination with culture is introduced. Then, a conceptual model and accompanying propositions are developed, with a specific focus on the relationship between the parent organization(s)' climate, the IJV's organizational learning culture, innovativeness culture, innovation capacity, and IJV performance. Finally, conclusions and avenues for future research are presented.