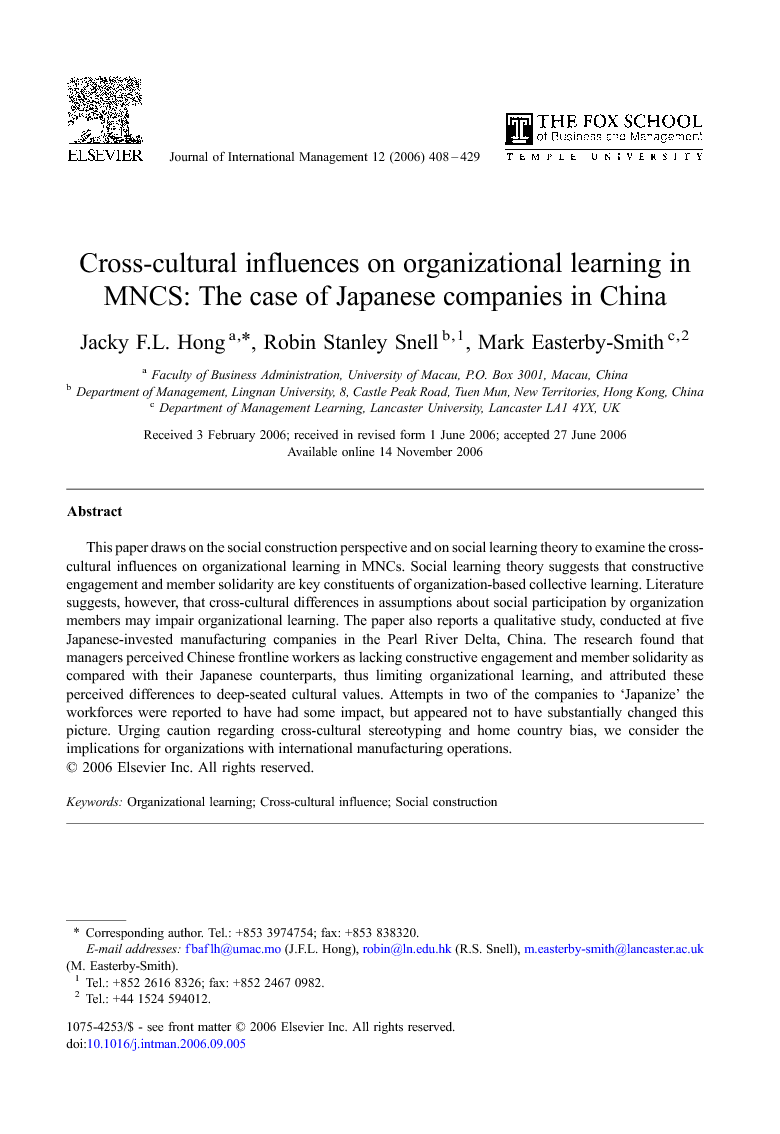 This paper draws on the social construction perspective and on social learning theory to examine the cross-cultural influences on organizational learning in MNCs. Social learning theory suggests that constructive engagement and member solidarity are key constituents of organization-based collective learning. Literature suggests, however, that cross-cultural differences in assumptions about social participation by organization members may impair organizational learning. The paper also reports a qualitative study, conducted at five Japanese-invested manufacturing companies in the Pearl River Delta, China. The research found that managers perceived Chinese frontline workers as lacking constructive engagement and member solidarity as compared with their Japanese counterparts, thus limiting organizational learning, and attributed these perceived differences to deep-seated cultural values. Attempts in two of the companies to ‘Japanize’ the workforces were reported to have had some impact, but appeared not to have substantially changed this picture. Urging caution regarding cross-cultural stereotyping and home country bias, we consider the implications for organizations with international manufacturing operations.

Schon (1983: 114) argued that the concept of organizational learning would become ‘an idea in good currency’. Since then, we have witnessed sustained interest both in academic circles and among business practitioners in pursuing the question, ‘how does an organization learn?’ (Tsang, 1997: 74). Much empirical material has been generated (Crossan and Guatto, 1996 and Easterby-Smith, 1997), and some studies have examined the application of organizational learning theories to multinational corporations (MNCs) (Bartlett and Ghoshal, 1989, Gupta and Govindarajan, 2000 and Kogut and Zander, 1993). The idea that MNCs are social communities, specialized in the acquisition and transfer of organizational knowledge (Kogut and Zander, 1993), has given rise to several studies of how MNCs manage their knowledge flows and learning processes (Martin and Salomon, 2003 and Minbaeva et al., 2003). Most of these studies adopt a cognitive/technical perspective on organizational learning (Easterby-Smith and Araujo, 1999 and Huber, 1991), focusing on the facilitating mechanisms and potential barriers involved in knowledge transfer processes between the source and recipient units within the MNC network (Gupta and Govindarajan, 2000, Jensen and Szulanski, 2004, Mudambi and Navarra, 2004 and Szulanski, 1996). The cognitive/technical perspective represents organizational learning in MNCs as the acquisition, interpretation, integration and distribution of knowledge flow between the headquarters and its subsidiaries (Gupta and Govindarajan, 2000 and Jensen and Szulanski, 2004) or among the subsidiaries themselves (Björkman et al., 2004 and Mudambi and Navarra, 2004). This emphasis, however, neglects the role of cultural assumptions. Previous studies show that national cultures have developed different social expectations and norms regarding organization-based collective learning (Carmona and Gronlund, 1998 and Hedlund and Nonaka, 1993). However, knowledge of the impact of culture on organizational learning (Cook and Yanow, 1993) remains limited, and very few studies have investigated how culture influences organizational learning in MNCs. This paper seeks to fill this gap by applying a social construction perspective (Cook and Yanow, 1993, Easterby-Smith and Araujo, 1999, Gherardi et al., 1998, Lave and Wenger, 1991, Leonard-Barton, 1992 and Yanow, 2000) to understand the nature and impact of cross-cultural differences in organizational learning. We will report a study of organization-based collective learning among Chinese frontline workers in the manufacturing plants of five Japanese MNCs in the Pearl River Delta of China. The rationale for choosing the intersection between Japanese and Chinese settings is that while the two countries have cultural similarities, there are also important differences which are not clearly understood (Fukuyama, 1995, Hall and Xu, 1990 and White and Nakamura, 2002). The two countries are also worthy of study in their own right because China is now a major economic player, increasingly important to the world economy, while Japanese manufacturing companies remain leading players in terms of international inward investment, and retain a reputation for operational-level organizational learning capabilities and systems (Fruin, 1997 and Nonaka and Takeuchi, 1995). The main contribution of the paper is to indicate the potential influence on organization-based collective learning of cultural differences in expectations about the nature and depth of organizational participation and inclusion. The rest of the paper is divided into five sections. Section 2 compares the cognitive, knowledge-oriented perspective with the socio-cultural, learning-oriented perspective, and outlines the knowledge types and learning processes associated with these two perspectives. In Section 3, we adopt a definition of national culture, review the literatures on cross-cultural value differences, with special reference to Japan and China, and identify the implications for organizational learning. In Section 4, we explain the qualitative methodology adopted for investigating the five companies in our research study. In Section 5, we compare and contrast the orientations toward organization-based collective learning of Chinese and Japanese frontline workers, as perceived, reported and illustrated by managers in our study. Finally, in Section 6, we consider alternative explanations for our findings, suggest directions for further research and identify practical implications for organizations with international manufacturing operations.

We found that Japanese expatriate managers and local Chinese managers in all five companies (1) reported differences between frontline Japanese and Chinese workers in terms of constructive engagement and member solidarity, and hence participation in organization-based collective learning, and (2) attributed to deep-seated cultural values the frontline Chinese employees' resistance to such involvement. Thus our Japanese and Chinese informants believed that national culture either shaped or limited local employees' orientation toward constructive engagement and member solidarity. These two main findings are consistent with our two theoretical propositions, which are both based on the ‘particularistic’ view (Easterby-Smith, 1998) that national cultures constitute unique sets of values and assumptions that either encourage or discourage collective learning though knowledge sharing and mutual routines (Carmona and Gronlund, 1998, Hedlund and Nonaka, 1993 and Holden, 2001). We found that managers at the two highly Japanized case companies, Canon and Kyoden, reported that the Chinese frontline employees had come to participate more in these companies' collective learning processes than in the less Japanized companies, although progress in this respect had been disappointingly slow. Whatever progress had been made was attributed to the concerted cultivation by the Japanese management of corporate values through corporate culture maintenance rituals, such as collective physical fitness exercises and office cleansing routines performed early in the morning, and through other imported enterprise contexts, such as open plan plant and office layout. Moreover, we also found that human resource management policies, programmes and practices at the host sites differed considerably from those adopted to support organizational learning in the corresponding home sites. Expatriate managers regretted this but accepted that local conditions governed what was economically and politically feasible. These findings suggest that while the host culture may present barriers to the cross-national transfer of organizational learning systems from a home country to a host country (Holden, 2001, Hong et al., 2006, Glisby and Holden, 2003 and Wensley, 2001), there are two broad principles regarding the removal of such barriers. First, importing enterprise contexts from the home country is likely to work better if these are adopted from the very beginning. Thus, it may be important to choose sites with relatively few physical constraints on appropriate plant and office architectures. Also, it may be better to introduce rituals and routines immediately, as an integral part of organization membership, rather than bringing them in later on, when they may be regarded as arbitrary impositions. Second, while policies, systems and practices regarding employee selection, performance appraisal, reward management, pre-employment socialization, job design, formal training, and other structural aspects of human resource management at the host site are constrained by local labour market needs and expectations, interpersonal elements, such as role modeling of target norms and behaviors (Alas and Sharifi, 2002), are less constrained and may help to build norms conducive to social participation in organization-based collective learning.