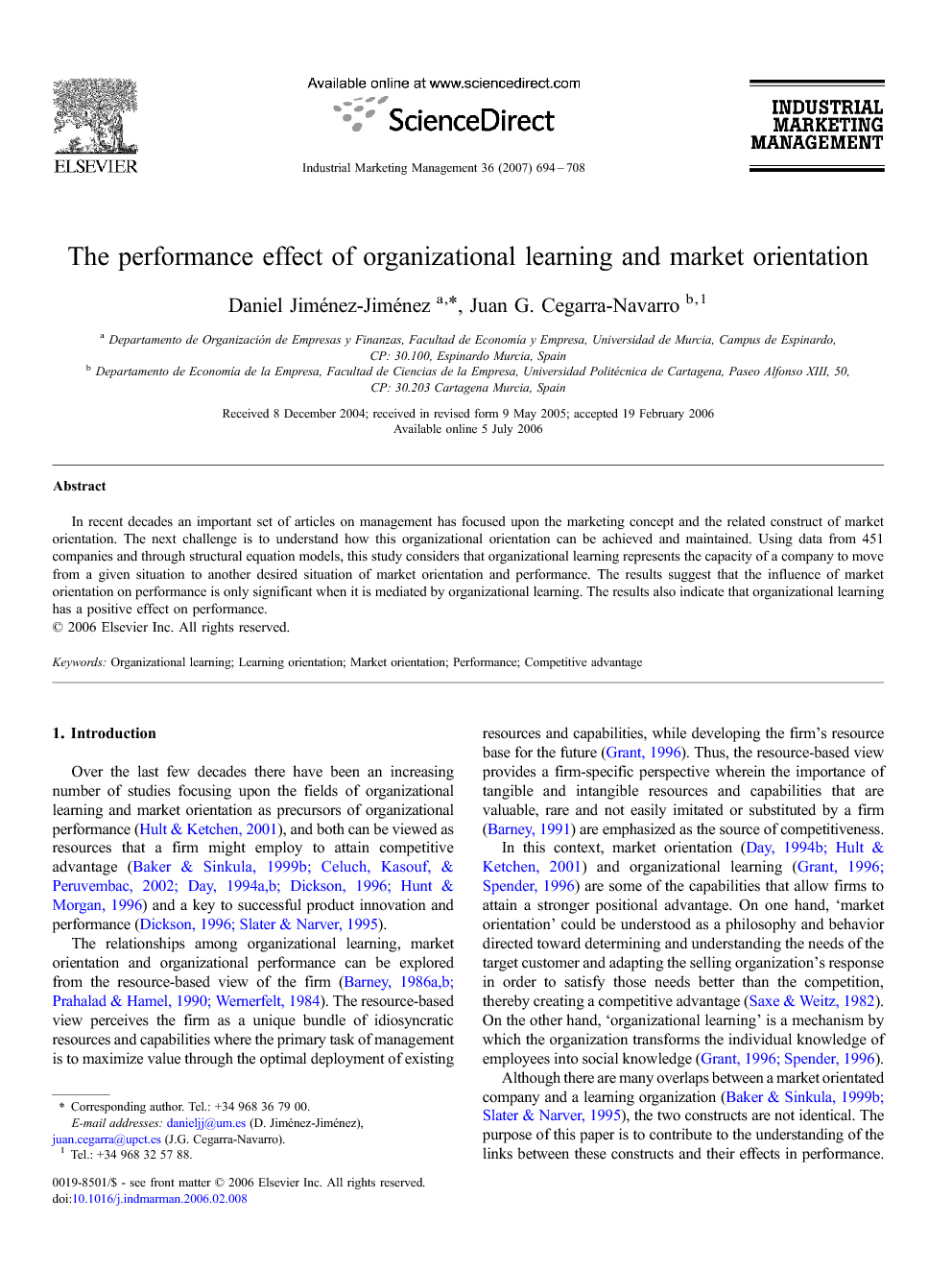 Over the last few decades there have been an increasing number of studies focusing upon the fields of organizational learning and market orientation as precursors of organizational performance (Hult & Ketchen, 2001), and both can be viewed as resources that a firm might employ to attain competitive advantage (Baker and Sinkula, 1999b, Celuch et al., 2002, Day, 1994a, Day, 1994b, Dickson, 1996 and Hunt and Morgan, 1996) and a key to successful product innovation and performance (Dickson, 1996 and Slater and Narver, 1995). The relationships among organizational learning, market orientation and organizational performance can be explored from the resource-based view of the firm (Barney, 1986a, Barney, 1986b, Prahalad and Hamel, 1990 and Wernerfelt, 1984). The resource-based view perceives the firm as a unique bundle of idiosyncratic resources and capabilities where the primary task of management is to maximize value through the optimal deployment of existing resources and capabilities, while developing the firm's resource base for the future (Grant, 1996). Thus, the resource-based view provides a firm-specific perspective wherein the importance of tangible and intangible resources and capabilities that are valuable, rare and not easily imitated or substituted by a firm (Barney, 1991) are emphasized as the source of competitiveness. In this context, market orientation (Day, 1994b and Hult and Ketchen, 2001) and organizational learning (Grant, 1996 and Spender, 1996) are some of the capabilities that allow firms to attain a stronger positional advantage. On one hand, ‘market orientation’ could be understood as a philosophy and behavior directed toward determining and understanding the needs of the target customer and adapting the selling organization's response in order to satisfy those needs better than the competition, thereby creating a competitive advantage (Saxe & Weitz, 1982). On the other hand, ‘organizational learning’ is a mechanism by which the organization transforms the individual knowledge of employees into social knowledge (Grant, 1996 and Spender, 1996). Although there are many overlaps between a market orientated company and a learning organization (Baker and Sinkula, 1999b and Slater and Narver, 1995), the two constructs are not identical. The purpose of this paper is to contribute to the understanding of the links between these constructs and their effects in performance. Specifically, we show how organizational learning is considered to be a main factor in the achievement competitive advantage. This paper is organized as follows: Firstly, we briefly review organizational learning and market orientation and their relationships with organizational performance. Next, we present the model and the hypotheses that are going to be tested in the last part of this research. Finally, the results, discussion of their implications and future research directions are presented.