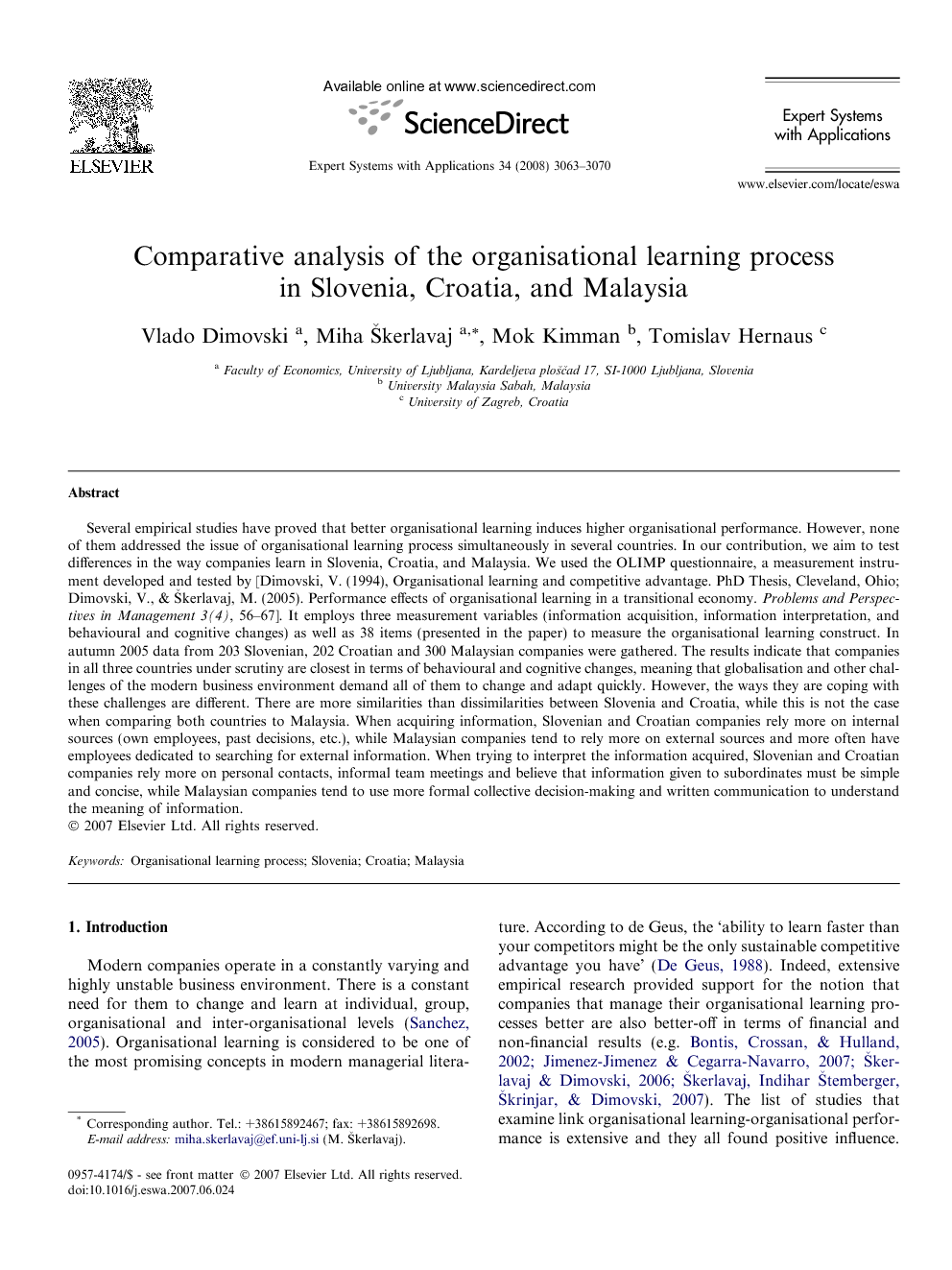 Several empirical studies have proved that better organisational learning induces higher organisational performance. However, none of them addressed the issue of organisational learning process simultaneously in several countries. In our contribution, we aim to test differences in the way companies learn in Slovenia, Croatia, and Malaysia. We used the OLIMP questionnaire, a measurement instrument developed and tested by [Dimovski, V. (1994), Organisational learning and competitive advantage. PhD Thesis, Cleveland, Ohio; Dimovski, V., & Škerlavaj, M. (2005). Performance effects of organisational learning in a transitional economy. Problems and Perspectives in Management 3(4), 56–67]. It employs three measurement variables (information acquisition, information interpretation, and behavioural and cognitive changes) as well as 38 items (presented in the paper) to measure the organisational learning construct. In autumn 2005 data from 203 Slovenian, 202 Croatian and 300 Malaysian companies were gathered. The results indicate that companies in all three countries under scrutiny are closest in terms of behavioural and cognitive changes, meaning that globalisation and other challenges of the modern business environment demand all of them to change and adapt quickly. However, the ways they are coping with these challenges are different. There are more similarities than dissimilarities between Slovenia and Croatia, while this is not the case when comparing both countries to Malaysia. When acquiring information, Slovenian and Croatian companies rely more on internal sources (own employees, past decisions, etc.), while Malaysian companies tend to rely more on external sources and more often have employees dedicated to searching for external information. When trying to interpret the information acquired, Slovenian and Croatian companies rely more on personal contacts, informal team meetings and believe that information given to subordinates must be simple and concise, while Malaysian companies tend to use more formal collective decision-making and written communication to understand the meaning of information

Modern companies operate in a constantly varying and highly unstable business environment. There is a constant need for them to change and learn at individual, group, organisational and inter-organisational levels (Sanchez, 2005). Organisational learning is considered to be one of the most promising concepts in modern managerial literature. According to de Geus, the ‘ability to learn faster than your competitors might be the only sustainable competitive advantage you have’ (De Geus, 1988). Indeed, extensive empirical research provided support for the notion that companies that manage their organisational learning processes better are also better-off in terms of financial and non-financial results (e.g. Bontis et al., 2002, Jimenez-Jimenez and Cegarra-Navarro, 2007, Škerlavaj and Dimovski, 2006 and Škerlavaj et al., 2007). The list of studies that examine link organisational learning-organisational performance is extensive and they all found positive influence. However, none of them addressed organisational learning as the process dependent upon the context of national culture in which companies operate. We aim to fill this gap in the literature by providing a cross-cultural comparison of organisational learning process in companies in three countries (two homogeneous and two heterogeneous). The research was simultaneously conducted in 2005 in Slovenia, Croatia and Malaysia in order to find an answer to the following research question: What are the differences and which are the similarities among Slovenia, Croatia and Malaysia in the way their companies learn? The organisational learning measurement instrument developed by Dimovski, 1994 and Dimovski and Škerlavaj, 2005. Data were gathered from the top and middle management representatives of companies with more than 50 employees. The paper has five main sections. First, organisational learning process is defined and compared against knowledge management and learning organisation. Second, the constructs for its measurement are described in more detail. Third, the data gathering and sample descriptions are presented. Fourth, the data are analysed using an analysis of variance methodology. Finally, the implications of our findings from research as well as managerial standpoints are discussed, while the paper is concluded with a presentation of the limitations and some future research proposals.

Organisational learning has received a lot of attention in the research community. In particular, its link towards organisational performance has been under a lot of scrutiny in recent years. While positive pattern re-emerged in practically all the samples, there is a gap in addressing the organisational learning process as contextually dependent process. One of the particular aspects of this context is national culture. We examined the process of organisational learning in Slovenian, Croatian and Malaysian companies in the pursuit of understanding the ways companies in different countries respond to the turbulent business environment and emerging challenges (see, e.g. Drucker, 2001). For that, we used a validated and reliable instrument tested on several occasions and in several contexts (Dimovski, 1994, Dimovski and Škerlavaj, 2005 and Škerlavaj et al., 2007) and obtained interesting findings. Obviously, there are processes of convergence and divergence evident from the data. Most of all, convergence can be spotted in that part which deals with behavioural and cognitive changes. Companies in all three countries need to change and adapt quickly and deeply in order to gain a competitive advantage. Changes are omnipresent and ubiquitous in modern business environment. Nevertheless, patterns of organisational learning in companies also diverge among three countries studied. When trying to acquire information, which is sometimes even considered to be a ‘fuel for modern businesses’, Slovenian and Croatian companies more often use internal sources (such as previous decisions and own employees). On the other hand, Malaysian companies rely deeply on external sources (for instance they reward employees for being source of good information, dedicate employees to searching for external information, make use of clipping services, decide to go into mergers and acquisitions and joint tasks with the intention of learning something new, employ external experts and talk to managers outside of the company). Another important issue is that, when trying to understand the meaning of the information acquired, very divergent patterns are evolving. Again, there is a duality between Malaysian on one hand and Slovenian and Croatian managers on the other. Interestingly, Malaysian companies tend to use more formal channels (written memos, committees, special reports, etc.), while Slovenian and Croatian managers more often use personal contacts and informal team meetings when trying to understand the meaning of the information they have acquired. Our findings hold some important implications for managers as well as academics. Above all, we need to consider organisational learning as a contextually dependent variable. In this particular case, the national cultural environment is implied as the contextual variable. We hope to have demonstrated an initial step in the empirical understanding of the organisational learning process in different cultural contexts, which is undoubtedly an important contribution of the paper and fills an existing gap in the literature. Future research should take an even broader scope (include more countries) and be oriented at determining clusters considering specific cultures or country groups. In this manner different approaches to the management of the organisational learning process within e.g. multinational companies could be established. Besides, the impact of the organisational learning process on organisational performance in various national settings simultaneously should be examined. The positive effect established in one-country research needs to be tested in a cross-cultural settings by using rigorous statistical methods such as multi-group structural equation modelling. In addition, the next step is to scrutinise in depth and to examine the organisational learning process in several case studies, on an individual, group and organisational, as well as relational level by using for instance the social network analysis approach to organisational learning (Škerlavaj & Dimovski, 2006). Such an approach is also trend in knowledge management field (Liebowitz, 2005). This contribution is an initial step in the exploration of organisational learning phenomena in cross-cultural settings, which offers a lot of challenging research opportunities in the years to come.