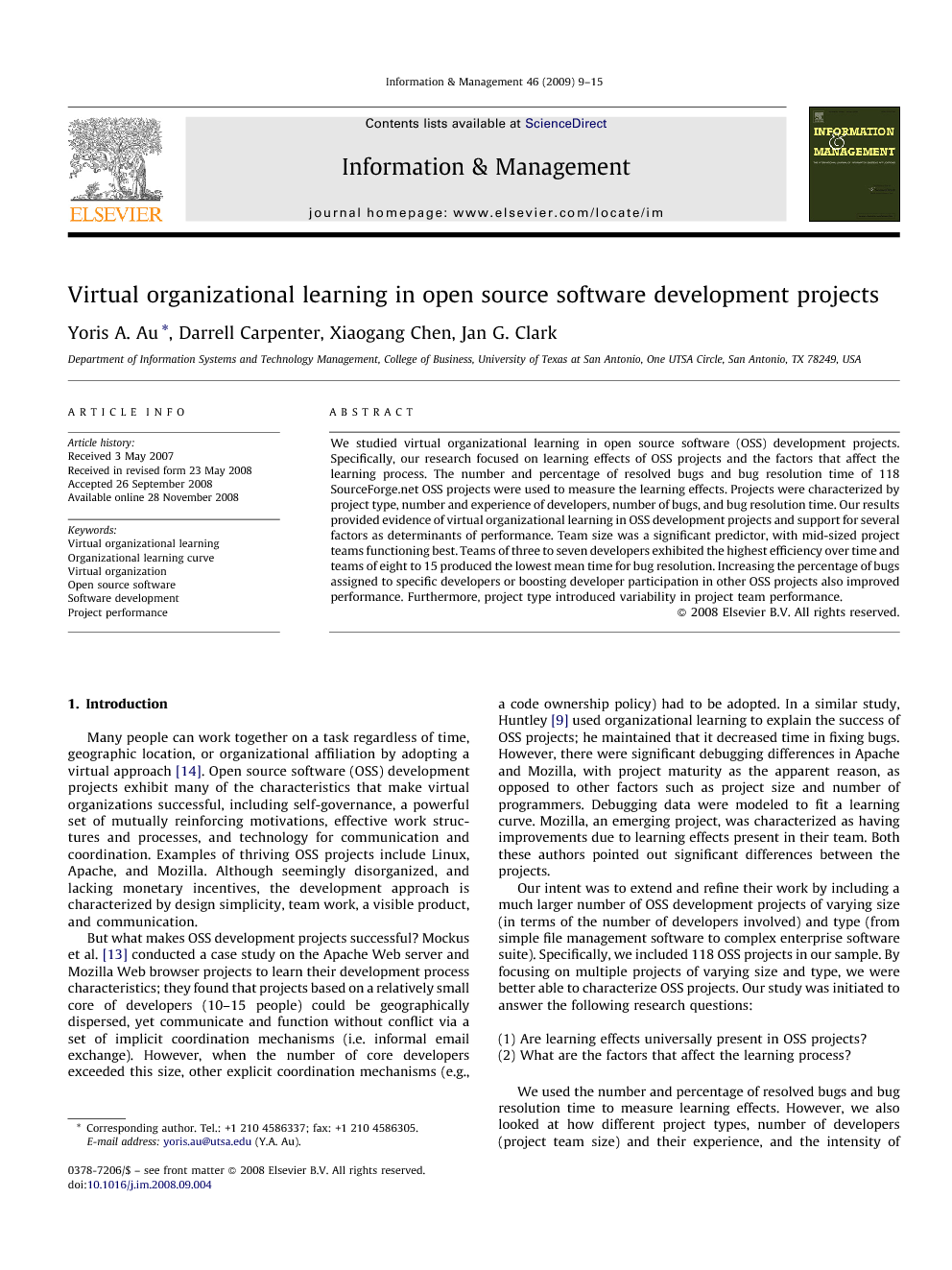 We studied virtual organizational learning in open source software (OSS) development projects. Specifically, our research focused on learning effects of OSS projects and the factors that affect the learning process. The number and percentage of resolved bugs and bug resolution time of 118 SourceForge.net OSS projects were used to measure the learning effects. Projects were characterized by project type, number and experience of developers, number of bugs, and bug resolution time. Our results provided evidence of virtual organizational learning in OSS development projects and support for several factors as determinants of performance. Team size was a significant predictor, with mid-sized project teams functioning best. Teams of three to seven developers exhibited the highest efficiency over time and teams of eight to 15 produced the lowest mean time for bug resolution. Increasing the percentage of bugs assigned to specific developers or boosting developer participation in other OSS projects also improved performance. Furthermore, project type introduced variability in project team performance.

Many people can work together on a task regardless of time, geographic location, or organizational affiliation by adopting a virtual approach [14]. Open source software (OSS) development projects exhibit many of the characteristics that make virtual organizations successful, including self-governance, a powerful set of mutually reinforcing motivations, effective work structures and processes, and technology for communication and coordination. Examples of thriving OSS projects include Linux, Apache, and Mozilla. Although seemingly disorganized, and lacking monetary incentives, the development approach is characterized by design simplicity, team work, a visible product, and communication. But what makes OSS development projects successful? Mockus et al. [13] conducted a case study on the Apache Web server and Mozilla Web browser projects to learn their development process characteristics; they found that projects based on a relatively small core of developers (10–15 people) could be geographically dispersed, yet communicate and function without conflict via a set of implicit coordination mechanisms (i.e. informal email exchange). However, when the number of core developers exceeded this size, other explicit coordination mechanisms (e.g., a code ownership policy) had to be adopted. In a similar study, Huntley [9] used organizational learning to explain the success of OSS projects; he maintained that it decreased time in fixing bugs. However, there were significant debugging differences in Apache and Mozilla, with project maturity as the apparent reason, as opposed to other factors such as project size and number of programmers. Debugging data were modeled to fit a learning curve. Mozilla, an emerging project, was characterized as having improvements due to learning effects present in their team. Both these authors pointed out significant differences between the projects. Our intent was to extend and refine their work by including a much larger number of OSS development projects of varying size (in terms of the number of developers involved) and type (from simple file management software to complex enterprise software suite). Specifically, we included 118 OSS projects in our sample. By focusing on multiple projects of varying size and type, we were better able to characterize OSS projects. Our study was initiated to answer the following research questions: (1) Are learning effects universally present in OSS projects? (2) What are the factors that affect the learning process? We used the number and percentage of resolved bugs and bug resolution time to measure learning effects. However, we also looked at how different project types, number of developers (project team size) and their experience, and the intensity of assigned bugs affected the learning rates. Data for this study were obtained from the SourceForge.net1 database.

Our study contributes to the body of literature by providing empirical evidence of virtual organizational learning in a large number of OSS development projects. Our results suggest that both adaptive and organizational learning were observed in the projects. We also found that OSS development project performance was influenced by the number of developers on the team, the amount of experience that they possessed, project category, and percentage of bugs assigned to a person. In addition, our results indicated that though smaller teams learned faster, they suffered from greater variability in efficiency. Open source developers work on projects voluntarily. As such, they tend to work on projects or tasks that they consider fun, interesting, challenging, and/or that can bring them notoriety. It is rare for traditional developers to be able to pick and choose projects or tasks. Also in OSS projects, end-users play a more interactive role. They review the actual code during development, run and test modules, suggesting modifications and even how to fix bugs. Reliability and decreased cost are often cited as benefits of OSS [1]. There appears to be a camaraderie among the OSS community in which the lesser skilled developers can learn from the more experienced ones [21]. Development costs are lower because many, if not all, developers are volunteers. However, the cost of using the actual software may not be less. End-users and support staff still need training and more resources may be required to take full advantage of the software.