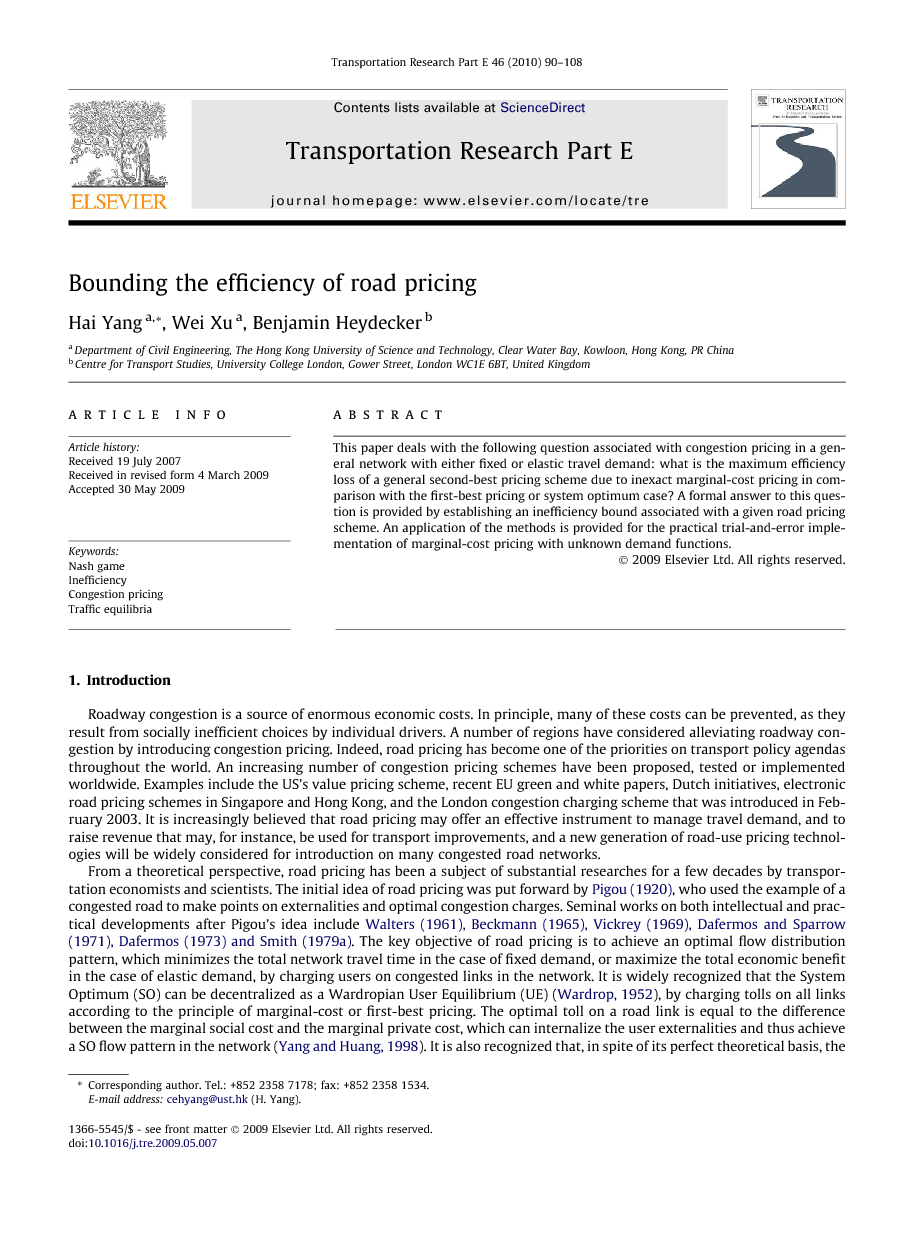 This paper deals with the following question associated with congestion pricing in a general network with either fixed or elastic travel demand: what is the maximum efficiency loss of a general second-best pricing scheme due to inexact marginal-cost pricing in comparison with the first-best pricing or system optimum case? A formal answer to this question is provided by establishing an inefficiency bound associated with a given road pricing scheme. An application of the methods is provided for the practical trial-and-error implementation of marginal-cost pricing with unknown demand functions.

Roadway congestion is a source of enormous economic costs. In principle, many of these costs can be prevented, as they result from socially inefficient choices by individual drivers. A number of regions have considered alleviating roadway congestion by introducing congestion pricing. Indeed, road pricing has become one of the priorities on transport policy agendas throughout the world. An increasing number of congestion pricing schemes have been proposed, tested or implemented worldwide. Examples include the US’s value pricing scheme, recent EU green and white papers, Dutch initiatives, electronic road pricing schemes in Singapore and Hong Kong, and the London congestion charging scheme that was introduced in February 2003. It is increasingly believed that road pricing may offer an effective instrument to manage travel demand, and to raise revenue that may, for instance, be used for transport improvements, and a new generation of road-use pricing technologies will be widely considered for introduction on many congested road networks. From a theoretical perspective, road pricing has been a subject of substantial researches for a few decades by transportation economists and scientists. The initial idea of road pricing was put forward by Pigou (1920), who used the example of a congested road to make points on externalities and optimal congestion charges. Seminal works on both intellectual and practical developments after Pigou’s idea include Walters, 1961, Beckmann, 1965, Vickrey, 1969, Dafermos and Sparrow, 1971, Dafermos, 1973 and Smith, 1979a. The key objective of road pricing is to achieve an optimal flow distribution pattern, which minimizes the total network travel time in the case of fixed demand, or maximize the total economic benefit in the case of elastic demand, by charging users on congested links in the network. It is widely recognized that the System Optimum (SO) can be decentralized as a Wardropian User Equilibrium (UE) (Wardrop, 1952), by charging tolls on all links according to the principle of marginal-cost or first-best pricing. The optimal toll on a road link is equal to the difference between the marginal social cost and the marginal private cost, which can internalize the user externalities and thus achieve a SO flow pattern in the network (Yang and Huang, 1998). It is also recognized that, in spite of its perfect theoretical basis, the first-best pricing scheme is of little practical interest. The problem stems from the fact that it is impractical to charge users on each network link in view of the operating cost and public acceptance. Due to the imperfection of the first-best pricing from a political and technical implementation perspective, the second-best charging schemes are more practically relevant, and indeed have received ample attention recently. A wide variety of second-best pricing schemes in general networks are developed to determine the optimal tolls for system performance optimization, under given physical and economic pricing constraints. Readers are suggested to refer to Yang and Huang, 2005 and Lawphongpanich et al., 2006 for recent comprehensive treatments of the first-best and second-best pricing problems in general networks. Among the various social, economic and technical issues associated with congestion pricing in general traffic networks, the following question is of particular interest here: what is the maximum efficiency loss of a general second-best pricing scheme due to inexact marginal-cost pricing in comparison with the first-best pricing or system optimum case? Clearly, a formal answer to this question should prove to be very important and meaningful for design and evaluation of actual pricing schemes in the presence of pricing constraints. In this paper we make a full investigation of the posted questions in the spirit of ‘price of anarchy’, a term that was first dubbed and used recently for bounding the inefficiency of equilibria in non-atomic congestion games (Papadimitriou, 2001). The price of anarchy for a non-atomic congestion game is determined by looking for the worst possible ratio between the total cost incurred by players in an equilibrium situation and in an outcome of minimum-possible total cost or system optimum; it has been examined by, for example, Roughgarden, 2003, Chau and Sim, 2003, Roughgarden and Tardos, 2004, Perakis, 2004, Correa et al., 2004 and Correa et al., 2005. It is suggested that readers refer to Roughgarden (2005) for a recent comprehensive review of this emerging research subject. The paper is organized below. In next section, we present our bounding results of the efficiency loss in terms of total system travel time minimization for an arbitrary congestion pricing scheme with fixed demand; we show that our new bounding formula can generate the existing results of price of anarchy for self-routing in the special case of zero pricing, and lead to zero efficiency loss or maximum efficiency gain in the special case of first-best pricing. In Section 3, we extend the bounding methods to the general congestion pricing scheme with elastic demand using social welfare as a system performance measure. In Section 4, we propose and discuss briefly an alternative bounding approach to the problems of interest. In Section 5, we provide an application of the proposed efficiency bounding methods for the practical trial-and-error implementation of the congestion pricing problem with unknown demand functions. General conclusions and suggestions for further researches are given in Section 6.

In this paper we examined the efficiency loss of a second-best congestion pricing scheme in general networks due to inexact marginal-cost pricing, with either fixed or elastic demand. We established the upper bound of the efficiency loss of a given congestion pricing scheme in the spirit of ‘price of anarchy’ that appeared in recent literature for bounding the inefficiency of equilibria in non-atomic congestion games. We show that our new bounding formula can generate the existing price of anarchy results for self-routing in the special case of zero pricing, and lead to zero efficiency loss or maximum efficiency gain in the special case of first-best marginal-cost pricing. In the general case of any given second-best pricing scheme, the inefficiency bound can be calculated with limited information. An application of the proposed inefficiency bounding methods is provided to assess the accuracy of inexact marginal-cost pricing in the sequential experimental pricing process with unknown demand functions developed previously. We acknowledge that the method developed in this study is restricted to the standard traffic equilibrium problem, it can be further extended in a few manners: (1) to generalize the results to the case of non-separable and asymmetric link cost and OD demand functions (Perakis, 2004); (2) to extend the bounding method to the general traffic restraint and road pricing problem in capacitated networks (Yang and Bell, 1997 and Correa et al., 2004) and (3) to bound the efficiency of second-best anonymous toll patterns for multiclass-user transportation networks (Yang and Huang, 2004).