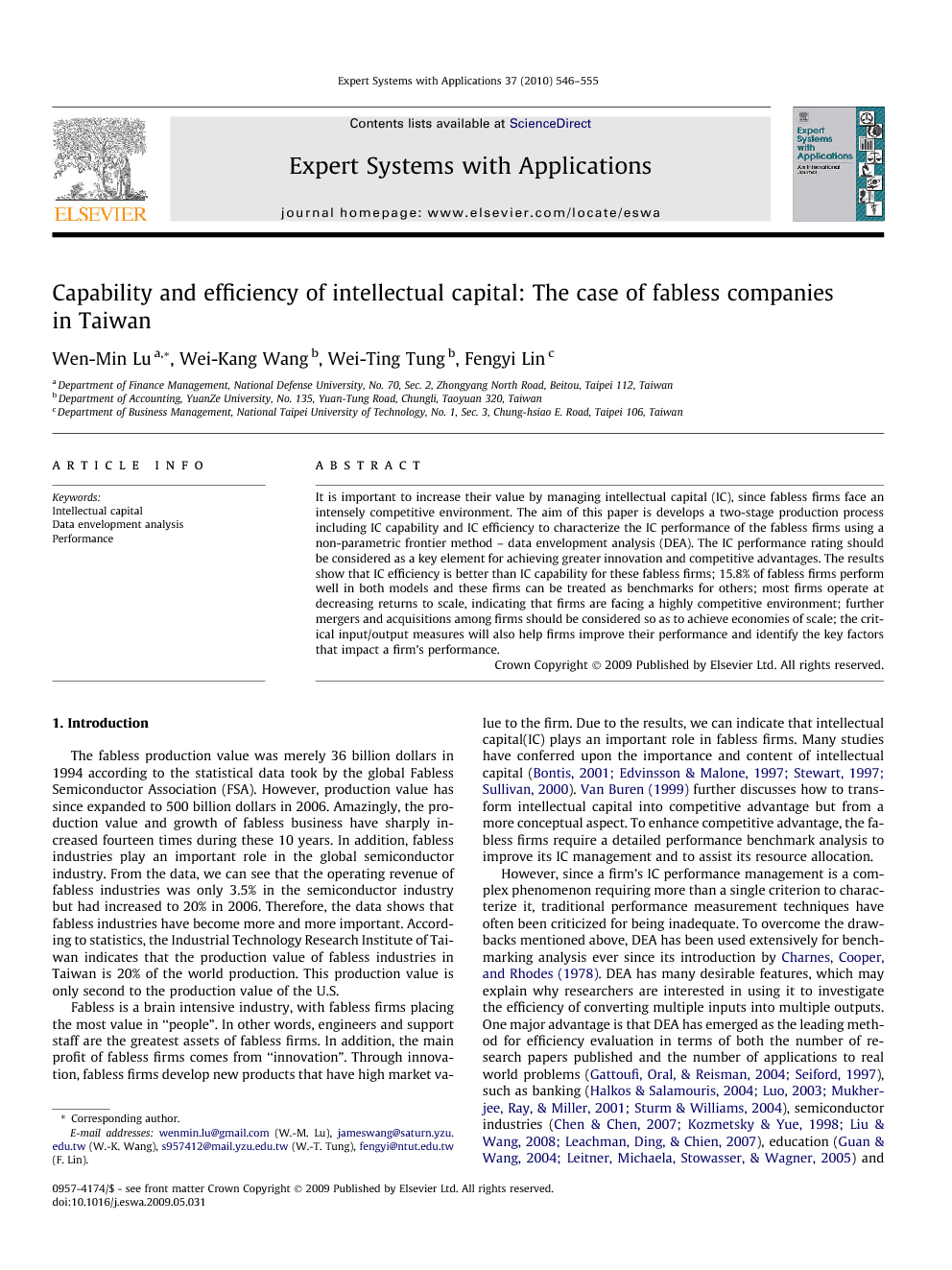 It is important to increase their value by managing intellectual capital (IC), since fabless firms face an intensely competitive environment. The aim of this paper is develops a two-stage production process including IC capability and IC efficiency to characterize the IC performance of the fabless firms using a non-parametric frontier method – data envelopment analysis (DEA). The IC performance rating should be considered as a key element for achieving greater innovation and competitive advantages. The results show that IC efficiency is better than IC capability for these fabless firms; 15.8% of fabless firms perform well in both models and these firms can be treated as benchmarks for others; most firms operate at decreasing returns to scale, indicating that firms are facing a highly competitive environment; further mergers and acquisitions among firms should be considered so as to achieve economies of scale; the critical input/output measures will also help firms improve their performance and identify the key factors that impact a firm’s performance.

The fabless production value was merely 36 billion dollars in 1994 according to the statistical data took by the global Fabless Semiconductor Association (FSA). However, production value has since expanded to 500 billion dollars in 2006. Amazingly, the production value and growth of fabless business have sharply increased fourteen times during these 10 years. In addition, fabless industries play an important role in the global semiconductor industry. From the data, we can see that the operating revenue of fabless industries was only 3.5% in the semiconductor industry but had increased to 20% in 2006. Therefore, the data shows that fabless industries have become more and more important. According to statistics, the Industrial Technology Research Institute of Taiwan indicates that the production value of fabless industries in Taiwan is 20% of the world production. This production value is only second to the production value of the U.S. Fabless is a brain intensive industry, with fabless firms placing the most value in “people”. In other words, engineers and support staff are the greatest assets of fabless firms. In addition, the main profit of fabless firms comes from “innovation”. Through innovation, fabless firms develop new products that have high market value to the firm. Due to the results, we can indicate that intellectual capital(IC) plays an important role in fabless firms. Many studies have conferred upon the importance and content of intellectual capital (Bontis, 2001, Edvinsson and Malone, 1997, Stewart, 1997 and Sullivan, 2000). Van Buren (1999) further discusses how to transform intellectual capital into competitive advantage but from a more conceptual aspect. To enhance competitive advantage, the fabless firms require a detailed performance benchmark analysis to improve its IC management and to assist its resource allocation. However, since a firm’s IC performance management is a complex phenomenon requiring more than a single criterion to characterize it, traditional performance measurement techniques have often been criticized for being inadequate. To overcome the drawbacks mentioned above, DEA has been used extensively for benchmarking analysis ever since its introduction by Charnes, Cooper, and Rhodes (1978). DEA has many desirable features, which may explain why researchers are interested in using it to investigate the efficiency of converting multiple inputs into multiple outputs. One major advantage is that DEA has emerged as the leading method for efficiency evaluation in terms of both the number of research papers published and the number of applications to real world problems (Gattoufi et al., 2004 and Seiford, 1997), such as banking (Halkos and Salamouris, 2004, Luo, 2003, Mukherjee et al., 2001 and Sturm and Williams, 2004), semiconductor industries (Chen and Chen, 2007, Kozmetsky and Yue, 1998, Liu and Wang, 2008 and Leachman et al., 2007), education (Guan and Wang, 2004 and Leitner et al., 2005) and medical treatment (Marathe et al., 2007, Pilyavsky et al., 2006 and Rouse and Swales, 2006). First of all, this study developed a two-stage production model to access the capability of creating IC and the efficiency of IC increasing a firms’ value. DEA is particularly useful for practitioners to adopt benchmarking, as firms can easily identify the efforts required to catch up with benchmarking partners by examining their performance to find out which firm most efficiently utilizes its IC to maximize the firms’ value. The advantage of the two-stage model is not only to measure the relationship between inputs and outputs but also to consider the whole production process. This can create a more complete explanation for the analysis results. Secondly, this paper examines the relation between the capability and the efficiency of IC. This study discusses whether the efficiency of creating firms’ value is affected by the capability of creating IC. A cross-tabulation is employed to illustrate the difference between the capability and the efficiency of IC in order to discover the common point in firms which perform highly capable and efficient IC. Thirdly, the critical input/output measure is discussed. For an efficient firm, the performance of IC is determined and characterized by the best practice status. For an inefficient firm, the performance of IC is determined and characterized by the distance to the frontier. Thus, an important measure of IC performance should be characterized by whether or not it is the best practice used to measure firm efficiency for both efficient and inefficient firms. There are three more sections aside from this introductory section. Following this section, the relationship literature is reviewed. We introduce the research design and data selection in the next section. In the ensuing section, this study presents the empirical results and analysis. Finally, conclusions are given in the last section.

During a knowledge-based age, IC resources can be a source of main competitive advantage in fabless firms. Furthermore, IC is not only can be a competitive advantage, but also create a firm’s value. Many empirical studies point out that there are relationships between IC and firm’s performance. However, there is hardly any research that explores IC production process and evaluates IC efficiency to create a firm’s value. This research develops an IC production process and focuses on the efficiency of IC of fabless firms in Taiwan using DEA as an empirical instrument. Through data collection and DEA analysis, we reach the following conclusions. Our findings can briefly be concluded as the following: first, after comparing the mean scores of both models, we can conclude that IC efficiency is better than IC capability. This result indicated that even though some firms do not perform well in creating IC, these firms still can effectively create firms’ tangible and intangible value. Therefore, managers should spend most of their efforts in creating IC for inefficient firms. Secondly, 15.8% of the fabless firms performed well in both models and these firms can be treated as benchmarks for the other firms. Those fabless firms are top 10 of the market value in Taiwan include Mediatek, Novatek, Sunplus, Faraday and Phison. This shows that if a firm has excellent performance in both IC capability and IC efficiency models, it should effectively increase firms’ tangible and intangible value. Third, most firms operate at decreasing returns to scale, indicating that firms are facing a highly competitive environment. This also reveals that further mergers and acquisitions among firms should be considered so as to achieve economies of scale. Fourth, firms should use critical input/output measures to help them improve their performance and identify the key factors that impact their performance. Our findings can serve as a guide in the fabless firms in increasing competitive advantage. A further investigation would be the examination of performance over time (panel data) by using Malmquist productivity change index techniques. Such an approach would allow a dynamic view of the multidimensional performance. It is also hoped that the models and methods used in this study can bring about other related research in other industries.