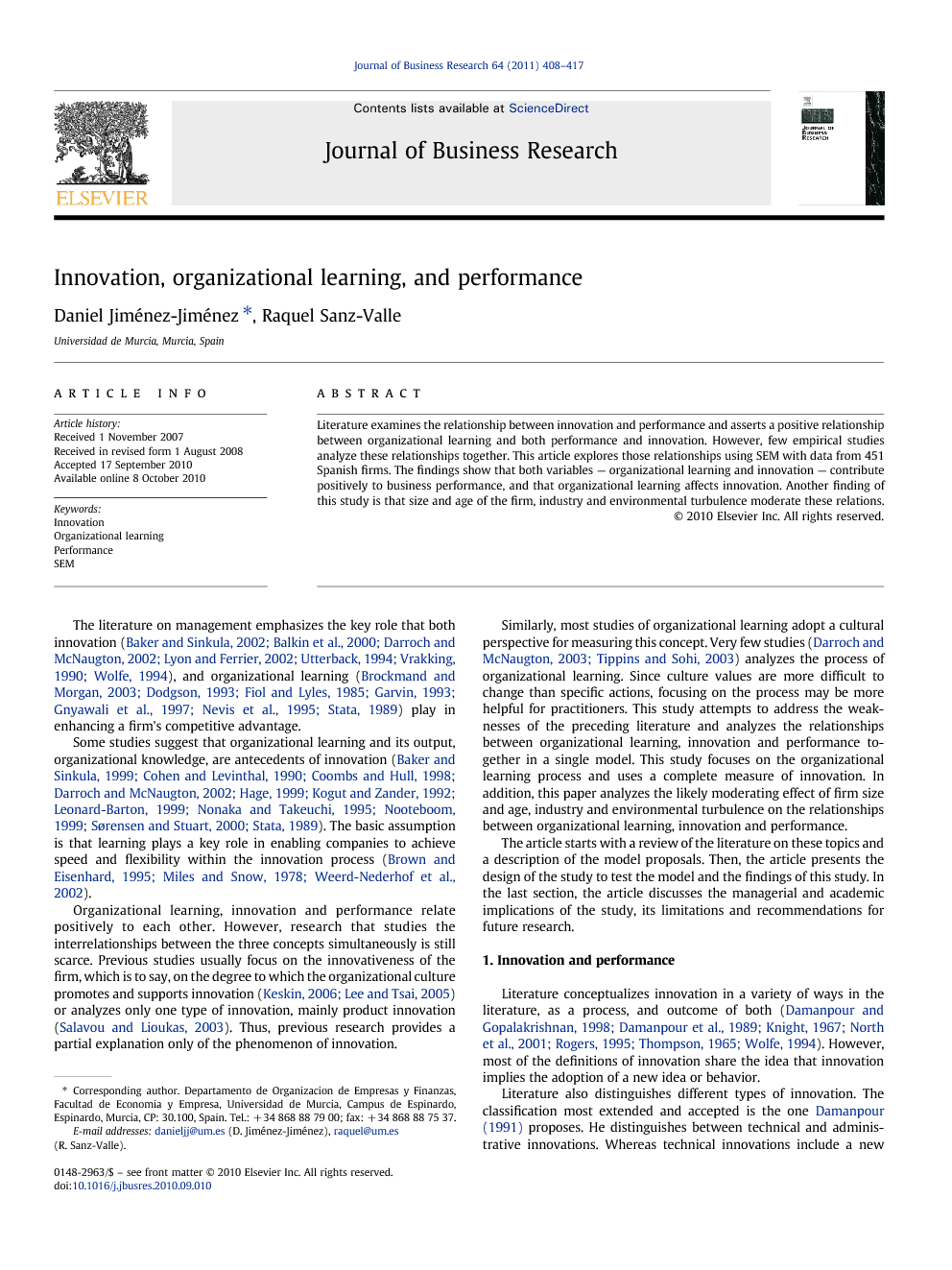 The literature on management emphasizes the key role that both innovation (Baker and Sinkula, 2002, Balkin et al., 2000, Darroch and McNaugton, 2002, Lyon and Ferrier, 2002, Utterback, 1994, Vrakking, 1990 and Wolfe, 1994), and organizational learning (Brockmand and Morgan, 2003, Dodgson, 1993, Fiol and Lyles, 1985, Garvin, 1993, Gnyawali et al., 1997, Nevis et al., 1995 and Stata, 1989) play in enhancing a firm's competitive advantage. Some studies suggest that organizational learning and its output, organizational knowledge, are antecedents of innovation (Baker and Sinkula, 1999, Cohen and Levinthal, 1990, Coombs and Hull, 1998, Darroch and McNaugton, 2002, Hage, 1999, Kogut and Zander, 1992, Leonard-Barton, 1999, Nonaka and Takeuchi, 1995, Nooteboom, 1999, Sørensen and Stuart, 2000 and Stata, 1989). The basic assumption is that learning plays a key role in enabling companies to achieve speed and flexibility within the innovation process (Brown and Eisenhard, 1995, Miles and Snow, 1978 and Weerd-Nederhof et al., 2002). Organizational learning, innovation and performance relate positively to each other. However, research that studies the interrelationships between the three concepts simultaneously is still scarce. Previous studies usually focus on the innovativeness of the firm, which is to say, on the degree to which the organizational culture promotes and supports innovation (Keskin, 2006 and Lee and Tsai, 2005) or analyzes only one type of innovation, mainly product innovation (Salavou and Lioukas, 2003). Thus, previous research provides a partial explanation only of the phenomenon of innovation. Similarly, most studies of organizational learning adopt a cultural perspective for measuring this concept. Very few studies (Darroch and McNaugton, 2003 and Tippins and Sohi, 2003) analyzes the process of organizational learning. Since culture values are more difficult to change than specific actions, focusing on the process may be more helpful for practitioners. This study attempts to address the weaknesses of the preceding literature and analyzes the relationships between organizational learning, innovation and performance together in a single model. This study focuses on the organizational learning process and uses a complete measure of innovation. In addition, this paper analyzes the likely moderating effect of firm size and age, industry and environmental turbulence on the relationships between organizational learning, innovation and performance. The article starts with a review of the literature on these topics and a description of the model proposals. Then, the article presents the design of the study to test the model and the findings of this study. In the last section, the article discusses the managerial and academic implications of the study, its limitations and recommendations for future research.