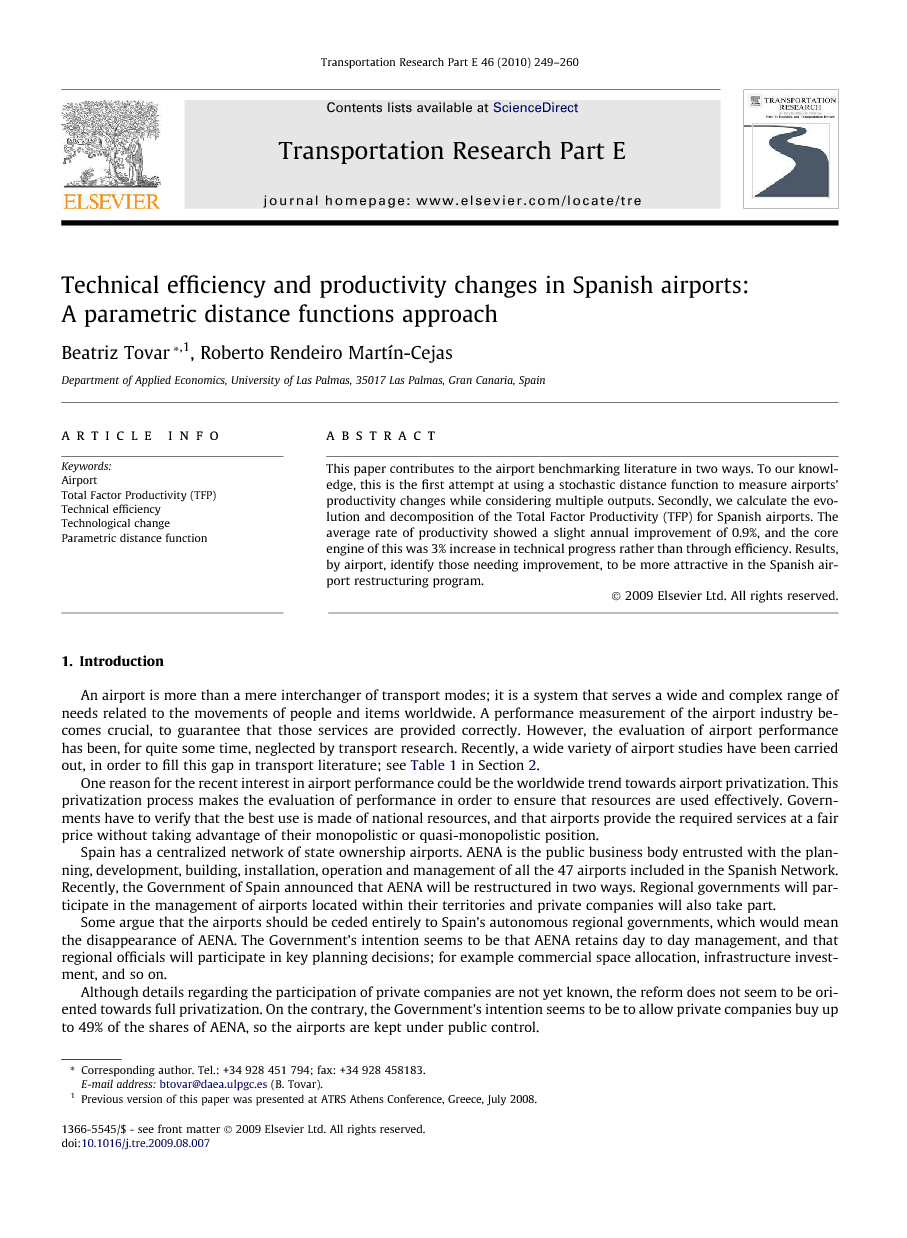 This paper contributes to the airport benchmarking literature in two ways. To our knowledge, this is the first attempt at using a stochastic distance function to measure airports’ productivity changes while considering multiple outputs. Secondly, we calculate the evolution and decomposition of the Total Factor Productivity (TFP) for Spanish airports. The average rate of productivity showed a slight annual improvement of 0.9%, and the core engine of this was 3% increase in technical progress rather than through efficiency. Results, by airport, identify those needing improvement, to be more attractive in the Spanish airport restructuring program.

An airport is more than a mere interchanger of transport modes; it is a system that serves a wide and complex range of needs related to the movements of people and items worldwide. A performance measurement of the airport industry becomes crucial, to guarantee that those services are provided correctly. However, the evaluation of airport performance has been, for quite some time, neglected by transport research. Recently, a wide variety of airport studies have been carried out, in order to fill this gap in transport literature; see Table 1 in Section 2. One reason for the recent interest in airport performance could be the worldwide trend towards airport privatization. This privatization process makes the evaluation of performance in order to ensure that resources are used effectively. Governments have to verify that the best use is made of national resources, and that airports provide the required services at a fair price without taking advantage of their monopolistic or quasi-monopolistic position. Spain has a centralized network of state ownership airports. AENA is the public business body entrusted with the planning, development, building, installation, operation and management of all the 47 airports included in the Spanish Network. Recently, the Government of Spain announced that AENA will be restructured in two ways. Regional governments will participate in the management of airports located within their territories and private companies will also take part. Some argue that the airports should be ceded entirely to Spain’s autonomous regional governments, which would mean the disappearance of AENA. The Government’s intention seems to be that AENA retains day to day management, and that regional officials will participate in key planning decisions; for example commercial space allocation, infrastructure investment, and so on. Although details regarding the participation of private companies are not yet known, the reform does not seem to be oriented towards full privatization. On the contrary, the Government’s intention seems to be to allow private companies buy up to 49% of the shares of AENA, so the airports are kept under public control. Whatever these future changes may be, a deep knowledge of the performance of Spanish airports will be useful; and that is the main goal of this paper. We attempt to analyze the technical efficiency and productive change for Spanish airport using a parametric distance function approach. The reason behind the selection of this function lies in its advantages which are discussed later. The estimated parameters enable us to calculate the evolution of the Total Factor Productivity (TFP) and its decomposition, thus showing the airports attractiveness for the agent involved in the restructuration process of the Spanish airports. This paper is organized as follows. First, in Section 2, we undertake a review of the literature on airport productivity analysis. Subsequently, in Section 3, we describe our methodological approach. Afterwards, in Section 4, we present our estimation of the distance function for a sample of Spanish airports, and the results are discussed. Finally, we present our conclusions.

As we have previously seen, almost all of the papers have used the non-parametric DEA approach to analyze airport productivity. In this study the productivity change of Spanish airports was analyzed using a parametric technique. The estimation of a best frontier for Spanish airports was made using Stochastic Frontier Analysis. Our paper relies on a distance function, which can be considered as a multiple output version of a production frontier. To analyze the productivity change and its decomposition, the Malmquist TFP index was used. The empirical evidence found in this study is similar to that in the literature reviewed. Hub airports showed an above average level of efficiency. We also found a significant difference in efficiency between mainland airports and island airports. Moreover, airports in the north of Spain seem to be more efficient than those in the south. In general terms, we found that, for our airport sample, the average rate of productivity showed a slight annual improvement of 0.9%, and the core engine was the 3% increase in technical progress, rather than improvements in efficiency. This can be explained because during the period studied, AENA, the public enterprise that manages the Spanish Airport Network, developed an ambitious investment programme to modernize Spanish airports. This programme started in the early 1990s and is still continuing. With the exception of Pamplona, Santander and Jerez, there was rapid technological change in all airports. Tourist airports had the same rate of technical change as the two hubs Madrid and Barcelona. Only these two hubs airports showed a significant improvement in pure technical efficiency. According to our sample, any efficiency change associated with airport size was negligible. According to our results, it is obvious that not all airports are in the same position in terms of the privatization and decentralization process. Those airports located on a frontier, and with a good performance level, may be more attractive for the agents involved in the restructuration process; i.e. the regional government and private capital. However, private capital could also be interested in less efficient airports, if they have good potential to improve. Our results indicate which airports need more attention, in order to improve their results. In any case, the information about efficiency level is valuable.