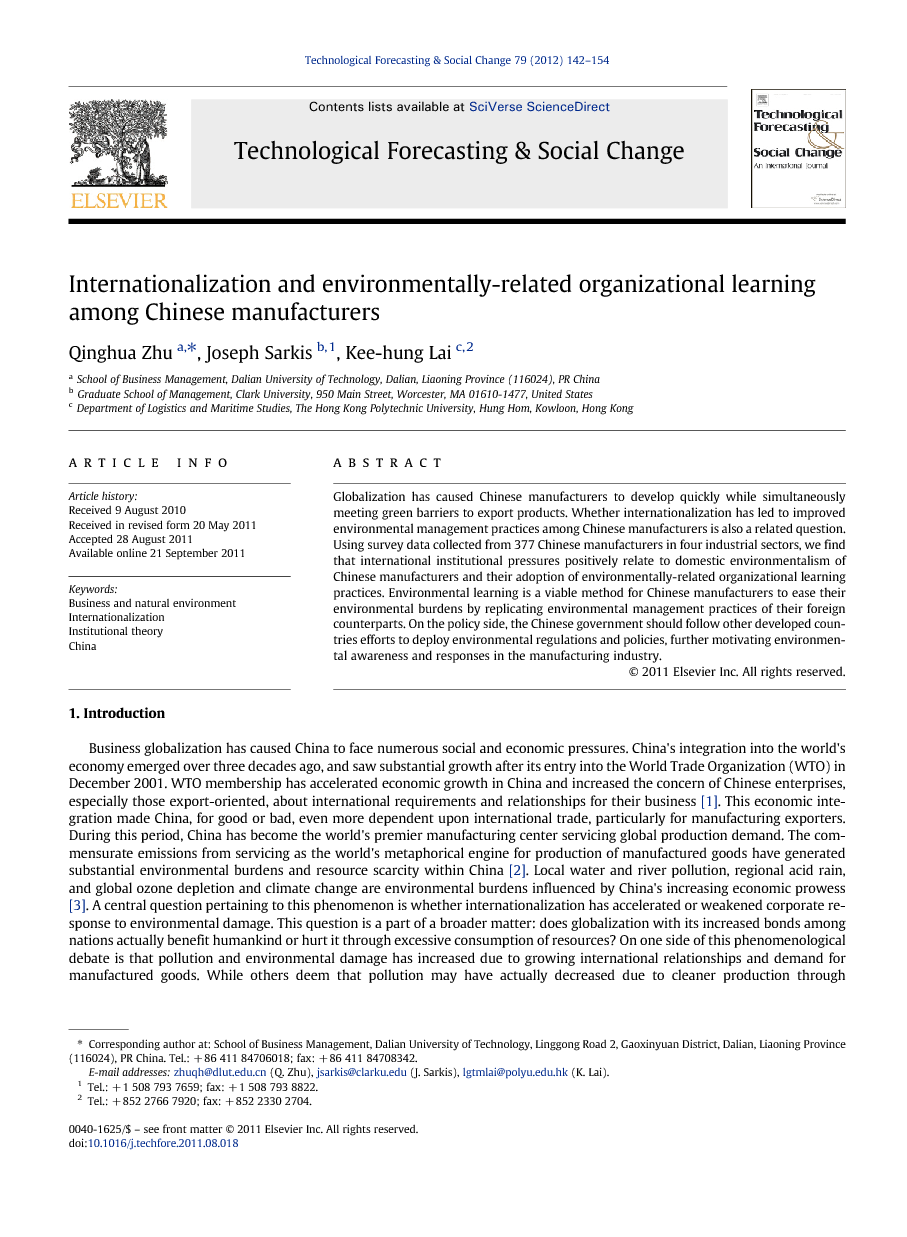 Business globalization has caused China to face numerous social and economic pressures. China's integration into the world's economy emerged over three decades ago, and saw substantial growth after its entry into the World Trade Organization (WTO) in December 2001. WTO membership has accelerated economic growth in China and increased the concern of Chinese enterprises, especially those export-oriented, about international requirements and relationships for their business [1]. This economic integration made China, for good or bad, even more dependent upon international trade, particularly for manufacturing exporters. During this period, China has become the world's premier manufacturing center servicing global production demand. The commensurate emissions from servicing as the world's metaphorical engine for production of manufactured goods have generated substantial environmental burdens and resource scarcity within China [2]. Local water and river pollution, regional acid rain, and global ozone depletion and climate change are environmental burdens influenced by China's increasing economic prowess [3]. A central question pertaining to this phenomenon is whether internationalization has accelerated or weakened corporate response to environmental damage. This question is a part of a broader matter: does globalization with its increased bonds among nations actually benefit humankind or hurt it through excessive consumption of resources? On one side of this phenomenological debate is that pollution and environmental damage has increased due to growing international relationships and demand for manufactured goods. While others deem that pollution may have actually decreased due to cleaner production through environmental learning mechanisms from leading multinational companies that otherwise would have seen unfettered environmental damage [4]. Internationalization brings opportunities for organizational learning among companies from different countries [5]. Environmentally-oriented organizational learning (EOL), which can be defined as implementing corporate environmental management practices through acquisition and development of organizational knowledge [6], is a viable method for Chinese manufacturers to relieve environmental burdens by acquiring knowledge and learning from their foreign parent companies and counterparts [7]. Greater environmental burdens from internationalization result in stronger policy as well as the implementation of stricter environmental laws and regulations in China. These environmental burdens have raised commensurate environmental awareness of the public on pollution prevention and resources conservation [8]. Such growth in domestic environmentalism also promotes greater attention to environmental management practices such as EOL among Chinese manufacturers. Many studies have examined the effect of internationalization, especially concerning China's entry into the WTO, on economic development within China [9], [10] and [11]. Environmental impacts due to the WTO accession and related environmental negotiations have also been studied [8]. Product manufacturers, particularly those in vibrant developing regions such as China, have been targeted as major polluters and energy consumers in their efforts to sustain economic growth. However, whether market internationalization affects environmental management practices among Chinese manufacturers still remains an inchoate field of study. These initial arguments set the stage for studying the various phenomena related to internationalization and EOL in China: 1) Internationalization is generally considered desirable for developing a country's economic growth. China, a major developing country, has been dedicated to encouraging manufacturers to export products and attracting foreign investment through various public policies including significant subsidies since its ‘open door’ policy of 1979. However, such internationalization has also brought relatively unanticipated amounts of environmental damage as well as resource and energy scarcity issues. 2) International ‘green barriers’ to product export outflow, in addition to increasing environmental issues and resource scarcity, have awakened the Chinese government and manufacturers to fully realize the importance of environmental protection and the need for resource and energy conservation in industrial activities. 3) A possible related phenomenon is EOL's capabilities in reducing environmental harm caused by growing industrial activities due to internationalization and thus balancing economic development with environmental preservation. 4) An alternative phenomenon that can be investigated is whether increased product export and foreign manufacturers operating in China are sources for environmental and energy concerns. That is whether a ‘race-to-the-bottom’ mentality is associated with this trend of internationalization in China. Based on the above-identified phenomena, we feel an urgent need to examine the relationship between internationalization and EOL through international and domestic environmentalism pressures to ease the ecological modernization concerns (balance and improve economic and environmental performance in industrial development). To achieve this research goal, we introduce some background of the internationalization and environmentalism evolution in China in Section 2. A conceptual model and theoretic development with three propositions related to the described phenomena are presented in Section 3. Data collection and basic statistical analysis methodology descriptions are introduced in Section 4 followed by results and discussions in Section 5. At the end of this paper, we summarize with conclusions provided in Section 6.