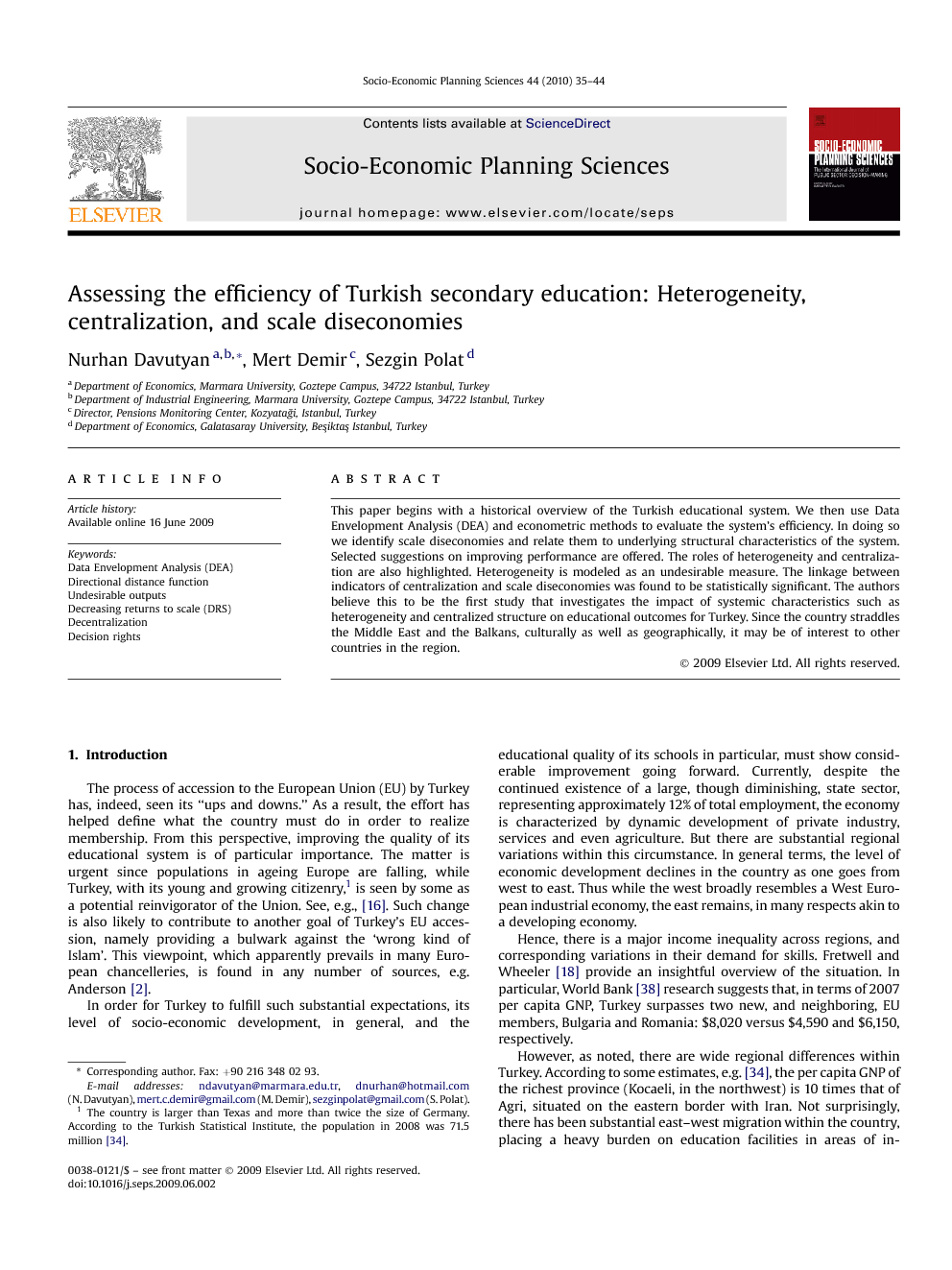 This paper begins with a historical overview of the Turkish educational system. We then use Data Envelopment Analysis (DEA) and econometric methods to evaluate the system's efficiency. In doing so we identify scale diseconomies and relate them to underlying structural characteristics of the system. Selected suggestions on improving performance are offered. The roles of heterogeneity and centralization are also highlighted. Heterogeneity is modeled as an undesirable measure. The linkage between indicators of centralization and scale diseconomies was found to be statistically significant. The authors believe this to be the first study that investigates the impact of systemic characteristics such as heterogeneity and centralized structure on educational outcomes for Turkey. Since the country straddles the Middle East and the Balkans, culturally as well as geographically, it may be of interest to other countries in the region.

The process of accession to the European Union (EU) by Turkey has, indeed, seen its “ups and downs.” As a result, the effort has helped define what the country must do in order to realize membership. From this perspective, improving the quality of its educational system is of particular importance. The matter is urgent since populations in ageing Europe are falling, while Turkey, with its young and growing citizenry,1 is seen by some as a potential reinvigorator of the Union. See, e.g., [16]. Such change is also likely to contribute to another goal of Turkey's EU accession, namely providing a bulwark against the ‘wrong kind of Islam’. This viewpoint, which apparently prevails in many European chancelleries, is found in any number of sources, e.g. Anderson [2]. In order for Turkey to fulfill such substantial expectations, its level of socio-economic development, in general, and the educational quality of its schools in particular, must show considerable improvement going forward. Currently, despite the continued existence of a large, though diminishing, state sector, representing approximately 12% of total employment, the economy is characterized by dynamic development of private industry, services and even agriculture. But there are substantial regional variations within this circumstance. In general terms, the level of economic development declines in the country as one goes from west to east. Thus while the west broadly resembles a West European industrial economy, the east remains, in many respects akin to a developing economy. Hence, there is a major income inequality across regions, and corresponding variations in their demand for skills. Fretwell and Wheeler [18] provide an insightful overview of the situation. In particular, World Bank [38] research suggests that, in terms of 2007 per capita GNP, Turkey surpasses two new, and neighboring, EU members, Bulgaria and Romania: $8,020 versus $4,590 and $6,150, respectively. However, as noted, there are wide regional differences within Turkey. According to some estimates, e.g. [34], the per capita GNP of the richest province (Kocaeli, in the northwest) is 10 times that of Agri, situated on the eastern border with Iran. Not surprisingly, there has been substantial east–west migration within the country, placing a heavy burden on education facilities in areas of in-migration. Indeed, of the country's 81 provinces, Istanbul, a sprawling metropolis, and Turkey's major pole of attraction, has the highest within-province Gini coefficient of 0.43.2 For purposes of perspective, a national map of Turkey (showing all provinces) is given in Fig. 1.Despite the noted regional variations in income and levels of development, the system of government and administration is highly centralized and generally “top-down” in character, [17, p. 5]. Such structural qualities help ensure the universal provision of educational services across the country. Indeed, such uniformity is seen as essential for an effective nation-building effort [32] and [36]. On the other hand, in a large country of diverse environments and levels of development, it is generally more difficult to ensure that local needs are adequately addressed when a centralized command is in place. Moreover, in periods of rapid economic development, or decline, such an administration often cannot react sufficiently quickly to changing priorities. For instance, as will be argued in Section 2.1, although the national trend is towards mixed high schools, the Ministry of National Education (MONE) still has separate directorates for the two genders. The remainder of this paper is organized as follows. Section 2 provides a historical overview of Turkish secondary education and its salient features. In Section 3, after briefly reviewing the relevant DEA literature, we outline the testing methodology used here, to investigate key implications of Turkey's “top-down” organizational structure. The details of our DEA model, the inefficiency estimates it generates, and test results that appear to link said estimates to the form of governmental structure in the country, are presented in Section 4. The final section is devoted to conclusions drawn from the study.

In this paper, we assessed the Turkish secondary education system's ability to prepare its graduates for higher education. In developing our model, we employed the testing procedures devised in [6], and evaluated the plausibility of our variable selection process. Further, we accounted for the significant variation in educational outcomes in Turkey. This was accomplished by modeling the standard deviations of university entrance exam scores as undesirable outputs. In calculating the scale inefficiency scores, we applied both the Seiford and Zhu [28] approach and the directional distance method of Fare and Grosskopf [17]. The desirable outputs were represented by the number of students from each province, as well as the average exam scores they achieved. The direct educational input measures were number of teachers and classrooms. The quality of incoming lycee students was accounted for using their scores on a nationwide high school entry exam. This allowed us to estimate the “knowledge value added” attributable to the secondary education received. We treated each province as a decision making unit and obtained VRS, CRS and scale efficiency scores for each. In addition, we calculated two measures of RTS: the typical measure, ∑λi, using Seiford and Zhu's [28] two-step procedure, and the RTS Stability Region bounds obtained via the method outlined in [29]. We also employed the RTS tests of Banker and Natarajan [6]. The results offered strong evidence that, with but one marginal exception, decreasing returns to scale prevailed in every CRS-inefficient province. A subsequent argument suggested that such inefficiency is related to MONE's needlessly complex structure. In this regard, we showed that when schools enjoy some level of “accidental autonomy,” matters are likely to improve. In light of these findings, and invoking support from economic and management theory, we argue that calls for the devolution of authority and responsibility towards local/regional bodies made by The World Bank [37, p. 68] and OECD [23, p. 88] merit serious consideration. In particular, the evidence presented in Table 7 indicates that such devolution could decrease waste, thereby contributing to a more effective secondary education system in Turkey. Such findings suggest clearly similar possibilities exist in other nations with highly centralized educational establishments. This study used province level data in aggregating across all lycees irrespective of category, size, etc. Such an approach allows for focusing on systemic features –e.g. scale diseconomies – but at the expense of a more nuanced analysis. For instance, how efficiency varies by high school type or admission policy could provide valuable information enabling a more focused policy intervention. Such enquiry will soon be possible since MONE is about to complete its switch to a fully electronic record-keeping system. All variables used in our DEA analysis will then be available for each individual lycee. Although one can expect the administrative and financial hurdles involved in obtaining such data to be considerable, they are not insurmountable. We believe that supplementing the present study with such detailed analysis would be very beneficial to the Turkish educational system and, more importantly, to its students.