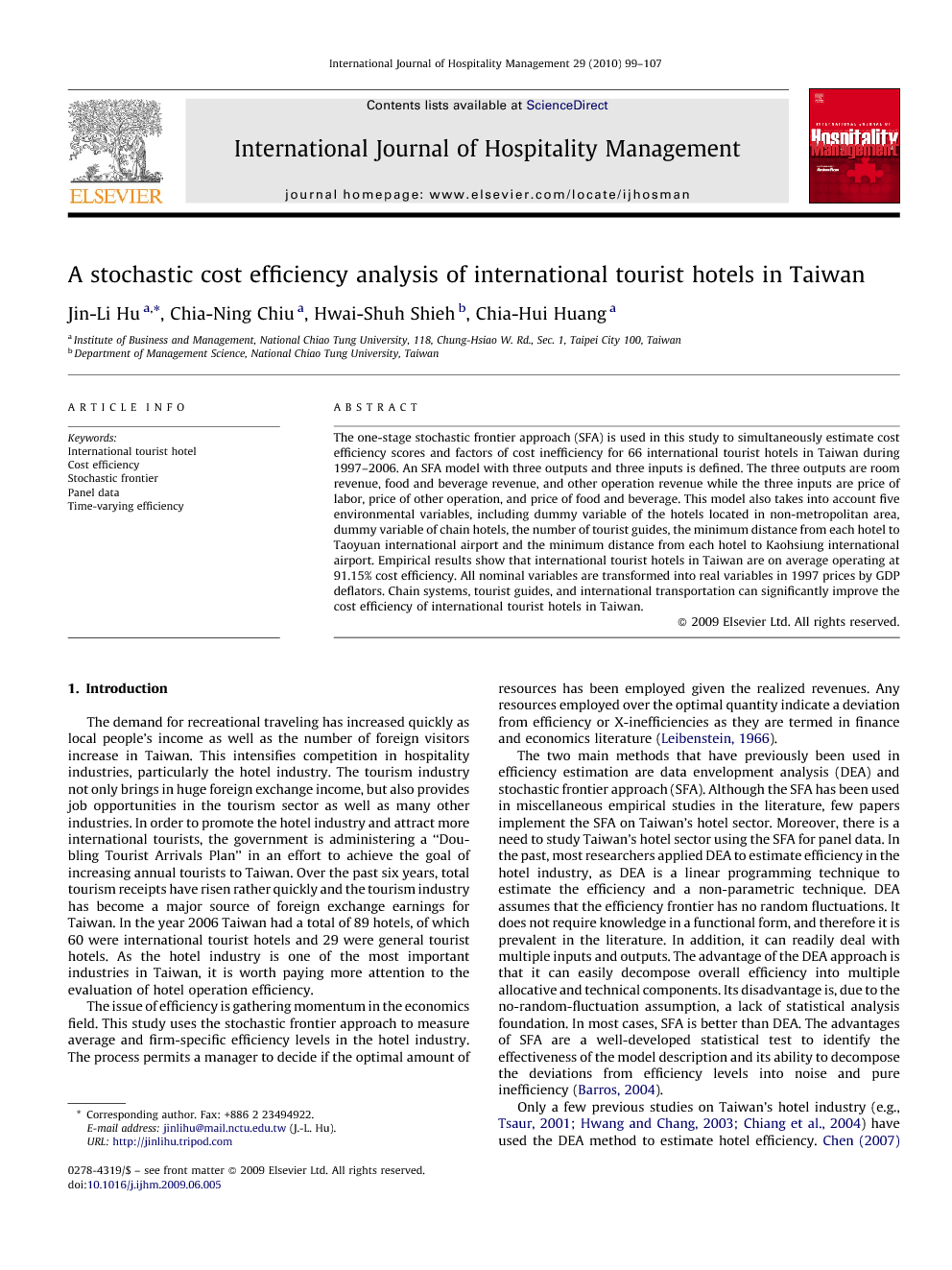 The one-stage stochastic frontier approach (SFA) is used in this study to simultaneously estimate cost efficiency scores and factors of cost inefficiency for 66 international tourist hotels in Taiwan during 1997–2006. An SFA model with three outputs and three inputs is defined. The three outputs are room revenue, food and beverage revenue, and other operation revenue while the three inputs are price of labor, price of other operation, and price of food and beverage. This model also takes into account five environmental variables, including dummy variable of the hotels located in non-metropolitan area, dummy variable of chain hotels, the number of tourist guides, the minimum distance from each hotel to Taoyuan international airport and the minimum distance from each hotel to Kaohsiung international airport. Empirical results show that international tourist hotels in Taiwan are on average operating at 91.15% cost efficiency. All nominal variables are transformed into real variables in 1997 prices by GDP deflators. Chain systems, tourist guides, and international transportation can significantly improve the cost efficiency of international tourist hotels in Taiwan.

The demand for recreational traveling has increased quickly as local people's income as well as the number of foreign visitors increase in Taiwan. This intensifies competition in hospitality industries, particularly the hotel industry. The tourism industry not only brings in huge foreign exchange income, but also provides job opportunities in the tourism sector as well as many other industries. In order to promote the hotel industry and attract more international tourists, the government is administering a “Doubling Tourist Arrivals Plan” in an effort to achieve the goal of increasing annual tourists to Taiwan. Over the past six years, total tourism receipts have risen rather quickly and the tourism industry has become a major source of foreign exchange earnings for Taiwan. In the year 2006 Taiwan had a total of 89 hotels, of which 60 were international tourist hotels and 29 were general tourist hotels. As the hotel industry is one of the most important industries in Taiwan, it is worth paying more attention to the evaluation of hotel operation efficiency. The issue of efficiency is gathering momentum in the economics field. This study uses the stochastic frontier approach to measure average and firm-specific efficiency levels in the hotel industry. The process permits a manager to decide if the optimal amount of resources has been employed given the realized revenues. Any resources employed over the optimal quantity indicate a deviation from efficiency or X-inefficiencies as they are termed in finance and economics literature (Leibenstein, 1966). The two main methods that have previously been used in efficiency estimation are data envelopment analysis (DEA) and stochastic frontier approach (SFA). Although the SFA has been used in miscellaneous empirical studies in the literature, few papers implement the SFA on Taiwan's hotel sector. Moreover, there is a need to study Taiwan's hotel sector using the SFA for panel data. In the past, most researchers applied DEA to estimate efficiency in the hotel industry, as DEA is a linear programming technique to estimate the efficiency and a non-parametric technique. DEA assumes that the efficiency frontier has no random fluctuations. It does not require knowledge in a functional form, and therefore it is prevalent in the literature. In addition, it can readily deal with multiple inputs and outputs. The advantage of the DEA approach is that it can easily decompose overall efficiency into multiple allocative and technical components. Its disadvantage is, due to the no-random-fluctuation assumption, a lack of statistical analysis foundation. In most cases, SFA is better than DEA. The advantages of SFA are a well-developed statistical test to identify the effectiveness of the model description and its ability to decompose the deviations from efficiency levels into noise and pure inefficiency (Barros, 2004). Only a few previous studies on Taiwan's hotel industry (e.g., Tsaur, 2001, Hwang and Chang, 2003 and Chiang et al., 2004) have used the DEA method to estimate hotel efficiency. Chen (2007) took the stochastic frontier approach to analyze data from a single year. This study tries to adopt the panel data, stochastic frontier approach, in order to estimate and analyze the efficiency of Taiwan's international tourist hotels. According to the latest UNWTO World Tourism Barometer (2008), there were approximately 898 million international tourist arrivals globally in 2006 and the number grew by 6% in 2007. The World Tourism Organization (UNWTO, 2008) reported 52 million more international arrivals than in 2006, and of the overall number, Europe received some 19 million and Asia and the Pacific took 17 million. The Americas were up by around 6 million, Africa by 3 million and the Middle East by 5 million. All the different regions registered increases above their long-term average, with the Middle East leading the regional growth ranking (+13%), followed by Asia and the Pacific (+10%), Africa (+8%), the Americas (+5%), and Europe (+4%). In Taiwan, the number of foreign visitors has also been increasing continuously. Therefore, the tourism industry has been one of the most important sources of foreign exchange earnings for Taiwan. In fact, since the tourism industry is a non-smokestack industry, it is deemed environmentally significant and important by countries all over the world. The tourism industry is also considered as one of the star industries of the 21st century since it brings along such great benefits as creating jobs and increasing foreign exchange earnings. The World Travel and Tourism Council (WTTC) reports that over the next ten years the global tourism industry will enjoy a rise in tourism expenditure from US$ 4.21 trillion to US$ 8.61 trillion, an expansion of its share of global GDP (Gross Domestic Product) from 3.6% to 3.8%, and an increase in job opportunities, from 198 million to 250 million positions added. Therefore, this indicates that the tourism industry will play an important role in future global economic development. According to the 2006 annual report on tourism, published by the Taiwan Tourism Bureau, there are 89 tourist hotels in Taiwan, with a total of 21,095 suites and rooms. They can be classified into two groups: international-class tourist hotels and domestic, regular hotels. Of the total number of tourist hotels, 60 are international-class tourist hotels with a total of 17,830 rooms and 29 are regular hotels with 3265 rooms. These hotels employ a total of 19,667 persons. Because of its unique traits in geographic environment, Taiwan possesses plentiful and diverse cultural and natural resources. Therefore, it has great potential for the development of tourism. In order to achieve the annual visitor goals of the Doubling Tourist Arrivals Plan, Taiwan's government is targeting to double the number of international tourist arrivals, to improve the tourism environment, and to reach the international standards. The government not only wants to attract more foreign tourists, but also to allow people to enjoy their holidays in Taiwan (Fig. 1).