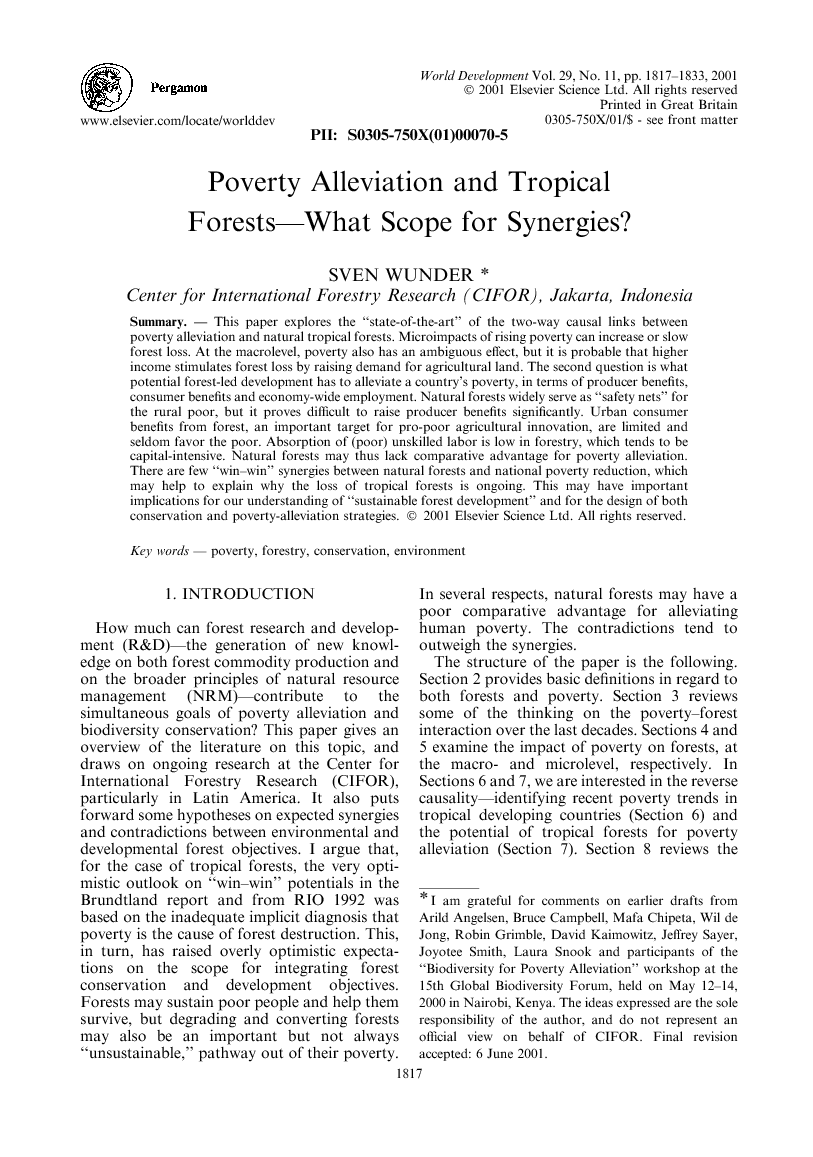 This paper explores the “state-of-the-art” of the two-way causal links between poverty alleviation and natural tropical forests. Microimpacts of rising poverty can increase or slow forest loss. At the macrolevel, poverty also has an ambiguous effect, but it is probable that higher income stimulates forest loss by raising demand for agricultural land. The second question is what potential forest-led development has to alleviate a country's poverty, in terms of producer benefits, consumer benefits and economy-wide employment. Natural forests widely serve as “safety nets” for the rural poor, but it proves difficult to raise producer benefits significantly. Urban consumer benefits from forest, an important target for pro-poor agricultural innovation, are limited and seldom favor the poor. Absorption of (poor) unskilled labor is low in forestry, which tends to be capital-intensive. Natural forests may thus lack comparative advantage for poverty alleviation. There are few “win–win” synergies between natural forests and national poverty reduction, which may help to explain why the loss of tropical forests is ongoing. This may have important implications for our understanding of “sustainable forest development” and for the design of both conservation and poverty-alleviation strategies.

How much can forest research and development (R&D)—the generation of new knowledge on both forest commodity production and on the broader principles of natural resource management (NRM)—contribute to the simultaneous goals of poverty alleviation and biodiversity conservation? This paper gives an overview of the literature on this topic, and draws on ongoing research at the Center for International Forestry Research (CIFOR), particularly in Latin America. It also puts forward some hypotheses on expected synergies and contradictions between environmental and developmental forest objectives. I argue that, for the case of tropical forests, the very optimistic outlook on “win–win” potentials in the Brundtland report and from RIO 1992 was based on the inadequate implicit diagnosis that poverty is the cause of forest destruction. This, in turn, has raised overly optimistic expectations on the scope for integrating forest conservation and development objectives. Forests may sustain poor people and help them survive, but degrading and converting forests may also be an important but not always “unsustainable,” pathway out of their poverty. In several respects, natural forests may have a poor comparative advantage for alleviating human poverty. The contradictions tend to outweigh the synergies. The structure of the paper is the following. Section 2 provides basic definitions in regard to both forests and poverty. Section 3 reviews some of the thinking on the poverty–forest interaction over the last decades. 4 and 5 examine the impact of poverty on forests, at the macro- and microlevel, respectively. In 6 and 7, we are interested in the reverse causality—identifying recent poverty trends in tropical developing countries (Section 6) and the potential of tropical forests for poverty alleviation (Section 7). Section 8 reviews the main arguments of this paper, while Section 9 looks at main policy lessons for both conservation and poverty-alleviation strategies.