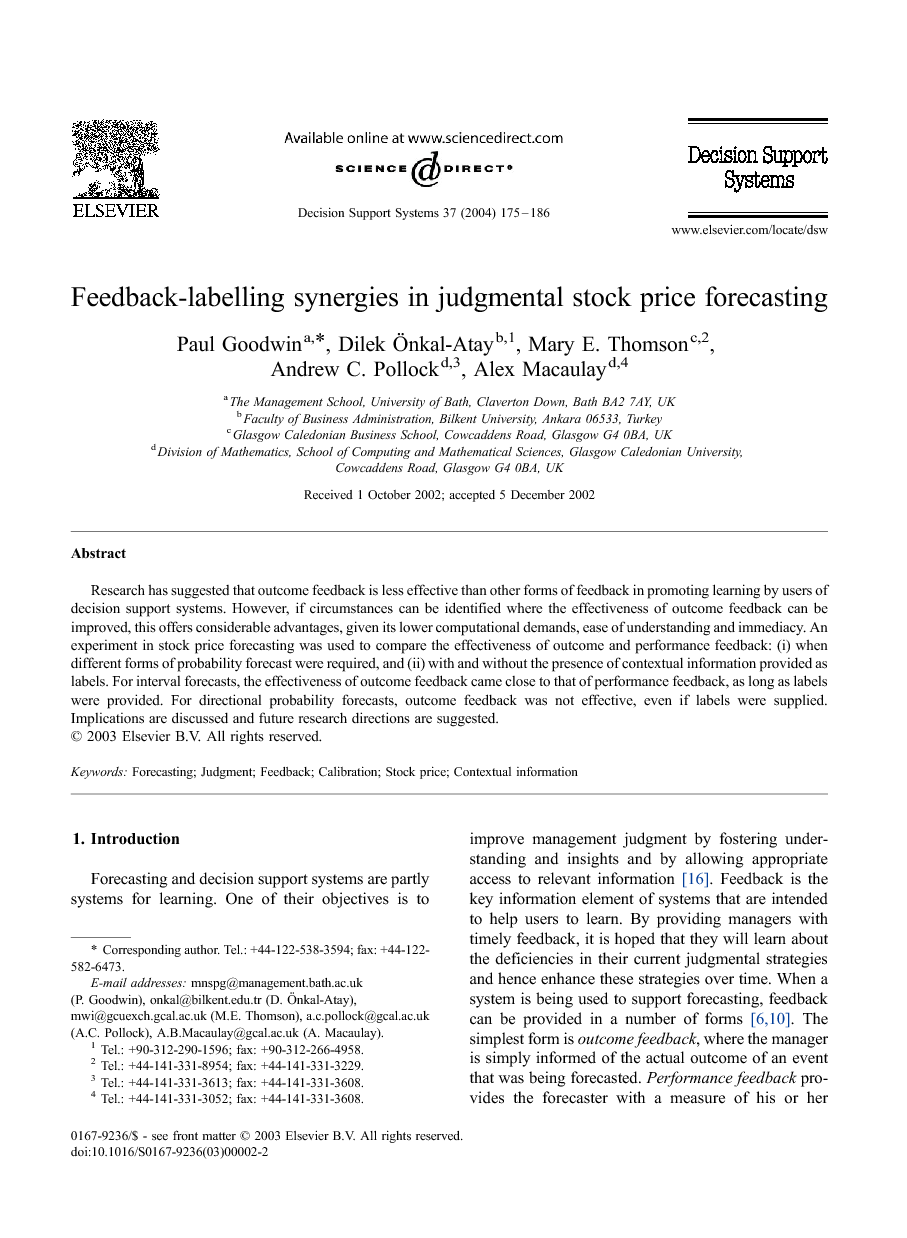 Forecasting and decision support systems are partly systems for learning. One of their objectives is to improve management judgment by fostering understanding and insights and by allowing appropriate access to relevant information [16]. Feedback is the key information element of systems that are intended to help users to learn. By providing managers with timely feedback, it is hoped that they will learn about the deficiencies in their current judgmental strategies and hence enhance these strategies over time. When a system is being used to support forecasting, feedback can be provided in a number of forms [6] and [10]. The simplest form is outcome feedback, where the manager is simply informed of the actual outcome of an event that was being forecasted. Performance feedback provides the forecaster with a measure of his or her forecasting accuracy or bias. Process feedback involves the estimation of a model of the forecaster's judgmental strategy. By feeding this model back to the forecaster, it is hoped that insights will be gained into possible ways of improving this strategy. Finally, task properties feedback delivers statistical information on the forecasting task (e.g. it may provide statistical measures of trends or correlations between the forecast variable and independent variables). Most of the research literature on management judgment under uncertainty suggests that outcome feedback is less effective than other forms in promoting learning (e.g. [6] and [33]). For example, much research into the accuracy of judgmental forecasts has found that forecasters tend to focus too much on the latest observation (e.g. the latest stock value) which will inevitably contain noise. The result is that they see evidence of new, but false, systematic patterns in the latest observation [31] and overreact to it. Because outcome feedback draws attention to the latest observation it exacerbates this tendency. This means that a long series of trials may be needed to distinguish between the systematic and random elements of the information received by the forecaster [31].5 In contrast, by averaging results over more than one period (or over more than one series if cross-sectional data is being used), other forms of feedback are likely to reduce the attention that is paid to the most recent observation and to filter out the noise from the feedback. For example, performance feedback may be presented in the form of the mean forecast error, or in the case of categorical forecasts, the percentage of forecasts that were correct. However, if conditions could be found where outcome feedback does encourage learning as efficiently (or nearly as efficiently) as other forms of feedback, then this would yield considerable benefits to users and designers of support systems. This is because outcome feedback overcomes, or at least reduces, various shortcomings of the other forms. Firstly, outcome feedback is easier to provide and is likely to be more easily understood by the forecaster. Conversely, the provision of performance feedback, for instance, can involve difficult choices on which performance measure to provide—each measure will only relate to one aspect of performance, but providing several measures may confuse the forecaster. Moreover, some measures may be difficult to comprehend and will therefore require that the forecaster is trained in their use. Process feedback will require the identification of cues that the forecaster is assumed to be using, with no guarantee that these cues have really been used. Also, multicollinearity in these cues means that there will be large standard errors associated with the estimates of the weights that the forecaster is attaching to the cues. Task properties feedback requires regular statistical patterns in past data. By definition, these characteristics are often absent in tasks where management judgment is preferred to statistical methods. Secondly, when judgments are being made in relation to a single variable over time, outcome feedback will not be contaminated by old observations when circumstances are changing. Because performance and process feedback are measured over a number of periods, they may lag behind changing performance or changes in the strategies being used by the forecaster. Also, several periods must elapse before a meaningful measure of performance, or a reliable model of the judgmental process, can be obtained. For cross-sectional data, outcome feedback can be provided for each variable and, as such, is not merely an average of potentially different performances (or strategies) on different types of series. Furthermore, a reasonably large number of judgments over different series are required in order to obtain reliable estimates of performance or a reliable estimate of the process model. As we discuss below, there are some indications in the literature of situations that may be favourable to outcome feedback. These relate to (i) the nature of the forecast that is required, and (ii) the type of information that is supplied with the feedback—in particular, whether the past history of the forecast variable is accompanied by an informative label. This paper describes an experiment that was used to investigate the effects of these factors in an important application area: stock price forecasting. Financial forecasting is an area where human judgment is particularly prevalent [8], [35] and [45] and the specific role of judgment in forecasting stock prices has itself received particular attention from the research community (see [7], [21], [26], [32], [33], [34], [41] and [48]). The paper compares the effectiveness of outcome feedback under different conditions with that of performance feedback. Performance feedback was used as the benchmark because, of the other feedback types, it is likely to be the most relevant to financial forecasting and most acceptable to forecasters. The paper is structured as follows. First, a literature review is used to explain why outcome feedback may be more effective when particular types of forecasts are required and why feedback type and label provision might be expected to have interactive effects. Then details of the experiment are discussed, followed by analysis and discussion. The paper concludes with suggestions for further research.