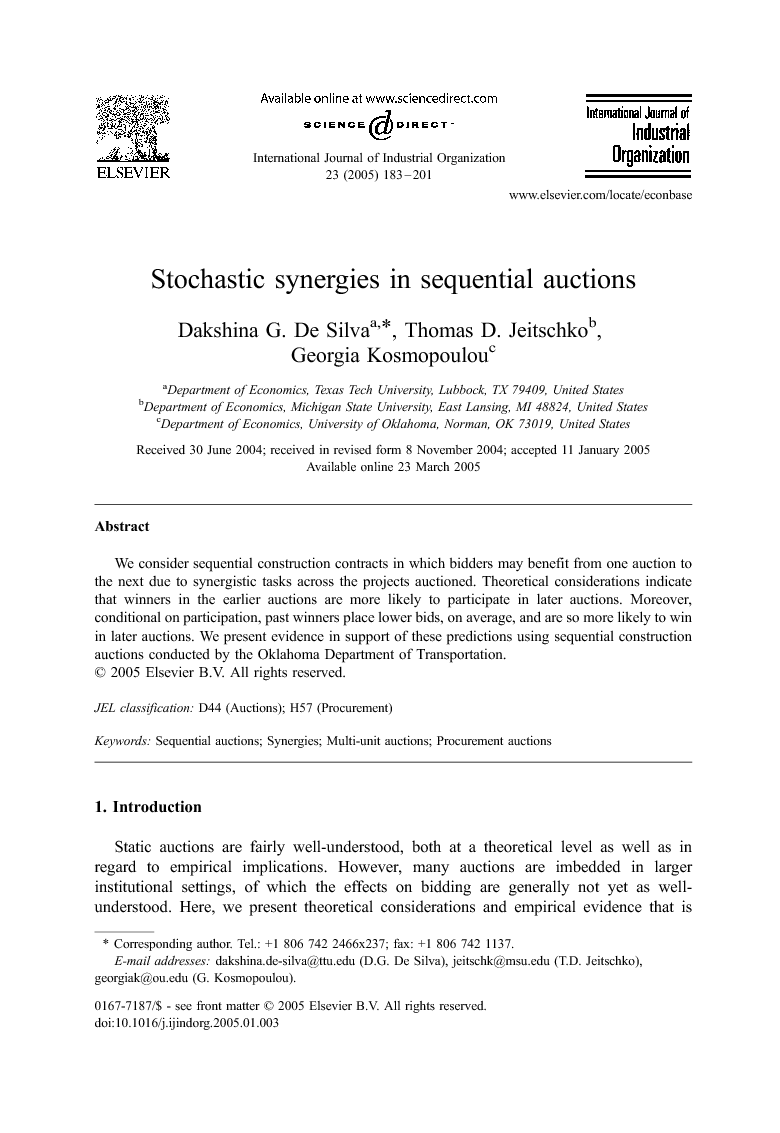 We consider sequential construction contracts in which bidders may benefit from one auction to the next due to synergistic tasks across the projects auctioned. Theoretical considerations indicate that winners in the earlier auctions are more likely to participate in later auctions. Moreover, conditional on participation, past winners place lower bids, on average, and are so more likely to win in later auctions. We present evidence in support of these predictions using sequential construction auctions conducted by the Oklahoma Department of Transportation.

Static auctions are fairly well-understood, both at a theoretical level as well as in regard to empirical implications. However, many auctions are imbedded in larger institutional settings, of which the effects on bidding are generally not yet as well-understood. Here, we present theoretical considerations and empirical evidence that is consistent with these considerations concerning sequential construction contract bidding. In multi-unit procurement auctions firms that win multiple contracts may gain from cost advantages that are present due to synergistic tasks. We investigate the impact of such synergies on bidding behavior in sequential auctions. Theory suggests that in such settings, a firm that wins a contract competes more aggressively for contracts being auctioned subsequently. We provide empirical evidence consistent with the theoretical hypothesis by examining data on sequential construction auctions conducted by the Oklahoma Department of Transportation. Researchers have recently examined the importance of synergies in recurring auctions. McMillan (1994) and Cramton (1997) noted that in these auctions the two main concerns are bidders' extractions of complementarities between goods and the enhancement of efficiency in the distribution of goods. Krishna and Rosenthal (1996) and Branco (1997) show that in sequential second price auctions bidders who bid on multiple objects bid more aggressively than bidders who bid on a single object. Jeitschko and Wolfstetter (2002) examine the bidding behavior in sequential first-price auctions and find that bidders who win an item in the presence of synergies bid more aggressively and win other related items with a higher probability. These results rely on the assumption that in the first auction bidders are as yet unaware of their values for the items in the subsequent auction. However, in many auctions, e.g., government procurement auctions, bidders know all projects that are up for auction in a sequential setting and they also know both their stand-alone values as well as their joint values for these items. We find that, due to positive synergies, winners of the first auction are more likely to participate in the second auction than losers of the first auction are. Furthermore, conditional on bidding in the second auction, winners of the first auction place lower bids in the second auction—thus, increasing their probability of being awarded the contract of the second auction. The uniqueness of our data set allows us to test and validate these theoretical predictions. A number of recent empirical papers have emphasized spatial correlation in bids. Gandal (1997), using Israeli data, shows that winning multiple cable television licenses in neighboring geographic areas enhances the value of owning these licenses. Ausubel et al. (1997), who investigate the existence of cost advantages in broadband personal communication service spectrums (PCS) in ascending-bid auctions in the United States, find that there are geographic synergies associated with winning multiple adjacent spectrum licenses and that those synergies affect bidding. Rusco and Walls (1999) analyze data from the timber industry, and De Silva (2005) considers Oklahoma road construction auctions. Both of these papers find that in recurring auctions there is spatial correlation of bids that induces aggressive bidding. Marshall et al. (2003) use the modeling framework of Krishna and Rosenthal (1996) to show that geographic synergies may account for a large percentage of costs in the distribution of school milk in the state of Georgia. Cantillon and Pesendorfer (2004) consider first price combinatorial auctions and investigate cost synergies in auctions of bus routes in London, suggesting that geographic synergies are accounted for when routes are offered at auction at the same time. The most closely related paper to ours that does not focus on spatial correlation of bids is De Silva et al. (2002). Construction auctions held in two consecutive sessions (a morning and an afternoon session) on one single day every month are studied. The bidding behaviors in the late sessions are compared between those who win and those who lose in early sessions. The paper, thus, considers bidder-time effects using multiple bidders. Our interest is in the effect of synergies upon bidding. Synergies create cost asymmetries among firms that compete for related projects. Supplying services on related contracts may create significant cost advantages: a firm can share resources on both projects effectively, it can avoid duplication of setup costs and it can acquire valuable expertise in the process. On the other hand, a firm that wins multiple contracts commits resources for the duration of each contract that may increase its cost on the margin. With that in mind, it is important to understand the bidding pattern within a firm when it has the potential to gain from winning two related projects and when it doesn't. We focus on differences in the bidding patterns for each firm when it wins in the morning, and when it either loses in the morning, or bids only in one session. Thus, we examine bidder-specific effects. In Section 2, some theoretical background is given that is based on a brief sketch of cost synergies in sequential auctions that is found in Appendix A. This is used to formulate the relevant hypotheses. In Section 3, the data is described. Section 4 contains the results of the empirical analysis and in Section 5, the main findings of the study are summarized.

We consider sequential construction contracts in which bidders may benefit from one auction to the next due to synergistic tasks across the projects that are auctioned off. Theoretical considerations indicate that winners in the former auctions may experience synergies and are then more likely to participate in latter auctions. Due to synergies, latter auctions have asymmetric distributions of valuations across winners and non-winners of the earlier auctions. As a result, the theory suggests that conditional on participation in the latter auction, previous winners' bids are stochastically dominated by those of other bidders in a first order sense. Hence, previous winners–who benefit from synergies–are more likely to win in latter auctions. We present strong evidence in support of these predictions using sequential construction auctions conducted by the Oklahoma Department of Transportation. In particular, we examine bidding patterns of individual firms across auctions conducted on the same day, and discern clear differences conditional upon potential synergies between the auctions, by accounting for bidder fixed effects. Winners of early auctions are more likely to participate in later auctions. The general distribution of bids placed by past winners is dominated by those placed by other bidders in the sense of first order stochastic dominance. Hence, previous winners are more likely to win later auctions.