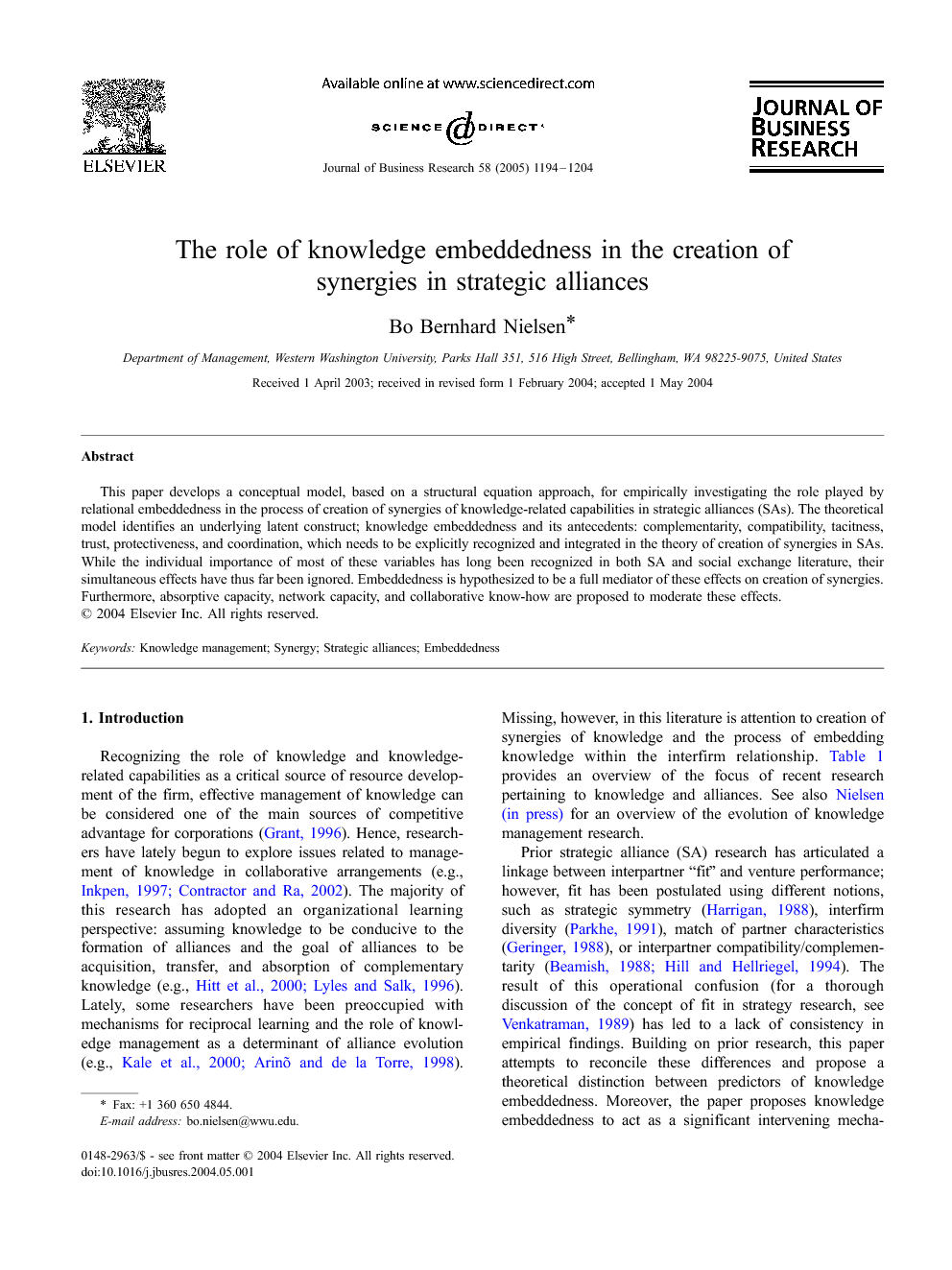 This paper develops a conceptual model, based on a structural equation approach, for empirically investigating the role played by relational embeddedness in the process of creation of synergies of knowledge-related capabilities in strategic alliances (SAs). The theoretical model identifies an underlying latent construct; knowledge embeddedness and its antecedents: complementarity, compatibility, tacitness, trust, protectiveness, and coordination, which needs to be explicitly recognized and integrated in the theory of creation of synergies in SAs. While the individual importance of most of these variables has long been recognized in both SA and social exchange literature, their simultaneous effects have thus far been ignored. Embeddedness is hypothesized to be a full mediator of these effects on creation of synergies. Furthermore, absorptive capacity, network capacity, and collaborative know-how are proposed to moderate these effects.

Recognizing the role of knowledge and knowledge-related capabilities as a critical source of resource development of the firm, effective management of knowledge can be considered one of the main sources of competitive advantage for corporations (Grant, 1996). Hence, researchers have lately begun to explore issues related to management of knowledge in collaborative arrangements (e.g., Inkpen, 1997 and Contractor and Ra, 2002). The majority of this research has adopted an organizational learning perspective: assuming knowledge to be conducive to the formation of alliances and the goal of alliances to be acquisition, transfer, and absorption of complementary knowledge (e.g., Hitt et al., 2000 and Lyles and Salk, 1996). Lately, some researchers have been preoccupied with mechanisms for reciprocal learning and the role of knowledge management as a determinant of alliance evolution (e.g., Kale et al., 2000 and Arinõ and de la Torre, 1998). Missing, however, in this literature is attention to creation of synergies of knowledge and the process of embedding knowledge within the interfirm relationship. Table 1 provides an overview of the focus of recent research pertaining to knowledge and alliances. See also Nielsen (in press) for an overview of the evolution of knowledge management research. Prior strategic alliance (SA) research has articulated a linkage between interpartner “fit” and venture performance; however, fit has been postulated using different notions, such as strategic symmetry (Harrigan, 1988), interfirm diversity (Parkhe, 1991), match of partner characteristics (Geringer, 1988), or interpartner compatibility/complementarity (Beamish, 1988 and Hill and Hellriegel, 1994). The result of this operational confusion (for a thorough discussion of the concept of fit in strategy research, see Venkatraman, 1989) has led to a lack of consistency in empirical findings. Building on prior research, this paper attempts to reconcile these differences and propose a theoretical distinction between predictors of knowledge embeddedness. Moreover, the paper proposes knowledge embeddedness to act as a significant intervening mechanism (a mediator) between antecedent variables and the consequent variable (synergy). Knowledge embeddedness is central to the study of SAs because it serves as an important building block for the theory construction and helps operationalize the concept of fit. From a normative perspective, understanding antecedent variables is the most important alliance learning issue. Managers interested in exploiting learning opportunities need to be aware of the difficulties associated with collaboration and in particular the interrelationships of several important elements of fit in the pursuit of knowledge creation, synergies, and innovation. Hence, this paper introduces a conceptual model, based on a structural equation approach, for empirically investigating the role played by dyadic knowledge embeddedness in the process of creation of synergies of knowledge-related capabilities in SAs. Based on the theoretical model, a series of testable propositions are derived and the paper concludes with a discussion of contribution to theory development and future research directions.