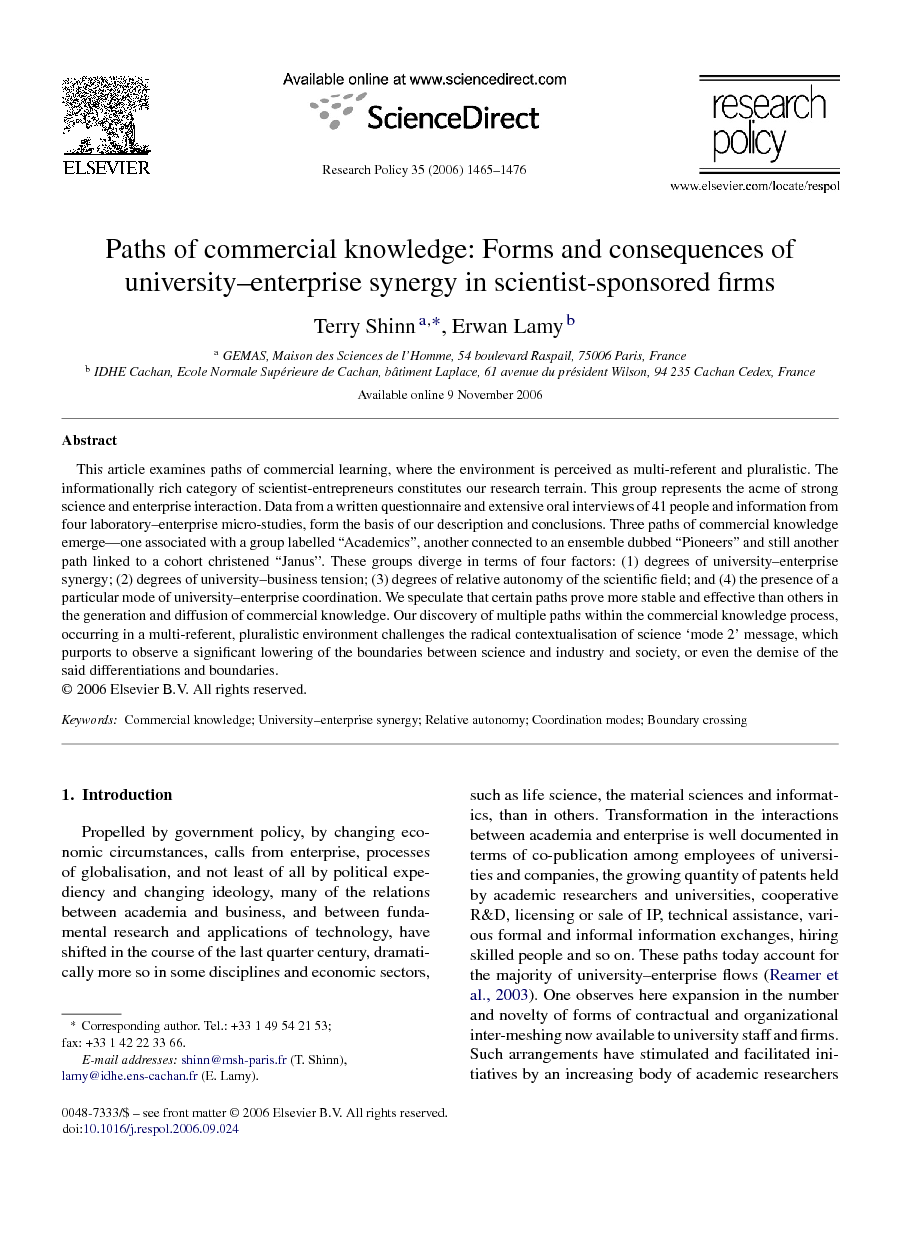 This article examines paths of commercial learning, where the environment is perceived as multi-referent and pluralistic. The informationally rich category of scientist-entrepreneurs constitutes our research terrain. This group represents the acme of strong science and enterprise interaction. Data from a written questionnaire and extensive oral interviews of 41 people and information from four laboratory–enterprise micro-studies, form the basis of our description and conclusions. Three paths of commercial knowledge emerge—one associated with a group labelled “Academics”, another connected to an ensemble dubbed “Pioneers” and still another path linked to a cohort christened “Janus”. These groups diverge in terms of four factors: (1) degrees of university–enterprise synergy; (2) degrees of university–business tension; (3) degrees of relative autonomy of the scientific field; and (4) the presence of a particular mode of university–enterprise coordination. We speculate that certain paths prove more stable and effective than others in the generation and diffusion of commercial knowledge. Our discovery of multiple paths within the commercial knowledge process, occurring in a multi-referent, pluralistic environment challenges the radical contextualisation of science ‘mode 2’ message, which purports to observe a significant lowering of the boundaries between science and industry and society, or even the demise of the said differentiations and boundaries.

Propelled by government policy, by changing economic circumstances, calls from enterprise, processes of globalisation, and not least of all by political expediency and changing ideology, many of the relations between academia and business, and between fundamental research and applications of technology, have shifted in the course of the last quarter century, dramatically more so in some disciplines and economic sectors, such as life science, the material sciences and informatics, than in others. Transformation in the interactions between academia and enterprise is well documented in terms of co-publication among employees of universities and companies, the growing quantity of patents held by academic researchers and universities, cooperative R&D, licensing or sale of IP, technical assistance, various formal and informal information exchanges, hiring skilled people and so on. These paths today account for the majority of university–enterprise flows (Reamer et al., 2003). One observes here expansion in the number and novelty of forms of contractual and organizational inter-meshing now available to university staff and firms. Such arrangements have stimulated and facilitated initiatives by an increasing body of academic researchers engaged in fundamental research to step forward and set up their own enterprise, while simultaneously retaining their university position. The reality of movement among academic scientists toward commercial knowledge is thus today beyond refutation (Etzkowitz and Leydesdorff, 2000, Godin and Gingras, 2000, Krimsky, 2003, Lamy, 2005, Nowotny et al., 2001, Owen-Smith, 2003, Slaughter and Leslie, 1997 and STI Review, 2001). Abundant documentation of evolution favourable to commercial knowledge nevertheless leaves unresolved the crucial twin question of what this transformation specifically entails for the relative changing position of individuals no longer situated solidly inside academia but instead operating in a multi-referent, pluralistic environment; and what it entails for the resulting composition, balance and management of the attendant cognition. In order to explore the internal dynamics and ensuing profiles of scientists generating and applying commercial knowledge, we selected the informationally strategic population of scientists who have established their own firms or have actively participated in such. This paper reports the findings of a 4-year study of 41 individuals and of micro-analyses of four firms. Research focuses on France for the period 1990–2003. The population concerns Centre National de Recherche Scientifique (CNRS) and university personnel, who by virtue of establishing a firm, while at the same time maintaining their academic position, became what is known in France as “chercheur-entrepreneur” or “chercheur créateur d’entreprise”. This study explores how scientists involved in the production and application of commercial knowledge perceive the conjunction of academia and business, and how they cope with the interface between them. The paper sets forth three profiles linked to processes of commercial knowledge, each exhibiting a specific academia-enterprise coordination mode. The group labelled “Academics” exhibits a “strategic” mode (an instrumentalisation of enterprise for scientific objectives). Another category christened “Pioneers” develops an “imitation-based” mode of coordination (the adaptation of scientist to entrepreneurial objectives). A third group dubbed “Janus” evinces a “sequential” coordination mode (an alternating passage between academia and the firm). Each of these modes of coordination accompanies different forms of university–enterprise synergy, and is characterised by different levels of university–enterprise “tension”. The empirical results presented below challenge the extreme Gibbons et al. (1994) and Nowotny et al. (2001) “contextualisation of science” argument, which insists that the boundaries of science are today substantially diminished or have disappeared. Their hypothesis purports that enhanced technological effectiveness and performance of the economy, and betterment of society are contingent on a knowledge system structured around forms of essentially commercial learning, which necessitates atrophy of the boundaries of the university and science to the benefit of enterprise and beyond. However, our detailed empirical evidence points in a different direction. It instead indicates that, even within the framework of accelerated commercial knowledge, boundaries between science and enterprise still stand. The groups termed Janus and Academics sustain these boundaries, and the Pioneers reluctantly tolerate or willingly accept them. The putative pernicious effect of boundary maintenance is seemingly sufficiently mitigated by the mechanism of the various afore-mentioned modes of coordination. There appears to exist an as not yet fully understood highly complex positive correlation between the degree of university–enterprise synergy and degree of academic autonomy. In this study “synergy” refers to reciprocal benefits accruing to different organisational units through mutual interaction, for example between SMI and academic research institutions (Fiset et al., 1999). The sociological concept of autonomy adopted here draws attention to an organisation's strategies, operation and relative positioning on the basis of internal systems of regulation, including goals, rewards, membership and similar self-referencing selection mechanisms (Merton, 1973 [1942]; Freidson, 1994 and Freidson, 2001). Where academic autonomy proves very high, one notes that the synergy between the public sector laboratory and the firm is likewise elevated. It will further be suggested here that certain categories of scientist-entrepreneurs demonstrate greater facility than others in managing the multi-referent, pluralistic environment of the sort connected with the generation and application of commercial knowledge.

Increasing focus on the dynamics of commercial learning is often accompanied by two important corollaries: first, that boundaries between academia and enterprise must diminish or even collapse in order to permit optimal development of commercial learning through transfer of exogenous information, and second, that commercial knowledge must override academic learning. Post-modern thinking calls for an inversion of the alleged traditional hierarchical relations between science and technology-enterprise. This article shows that for working scientists the interactions between the university and enterprise are often highly complex, and that enterprise-interested scientists have developed patterns of behaviour and modes of coordination that often disqualify the extremist and un-nuanced pronouncements of some science-enterprise watchers. There exist multiple paths in the production and application of commercial knowledge. Two of the three pathways explored here demonstrate that a maximum of synergy and minimum of tension between the scientific field and enterprise occurs in a configuration where the relative autonomy of the scientific field is elevated—the case of the cohorts labelled Academic and Janus. The presence of autonomy, and hence the existence of boundaries, does not impede fruitful boundary crossing in the case of these two categories of scientist-entrepreneurs. In the scientific field, autonomy is relative, thereby leaving open possibilities of permeability and boundary crossing. The cohort we dub Pioneers, which most strongly identifies with industry, is least concerned with the scientific field and its autonomy, and it exhibits only modest synergy and acute tension. This group's strong embeddedness in enterprise is accompanied by a self-willed distance from academia, which contrasts with the Janus’ twin, equally assertive attachment to the university and to business, which occurs at successive periods. Janus coordinate segments of time as opposed to forms of practice, and it is due to this sequential mode of coordination that the cohort is the most efficient purveyor of commercial learning in our population. Autonomy and selective intermittent boundary crossing is thus positively correlated with commercial learning, while dismissal of autonomy and consequent indifference to divisions of labour and boundary dynamics correlate negatively with university–business synergy and with on-going, leading-edge production and diffusion of commercial knowledge. Finally, we suggest that the persistence of multiple paths of commercial learning, each connected to a specific mode of science-enterprise coordination, can inform and enrich understanding of the triple helix perspective (Etzkowitz and Leydesdorff, 2000), which emphasizes the co-existence of new cognitive and organisational arrangements and historically set and time-tested erstwhile university and enterprise configurations.