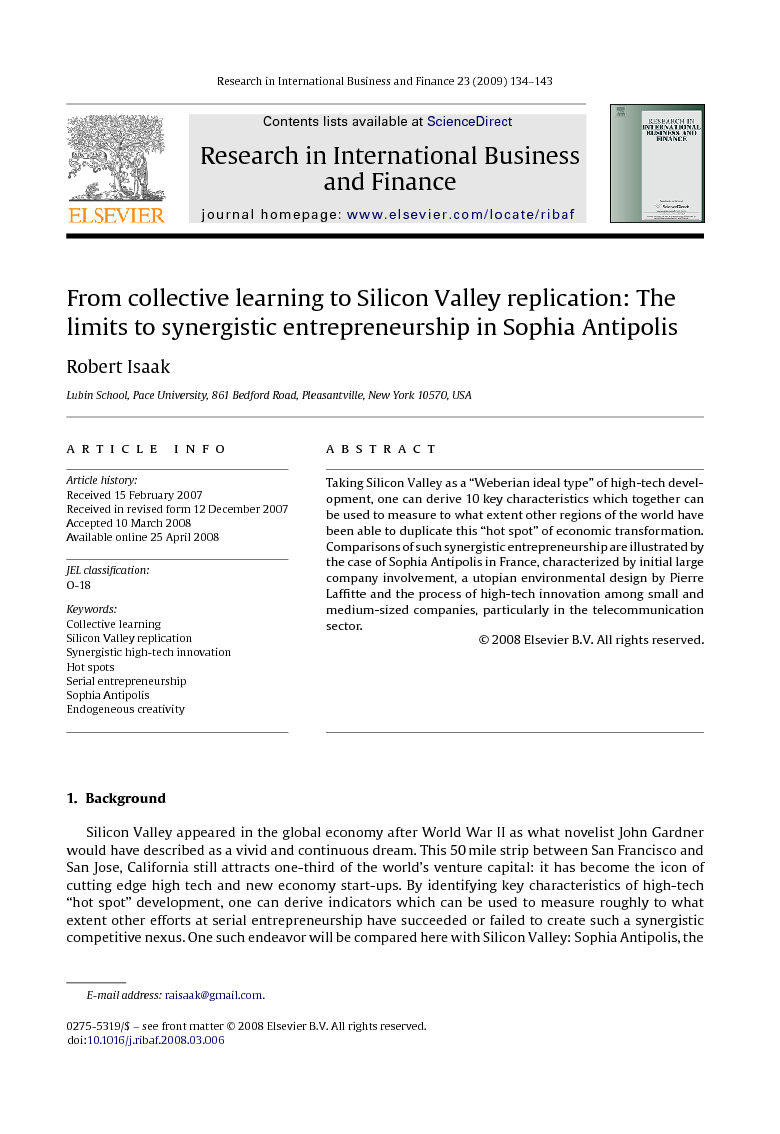 Taking Silicon Valley as a “Weberian ideal type” of high-tech development, one can derive 10 key characteristics which together can be used to measure to what extent other regions of the world have been able to duplicate this “hot spot” of economic transformation. Comparisons of such synergistic entrepreneurship are illustrated by the case of Sophia Antipolis in France, characterized by initial large company involvement, a utopian environmental design by Pierre Laffitte and the process of high-tech innovation among small and medium-sized companies, particularly in the telecommunication sector.

This analysis suggests that the prerequisites to replicate Silicon Valley elsewhere are extremely difficult to match. While globalization has facilitated the process of building up these characteristics given the immediate transfers of technology, information and capital, the concentration of critical factors for success in a sector with the potential to create a global market revolution is not easy to achieve. Bio-technology and nano-technology are candidates for such an evolution, but the odds of obtaining venture capital for breakthroughs in these sectors are not accidentally higher in Silicon Valley than anywhere else. Sophia Antipolis would have a much better chance of becoming such a high-tech “hot spot” if French industrial policy shifted to concentrate resources only upon this one region, rather than diffusing its support for many regional high-tech centers—at least until a technological breakthrough of “first-mover” rank occurred. But the chances of this are slim. The country is politically fragmented, past policies of regional decentralization of IT development are established, and there are increasing demands for redistributing resources and job opportunities more equally throughout the society. The paradox is that the initial break-through of a “first-mover” center can lead to the redistribution of many more opportunities to poor regions through a carefully conceived blueprint. To date, according to David Rosenberg, the most successful effort to mimic the competitive cluster of Silicon Valley is in Hsinchu-Taipei in Taiwan, where development was targeted to be complementary with the valley, rather than to compete with it. For example, Taiwan decided to manufacture semi-conductors which firms in the valley decided to outsource rather than to do themselves (Rosenberg, 2002). However, the perception of decline in political stability and economic predictability in the US and the rise of outsourcing of engineering-entrepreneurial talent promises a redistribution of opportunity if emerging high-tech “hot spots’ can seize the moment, perhaps by cultivating the 10 characteristics detailed here as benchmarks. Rather than resulting as a creation from innovation as was Silicon Valley, Sophia Antipolis was created in order to generate increased innovative activity (Jones, 2005). With patience over time, Sophia appears more on a trajectory to succeed in cultivating the successful diffusion and persistence of effective small and medium-sized firms that has been observed in Italy than the concentration of energy necessary for a Silicon Valley (Dei Ottati, 1991). The fast turn-around in investment necessary to attract venture capital and the absence of a critical mass of venture capital firms near Sophia Antipolis limit the capital flows necessary to stimulate a permanent flow of innovative, high-tech start-ups. This, in turn, reinforces the natural tendency of European entrepreneurs to attempt one brilliant success and then to live off of it, rather than to leap from one start-up to another (e.g. serial entrepreneurship). Furthermore, the deliberate design of Sophia to preserve two-thirds of its territory as an undeveloped “green” zone may have inadvertently reduced the concentrated, informal “funky” meeting places for engineers, academics and venture capitalists to “hang out” together in order to stimulate innovative, collective learning networks. While started from nothing but beautiful green vegetation, Sophia Antipolis can hardly be described as “provisional” although it is clearly still a work in progress. For example, after peaking in 2000, the amount of venture capital invested in firms in Sophia fell significantly in the early part of the century, starting to slowly increase a bit only in 2004 (Bernasconi and Moreau, 2004). From the viewpoint of methodology, future research can further refine the rough “first cut” measurements made possible here through the table indicating exists, partially exists and does not exist to indicate the extent of the existence of key critical characteristics for Silicon Valley replication. For example, each of the 10 characteristics could be broken down into specific collective learning schemata, on the one hand (i.e. status loss vs. risk-taking propensity), or into quantifiable indicators, on the other hand (i.e. the levels and concentration of venture capital in specific sectors). The advantage of the interrelated overview here is that entire regions only become synergistic dynamos if a number of these factors are intensely present simultaneously in order to produce “first mover” products for the global economy: the whole is more than the sum of its parts. Living and working in the regions in which such factors are assessed contribute to being able to use an ethnographic approach, but this method risks the natural bias of the perceptions of the individual researcher (for example, in noting a lack of creative “funkiness” in the environment). Such biases can be mitigated to some extent by anthropological or psycho-therapy training to keep one's personal evaluations in check in participant–observer situations, but they can never be fully eliminated. However, rough charts can be produced from secondary sources and statistics in order to produce a global mapping of IT “hot spots” in much the same way that satellite photos can reveal environmental hot spots. Such global mappings can lead to intriguing further research topics. For example: why are there no IT hot spots of development in Latin America, most of Africa, or the Middle East (other than Israel)? Such “dark continents” in terms of “new economy” development may put these nations decades behind in terms of future prosperity for their younger generations unless effective recipes can be found to start small “Silicon Valley” developments in order to give a path of hope and connection (cf. Isaak, 2005). As was the case in the Industrial Revolution in the 19th century England, the Information Revolution that started in Silicon Valley may require many decades to fully transform societies desiring to absorb its array of economic and technological benefits. Sophia Antipolis embodies one blue-print for how this kind of IT regional development can be started from scratch. And the very limits Sophia has confronted in this evolution are apt to be informative for other attempts to create synergistic collective learning cultures that are located outside the Anglo-American liberal economic tradition—a cultural framework which may be more conducive to fostering serial entrepreneurship in high-risk technologies.