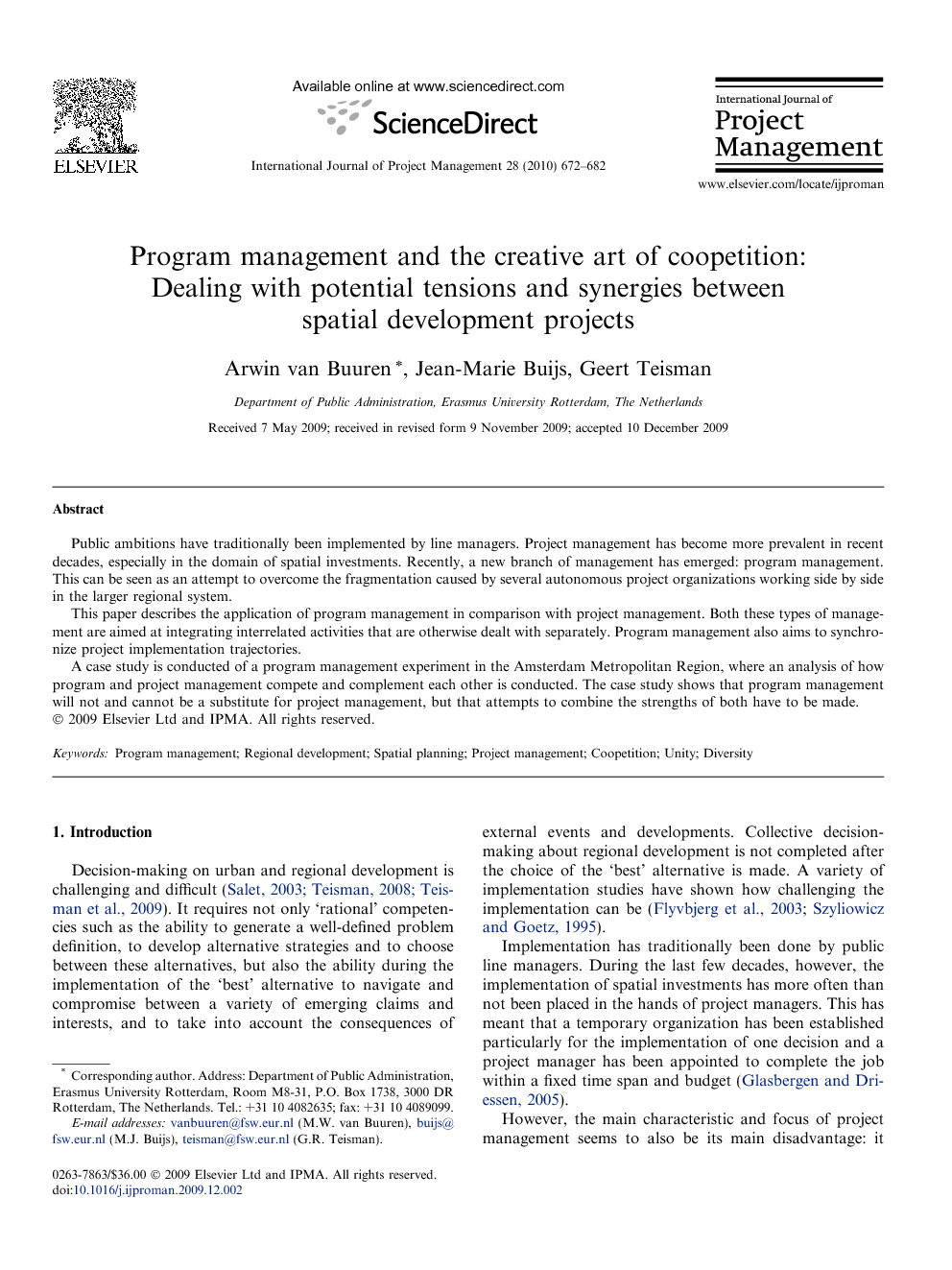 Program management in the context of spatial planning has been applied as a mechanism to achieve coherent and integral regional development. It seeks to achieve a consistence and a shared focus among projects to stimulate spatial synergy. The case study highlighted a program management arrangement which has the ambition to fulfil this function, but which must compete with project arrangements and is ultimately not able to facilitate ‘joint decision-making’ on a national scale about a variety of spatial ambitions in the Amsterdam Metropolitan Region. The pressure from actor coalitions around the various projects on their own ambitions is too strong to enable this program ideal. Our case shows that in spatial planning program management can be easily framed as an additional complicating factor for project managers busy to realize their own objectives. In our case we found several moments and instances of reluctance from project managers against the attempts of the program management to organize integration and cooperation. Especially when these attempts result into time delays, less political attention for the individual project or reduced opportunities to organize the own project, the willingness for cooperation declined. We found out that project managers assume there is only a facilitating and subordinated role for program managers and that program managers should not be in a position to overrule project managers. To say it in a popular way: program managers are reluctantly accepted as long as they do not really interfere with project implementation. In that sense project and program managers seem to compete about the question ‘who is in charge’? In our case the program management is an arrangement without strong formal obligations. It has to rely on the power of persuasion and the development of a sense of mutual benefits to be able to realize a programmatic ambition. The interplay between program management and project management can be characterized as a coopetitive modus of value creation (Nalebuff and Brandenburger, 1996 and Teisman, 2001). Managers seem to share a dual awareness. As a result of interdependency, managers realize that they need cooperation in order to realize their own objectives. In theory, they are in favour of achieving mutual added value. At the same time, they want to focus on realizing their own project/program ambitions. In cases of perceived controversies, competitive strategies are easily applied. This tension between project and program management seems to be inescapable. It could even be argued that a fruitful tension can contribute to the integrated and synchronised development of a complex system, such as a metropolitan region. The two are complementary in their strengths and the delicate balance between programmatic integration and powerful projects provides the necessary ingredients for successful regional development. The project approach is helpful in conducting decisive action on well-defined single-value issues, while the program approach is necessary to realize synergy and coherence. Too much program management can undermine the potential of project management, but the opposite is also true. Further investigation of the strategies that project and program managers alternately or simultaneous use to deal with the tensions between diversity and integration is required in order to shed more light on the coevolution of both management types in the practice of urban and regional planning.