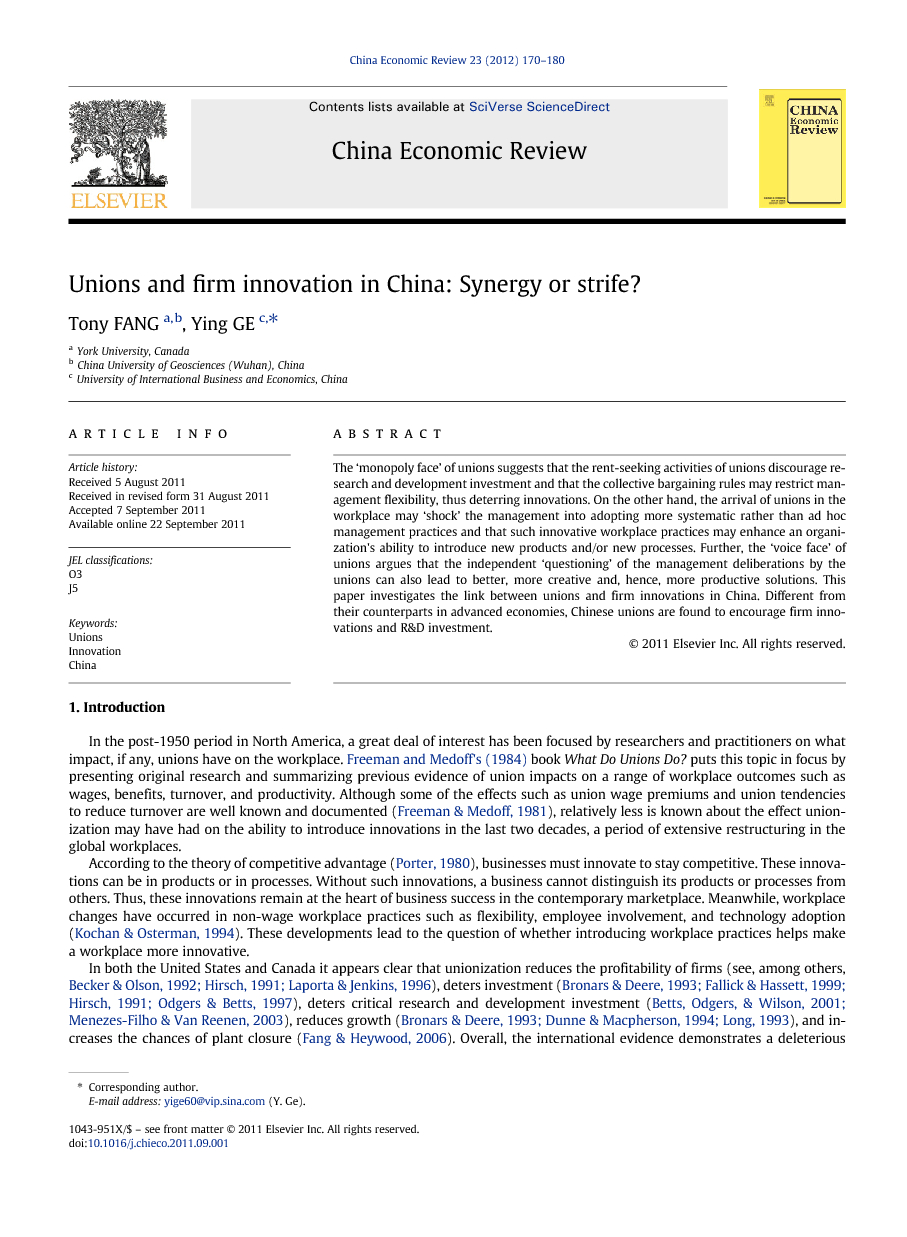 The ‘monopoly face’ of unions suggests that the rent-seeking activities of unions discourage research and development investment and that the collective bargaining rules may restrict management flexibility, thus deterring innovations. On the other hand, the arrival of unions in the workplace may ‘shock’ the management into adopting more systematic rather than ad hoc management practices and that such innovative workplace practices may enhance an organization's ability to introduce new products and/or new processes. Further, the ‘voice face’ of unions argues that the independent ‘questioning’ of the management deliberations by the unions can also lead to better, more creative and, hence, more productive solutions. This paper investigates the link between unions and firm innovations in China. Different from their counterparts in advanced economies, Chinese unions are found to encourage firm innovations and R&D investment.

In the post-1950 period in North America, a great deal of interest has been focused by researchers and practitioners on what impact, if any, unions have on the workplace. Freeman and Medoff's (1984) book What Do Unions Do? puts this topic in focus by presenting original research and summarizing previous evidence of union impacts on a range of workplace outcomes such as wages, benefits, turnover, and productivity. Although some of the effects such as union wage premiums and union tendencies to reduce turnover are well known and documented (Freeman & Medoff, 1981), relatively less is known about the effect unionization may have had on the ability to introduce innovations in the last two decades, a period of extensive restructuring in the global workplaces. According to the theory of competitive advantage (Porter, 1980), businesses must innovate to stay competitive. These innovations can be in products or in processes. Without such innovations, a business cannot distinguish its products or processes from others. Thus, these innovations remain at the heart of business success in the contemporary marketplace. Meanwhile, workplace changes have occurred in non-wage workplace practices such as flexibility, employee involvement, and technology adoption (Kochan & Osterman, 1994). These developments lead to the question of whether introducing workplace practices helps make a workplace more innovative. In both the United States and Canada it appears clear that unionization reduces the profitability of firms (see, among others, Becker and Olson, 1992, Hirsch, 1991 and Laporta and Jenkins, 1996), deters investment (Bronars and Deere, 1993, Fallick and Hasset, 1999, Hirsch, 1991 and Odgers and Betts, 1997), deters critical research and development investment (Betts et al., 2001 and Menezes-Filho and Van Reenen, 2003), reduces growth (Bronars and Deere, 1993, Dunne and Macpherson, 1994 and Long, 1993), and increases the chances of plant closure (Fang & Heywood, 2006). Overall, the international evidence demonstrates a deleterious effect of unionization on research and development (R&D) investment (e.g., Betts et al., 2001, Hirsch, 2004 and Metcalf, 2003). However, most empirical evidence is based on experience in advanced economies. Little is known about the unions in developing economies, which have different features and operate in different economic and social environments. The rest of the paper is organized as follows: Section 2 presents the theoretical considerations and past empirical evidence. Section 3 discusses the unique features of Chinese unions which merit special attention. Section 4 describes the data and estimation strategy. The main empirical results are reported in 5 and 6 concludes the paper.

This study improves our understanding of the link between unions and firm innovation in developing economies. The ‘monopoly face’ of unions suggests that the rent-seeking activities of unions discourage research and development investment and that the collective bargaining rules may restrict management flexibility, thus deterring innovations. The ‘voice face’ of unions, however, argues that the arrival of the unions in the workplace may ‘shock’ the management into adopting more systematic rather than ad hoc management practices and that such innovative workplace practices may enhance an organization's ability to introduce product and process innovations. Further, the independent ‘questioning’ of management deliberations by the unions can also lead to better, more creative and, hence, more productive solutions. Different from their counterparts in advanced economies, Chinese unions are found to have a bargaining power too weak to capture quasi-rents from innovation, but they do play a direct and important role in firm innovation activities. Although there has been much speculation about the union effects on firm innovation in China, there has been limited empirical testing of this relationship. The NBSC enterprise survey dataset provides us with a large, nationally representative sample of workplaces to examine the union impact on firm innovation in China. Our results suggest unionization in China has a positive impact on both innovation output and R&D investment, which is consist with the second hypothesis, the voice effect of unionization, likely through various channels such as the Workers' Congress system and ‘democratic participation in management’. This is very likely to be the case as Chinese unions tend to work collaboratively with management to achieve common goals of productivity enhancement, employee welfare, and social and political stability. The negative effect of unionization on firm innovation through the monopoly face of unions is not supported likely because unions in China have weak bargaining power. These results also suggest that unions in China may play an important role in enhancing a firm's competiveness through innovations.