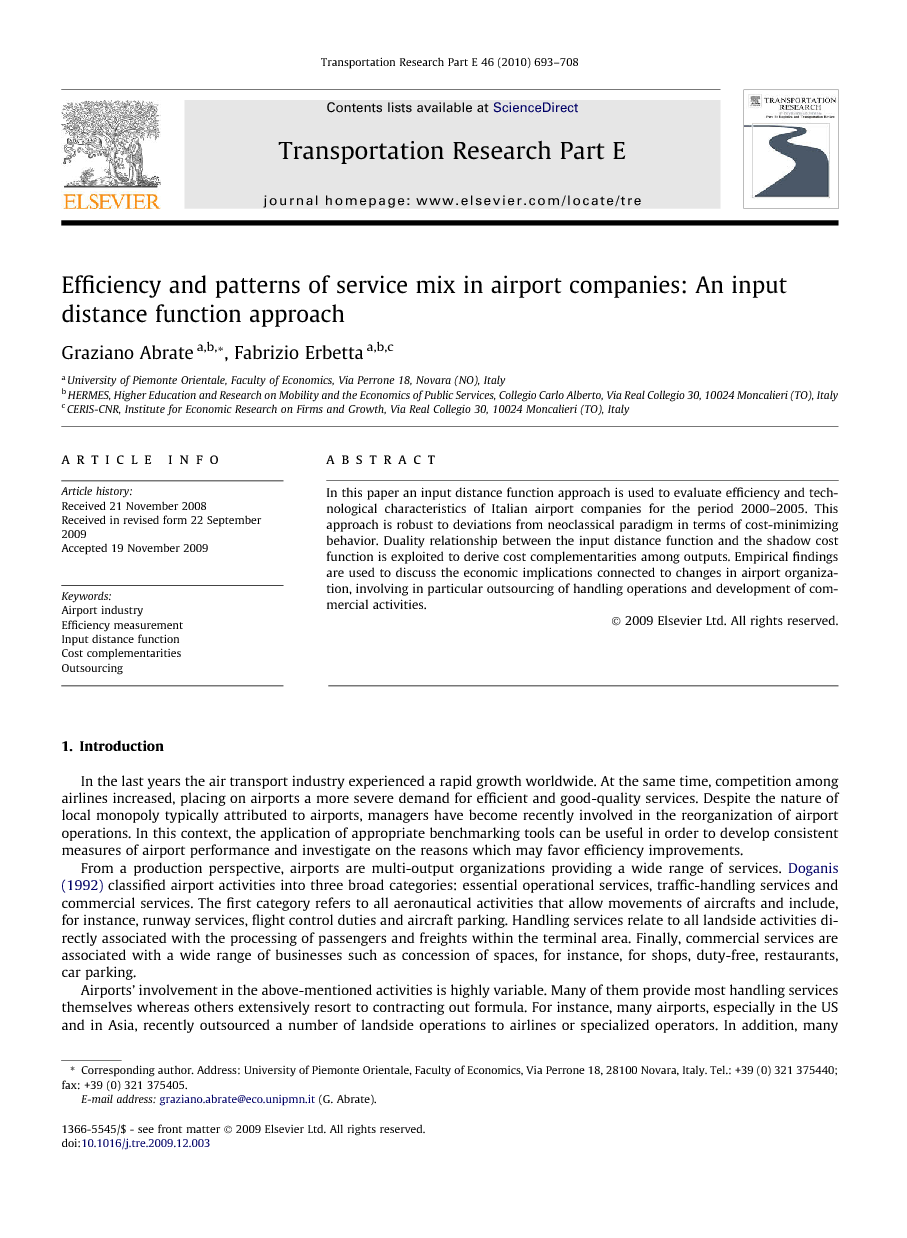 In this paper an input distance function approach is used to evaluate efficiency and technological characteristics of Italian airport companies for the period 2000–2005. This approach is robust to deviations from neoclassical paradigm in terms of cost-minimizing behavior. Duality relationship between the input distance function and the shadow cost function is exploited to derive cost complementarities among outputs. Empirical findings are used to discuss the economic implications connected to changes in airport organization, involving in particular outsourcing of handling operations and development of commercial activities.

In the last years the air transport industry experienced a rapid growth worldwide. At the same time, competition among airlines increased, placing on airports a more severe demand for efficient and good-quality services. Despite the nature of local monopoly typically attributed to airports, managers have become recently involved in the reorganization of airport operations. In this context, the application of appropriate benchmarking tools can be useful in order to develop consistent measures of airport performance and investigate on the reasons which may favor efficiency improvements. From a production perspective, airports are multi-output organizations providing a wide range of services. Doganis (1992) classified airport activities into three broad categories: essential operational services, traffic-handling services and commercial services. The first category refers to all aeronautical activities that allow movements of aircrafts and include, for instance, runway services, flight control duties and aircraft parking. Handling services relate to all landside activities directly associated with the processing of passengers and freights within the terminal area. Finally, commercial services are associated with a wide range of businesses such as concession of spaces, for instance, for shops, duty-free, restaurants, car parking. Airports’ involvement in the above-mentioned activities is highly variable. Many of them provide most handling services themselves whereas others extensively resort to contracting out formula. For instance, many airports, especially in the US and in Asia, recently outsourced a number of landside operations to airlines or specialized operators. In addition, many airports are intensively upgrading their commercial business, though the latter may not be traditionally considered as core activity (Oum et al., 2003). The issue of the organization of airport operations recently received greater attention also by policy makers. In the last decade ground handling services were liberalized in Europe as well as worldwide. The guidelines released by the European Directive 67/1996 aimed at ensuring the opportunity for all potential operators in handling services to enter the market without restrictions. Since then a growing tendency towards the creation of an open market for handling services at European level emerged. The role of empirical analysis appears crucial in order to assess whether scope exists for joint provision of different activities. However, as far as to our knowledge, while only few studies investigated the impact on efficiency of airport organization, in terms of involvement in handling and commercial activities, no one addressed this issue providing empirical estimation of cost complementarities.1 Applying an econometric input distance function to a dataset composed of 26 Italian airports observed over a six-year period (from 2000 to 2005), the main purpose of this paper is to quantify the potential synergies between aeronautical, handling and commercial operations. At the same time, this methodological framework enables us to provide fresh evidence about the debated topics of returns to scale and technical efficiency in airport industry. Results may be relevant to decision makers, both at regulatory and managerial level, especially in the light of the recent evolution of the sector. The Italian context seems suitable to our purposes given that the liberalization process – enforced by law in 1999 (Legislative Decree 18/1999) – induced many airports to outsource handling operations. As a result, the share of handling revenues declined considerably on average (from 47% in 2000 to around 31% in 2005). At the same time, many Italian airports developed a higher involvement in commercial activities, whose revenue share increased from 16% to 22%. The paper is organized as follows. Section 2 presents the literature background concerning the evaluation of airports’ performance. Section 3 focuses on the representation of airport production and on the strategic opportunities for airport managing firms in terms of outsourcing of handling operations and diversification towards commercial activities. Section 4 describes the dataset as well as the input and output variables used in the analysis. Section 5 discusses some properties of the input distance function and illustrates the model specification. Results are shown in Section 6, and in Section 7 some concluding remarks are made.

In this paper we evaluated efficiency conditions and strategic opportunities of airport companies. The literature dealing with airport benchmarking has identified outsourcing of handling operations and diversification to commercial activities as forceful efficiency drivers under the control of airport managers. Nevertheless, there is a lack of evidence concerning the measurement of cost complementarities in multi-output airport technology. In order to fill this gap, we proposed a methodological framework based on the econometric estimation of a multi-output multi-input distance function. Then, we inferred the attractiveness of outsourcing and diversification strategies by analyzing cost complementarities between aeronautical operations on the one hand and handling and commercial activities on the other. We applied this approach to 26 Italian airport companies observed over the period 2000–2005. On the whole, the contribution of this paper to the literature is twofold. First, the use of a parametric input distance function represents an innovative methodology in the assessment of airports’ efficiency and technology characteristics. Generally, this approach allows obtaining parameter estimation without the maintained hypothesis of cost minimization and without requiring input price data, which represent current criticisms in the estimation of traditional cost functions. Secondly, this paper represents a first empirical attempt to investigate the existence of cost complementarities between aeronautical (core) and auxiliary and related activities, grouped here in handling and commercial services. Findings contribute to the debate on the effects of changes in airport firms’ organization. We provide significant evidence supporting outsourcing of handling services as a valid managerial strategy, while no clear conclusion may be drawn for what it concerns diversification to commercial business. Moreover, convenience to outsource handling operations seems to be associated with airport traffic volume, thus suggesting airport size may condition managerial strategy.