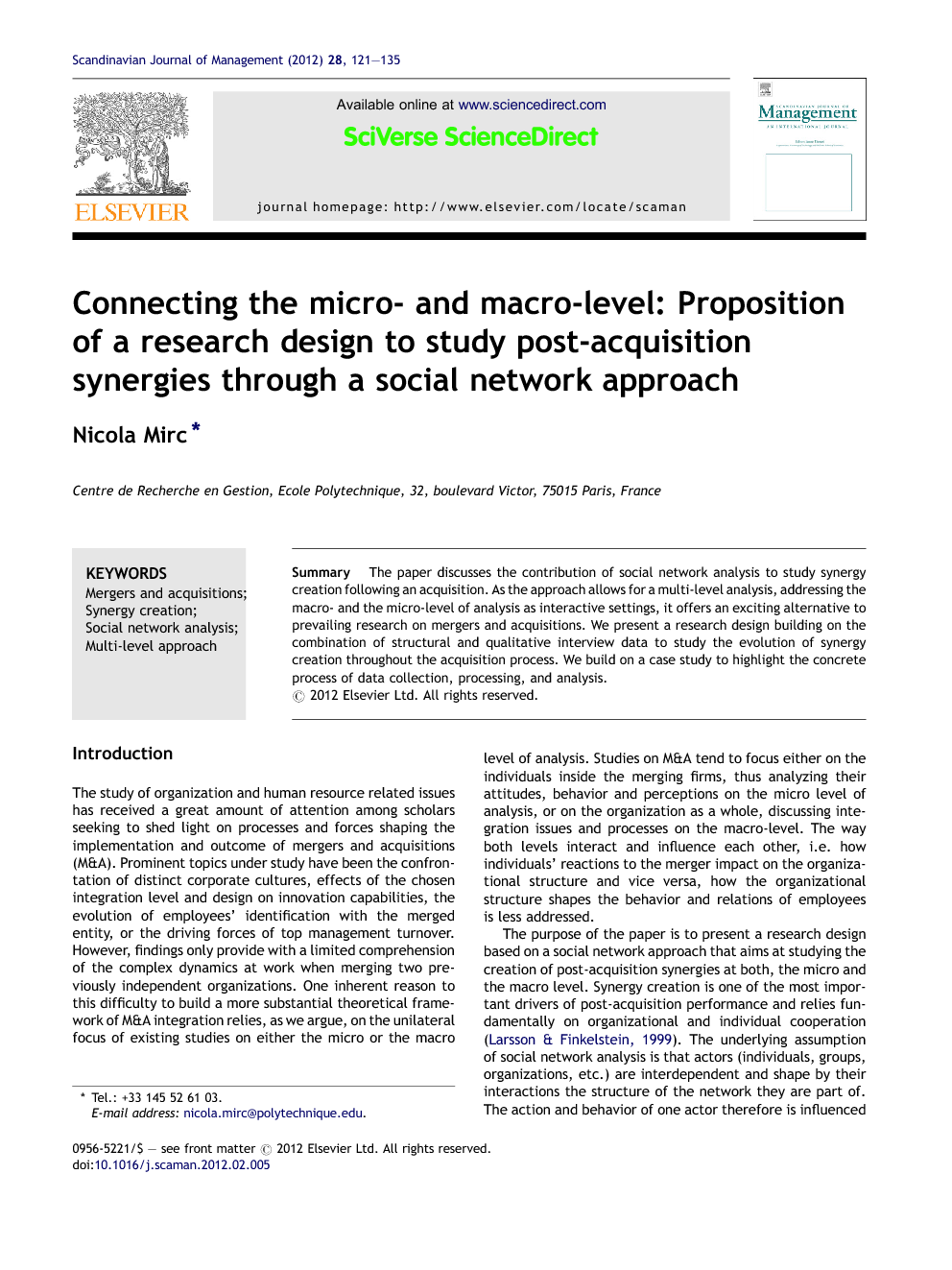 The paper discusses the contribution of social network analysis to study synergy creation following an acquisition. As the approach allows for a multi-level analysis, addressing the macro- and the micro-level of analysis as interactive settings, it offers an exciting alternative to prevailing research on mergers and acquisitions. We present a research design building on the combination of structural and qualitative interview data to study the evolution of synergy creation throughout the acquisition process. We build on a case study to highlight the concrete process of data collection, processing, and analysis.

The study of organization and human resource related issues has received a great amount of attention among scholars seeking to shed light on processes and forces shaping the implementation and outcome of mergers and acquisitions (M&A). Prominent topics under study have been the confrontation of distinct corporate cultures, effects of the chosen integration level and design on innovation capabilities, the evolution of employees’ identification with the merged entity, or the driving forces of top management turnover. However, findings only provide with a limited comprehension of the complex dynamics at work when merging two previously independent organizations. One inherent reason to this difficulty to build a more substantial theoretical framework of M&A integration relies, as we argue, on the unilateral focus of existing studies on either the micro or the macro level of analysis. Studies on M&A tend to focus either on the individuals inside the merging firms, thus analyzing their attitudes, behavior and perceptions on the micro level of analysis, or on the organization as a whole, discussing integration issues and processes on the macro-level. The way both levels interact and influence each other, i.e. how individuals’ reactions to the merger impact on the organizational structure and vice versa, how the organizational structure shapes the behavior and relations of employees is less addressed. The purpose of the paper is to present a research design based on a social network approach that aims at studying the creation of post-acquisition synergies at both, the micro and the macro level. Synergy creation is one of the most important drivers of post-acquisition performance and relies fundamentally on organizational and individual cooperation (Larsson & Finkelstein, 1999). The underlying assumption of social network analysis is that actors (individuals, groups, organizations, etc.) are interdependent and shape by their interactions the structure of the network they are part of. The action and behavior of one actor therefore is influenced by those of his alters, i.e. actors s/he is related to. The social network perspective focuses on relationships, unlike “standard” social science analysis where the focal point is rather on attributes of autonomous individual units. In this perspective, as we will argue, the creation of synergies relies on the emergence of relationships, such as operational cooperation, the transfer of resources, between members of both firms whose behavior is further strongly influenced by the social structures they are embedded in. In a first section, we review M&A research as regards the adopted level of analysis. In a second section, we introduce the social network approach, its scientific roots, main concepts and principles. In a third section, we present the research design that was developed in relation to a concrete case study. We will start by presenting the case study and describe then in detail the way data was collected and processed. In a fourth section we will highlight the process of data analysis and illustrate with some concrete findings how the combination of structural and qualitative interview allowed for addressing synergy creation as a multi-level process. The last fifth section concludes and discusses contributions and limits of the proposed approach.