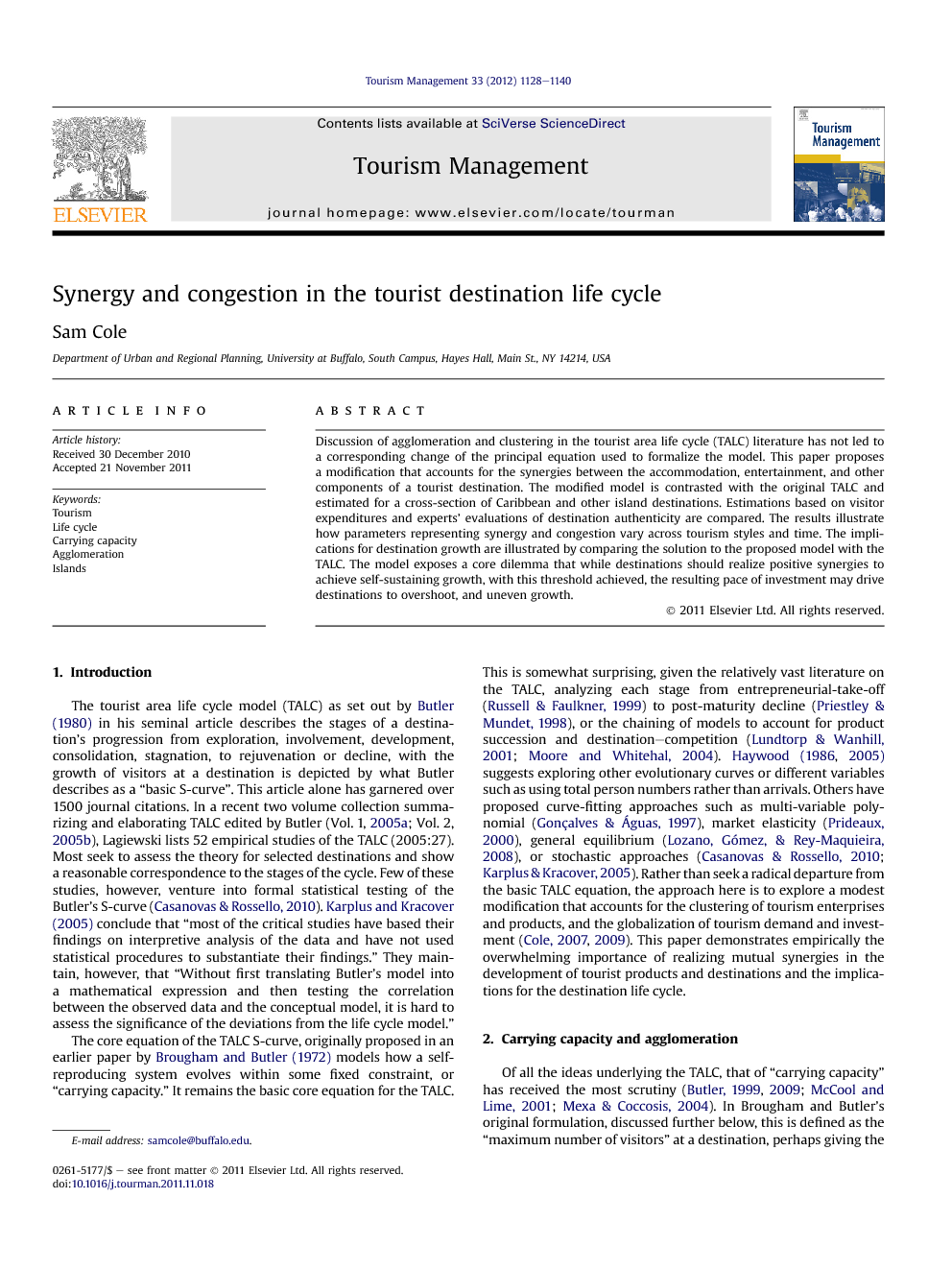 Discussion of agglomeration and clustering in the tourist area life cycle (TALC) literature has not led to a corresponding change of the principal equation used to formalize the model. This paper proposes a modification that accounts for the synergies between the accommodation, entertainment, and other components of a tourist destination. The modified model is contrasted with the original TALC and estimated for a cross-section of Caribbean and other island destinations. Estimations based on visitor expenditures and experts' evaluations of destination authenticity are compared. The results illustrate how parameters representing synergy and congestion vary across tourism styles and time. The implications for destination growth are illustrated by comparing the solution to the proposed model with the TALC. The model exposes a core dilemma that while destinations should realize positive synergies to achieve self-sustaining growth, with this threshold achieved, the resulting pace of investment may drive destinations to overshoot, and uneven growth.

The tourist area life cycle model (TALC) as set out by Butler (1980) in his seminal article describes the stages of a destination's progression from exploration, involvement, development, consolidation, stagnation, to rejuvenation or decline, with the growth of visitors at a destination is depicted by what Butler describes as a “basic S-curve”. This article alone has garnered over 1500 journal citations. In a recent two volume collection summarizing and elaborating TALC edited by Butler (Vol. 1, 2005a; Vol. 2, 2005b), Lagiewski lists 52 empirical studies of the TALC (2005:27). Most seek to assess the theory for selected destinations and show a reasonable correspondence to the stages of the cycle. Few of these studies, however, venture into formal statistical testing of the Butler's S-curve (Casanovas & Rossello, 2010). Karplus and Kracover (2005) conclude that “most of the critical studies have based their findings on interpretive analysis of the data and have not used statistical procedures to substantiate their findings.” They maintain, however, that “Without first translating Butler's model into a mathematical expression and then testing the correlation between the observed data and the conceptual model, it is hard to assess the significance of the deviations from the life cycle model.” The core equation of the TALC S-curve, originally proposed in an earlier paper by Brougham and Butler (1972) models how a self-reproducing system evolves within some fixed constraint, or “carrying capacity.” It remains the basic core equation for the TALC. This is somewhat surprising, given the relatively vast literature on the TALC, analyzing each stage from entrepreneurial-take-off (Russell & Faulkner, 1999) to post-maturity decline (Priestley & Mundet, 1998), or the chaining of models to account for product succession and destination–competition (Lundtorp & Wanhill, 2001; Moore and Whitehal, 2004). Haywood (1986, 2005) suggests exploring other evolutionary curves or different variables such as using total person numbers rather than arrivals. Others have proposed curve-fitting approaches such as multi-variable polynomial (Gonçalves & Águas, 1997), market elasticity (Prideaux, 2000), general equilibrium (Lozano, Gómez, & Rey-Maquieira, 2008), or stochastic approaches (Casanovas & Rossello, 2010; Karplus & Kracover, 2005). Rather than seek a radical departure from the basic TALC equation, the approach here is to explore a modest modification that accounts for the clustering of tourism enterprises and products, and the globalization of tourism demand and investment (Cole, 2007, 2009). This paper demonstrates empirically the overwhelming importance of realizing mutual synergies in the development of tourist products and destinations and the implications for the destination life cycle.