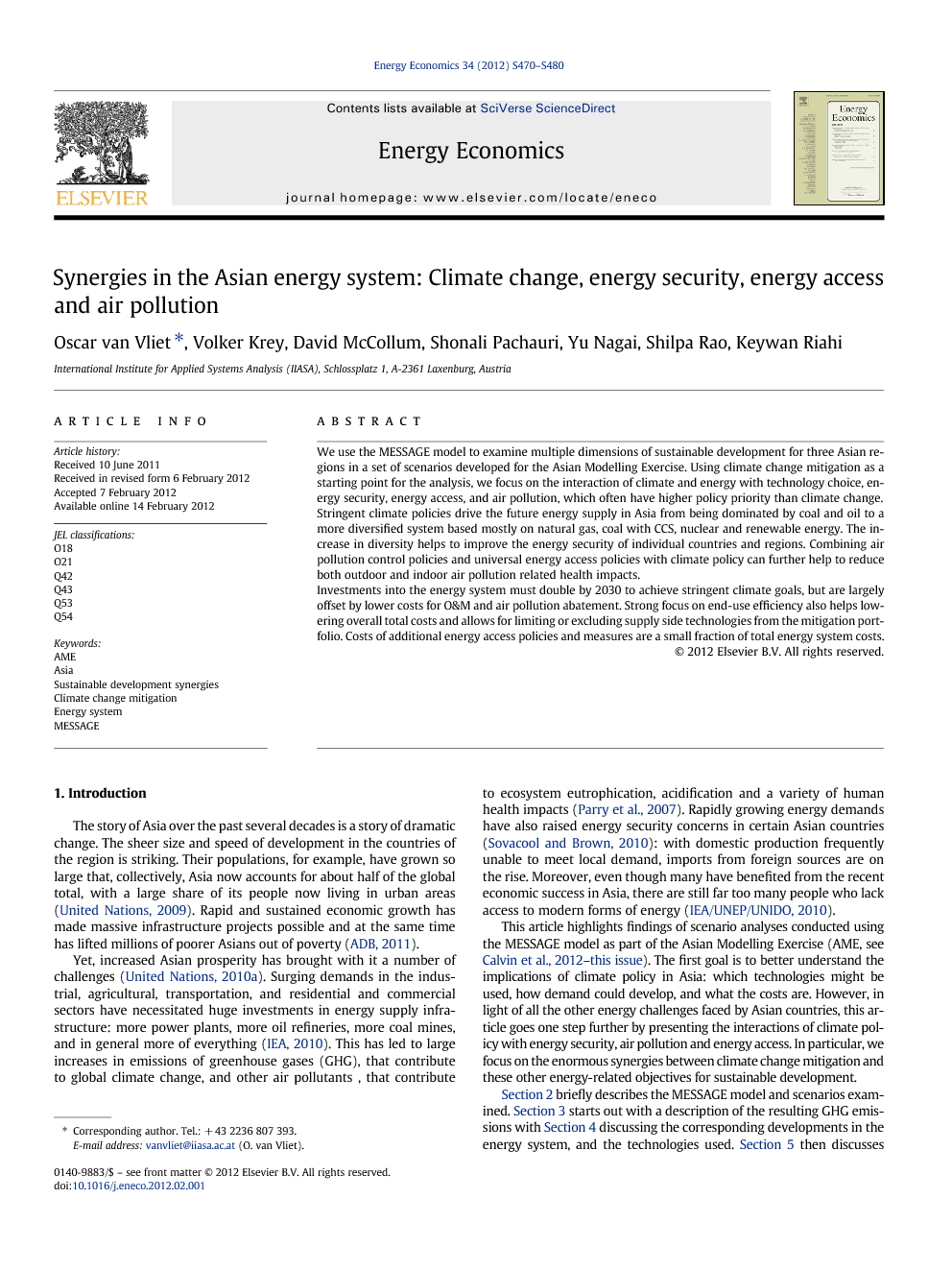 We use the MESSAGE model to examine multiple dimensions of sustainable development for three Asian regions in a set of scenarios developed for the Asian Modelling Exercise. Using climate change mitigation as a starting point for the analysis, we focus on the interaction of climate and energy with technology choice, energy security, energy access, and air pollution, which often have higher policy priority than climate change. Stringent climate policies drive the future energy supply in Asia from being dominated by coal and oil to a more diversified system based mostly on natural gas, coal with CCS, nuclear and renewable energy. The increase in diversity helps to improve the energy security of individual countries and regions. Combining air pollution control policies and universal energy access policies with climate policy can further help to reduce both outdoor and indoor air pollution related health impacts. Investments into the energy system must double by 2030 to achieve stringent climate goals, but are largely offset by lower costs for O&M and air pollution abatement. Strong focus on end-use efficiency also helps lowering overall total costs and allows for limiting or excluding supply side technologies from the mitigation portfolio. Costs of additional energy access policies and measures are a small fraction of total energy system costs.

The story of Asia over the past several decades is a story of dramatic change. The sheer size and speed of development in the countries of the region is striking. Their populations, for example, have grown so large that, collectively, Asia now accounts for about half of the global total, with a large share of its people now living in urban areas (United Nations, 2009). Rapid and sustained economic growth has made massive infrastructure projects possible and at the same time has lifted millions of poorer Asians out of poverty (ADB, 2011). Yet, increased Asian prosperity has brought with it a number of challenges (United Nations, 2010a). Surging demands in the industrial, agricultural, transportation, and residential and commercial sectors have necessitated huge investments in energy supply infrastructure: more power plants, more oil refineries, more coal mines, and in general more of everything (IEA, 2010). This has led to large increases in emissions of greenhouse gases (GHG), that contribute to global climate change, and other air pollutants , that contribute to ecosystem eutrophication, acidification and a variety of human health impacts (Parry et al., 2007). Rapidly growing energy demands have also raised energy security concerns in certain Asian countries (Sovacool and Brown, 2010): with domestic production frequently unable to meet local demand, imports from foreign sources are on the rise. Moreover, even though many have benefited from the recent economic success in Asia, there are still far too many people who lack access to modern forms of energy (IEA/UNEP/UNIDO, 2010). This article highlights findings of scenario analyses conducted using the MESSAGE model as part of the Asian Modelling Exercise (AME, see Calvin et al., 2012–this issue). The first goal is to better understand the implications of climate policy in Asia: which technologies might be used, how demand could develop, and what the costs are. However, in light of all the other energy challenges faced by Asian countries, this article goes one step further by presenting the interactions of climate policy with energy security, air pollution and energy access. In particular, we focus on the enormous synergies between climate change mitigation and these other energy-related objectives for sustainable development. Section 2 briefly describes the MESSAGE model and scenarios examined. Section 3 starts out with a description of the resulting GHG emissions with Section 4 discussing the corresponding developments in the energy system, and the technologies used. Section 5 then discusses synergies with other targets for sustainable development. Section 6 details the investments and economic effects of the previously discussed policies and Section 7 presents conclusions from these analyses.

In this article we have assessed different climate stabilization scenarios and the resulting implications for emerging Asia in the transition to a low carbon-economy. Given the different stages of economic development across emerging Asia, this implies that even under stringent mitigation targets, i.e. stabilizing radiative forcing at 2.6 W/m2 in the long-term, would still allow significant growth of per-capita emissions in parts of emerging Asia. In SAS (including India), per-capita emissions can continue to grow until 2030 while in CPA (including China) the peak would have to occur a decade earlier by 2020 and even before then in PAS. Investments in energy supply and end-use efficiency will be critical for achieving low stabilization targets as well as addressing virtually all other energy challenges. Achieving the stringent climate targets will require doubling investment by 2030 compared with today. For the scenarios presented in this article, this corresponds to annual investment in emerging Asia of 500–690 billion US$ or about 1.7–2.8% of GDP in 2030. Around half of the additional investments for climate change mitigation are offset by lower O&M costs in CPA and SAS. Synergies are smaller, with up to 30–165 billion US$ saved annually in air pollution control and 21–23 billion US$ required annually to achieve universal energy access in 2030. GDP in 2050, which is projected to grow by 620% from 2010 without climate policies, is projected to be 2%–5% lower with stringent climate polices. GHG emissions reductions, investment and finite resources cause a rise in (fossil) energy prices of 50% or more. This drives several developments: renewable technologies, particularly solar electricity, become more viable; CCS is used earlier and more as an interim technology, with more retrofitting of existing power plants; investment into energy efficiency becomes more attractive. Energy demand in 2050 is reduced by some 25%–34% in mitigation scenarios compared to the Reference as a result. We have varied the portfolio of available future energy technologies to account for challenges of integrating these technologies into existing energy infrastructures and issues of public acceptance. For the latter, nuclear energy is an obvious example, but large-scale hydropower, biomass farming, on-shore wind, CCS, and others also have acceptance issues. Our analysis indicates nuclear energy can in general be seen as a choice rather than a necessity, as long as sufficient potential for renewables and/or CCS is locally available. This also implies that different attitudes towards nuclear energy at the national or the regional level can be facilitated. A strong focus on energy efficiency, while challenging in terms of implementation due to multiple barriers present in end-use sectors, helps lowering overall total costs and allows for limiting or excluding supply side technologies from the mitigation portfolio. While climate change mitigation has received a lot of attention over the past few years, it is by no means the only energy challenge facing the world, and less so in emerging Asia over the coming decades. Our analysis shows that stringent climate policy can improve the energy security of individual countries and regions, and that achieving near-term air pollution reduction and health objectives is greatly furthered by climate change mitigation. Improving access to clean energy services for the poor will reduce indoor air pollution and possibly GHG emissions, but will require additional energy access policies and measures. Benefits from reducing indoor air pollution would save up to 0.8 million and from outdoor air pollution would save up to 1.82 million Asian lives annually. Finally, realizing the multiple benefits of the energy transformation requires a holistic and integrated approach that addresses a diverse set of objectives simultaneously. Energy security and air pollution control currently receive more attention from policy makers in emerging Asia and throughout the world than climate change mitigation, mostly due to their much more immediate benefits to societies. A more integrated approach to energy policy making would make synergies in addressing these challenges more apparent, and the resulting reductions in costs. Compared to the dominant fragmented approach, this could make the enormous challenge of scaling up energy investments more achievable.