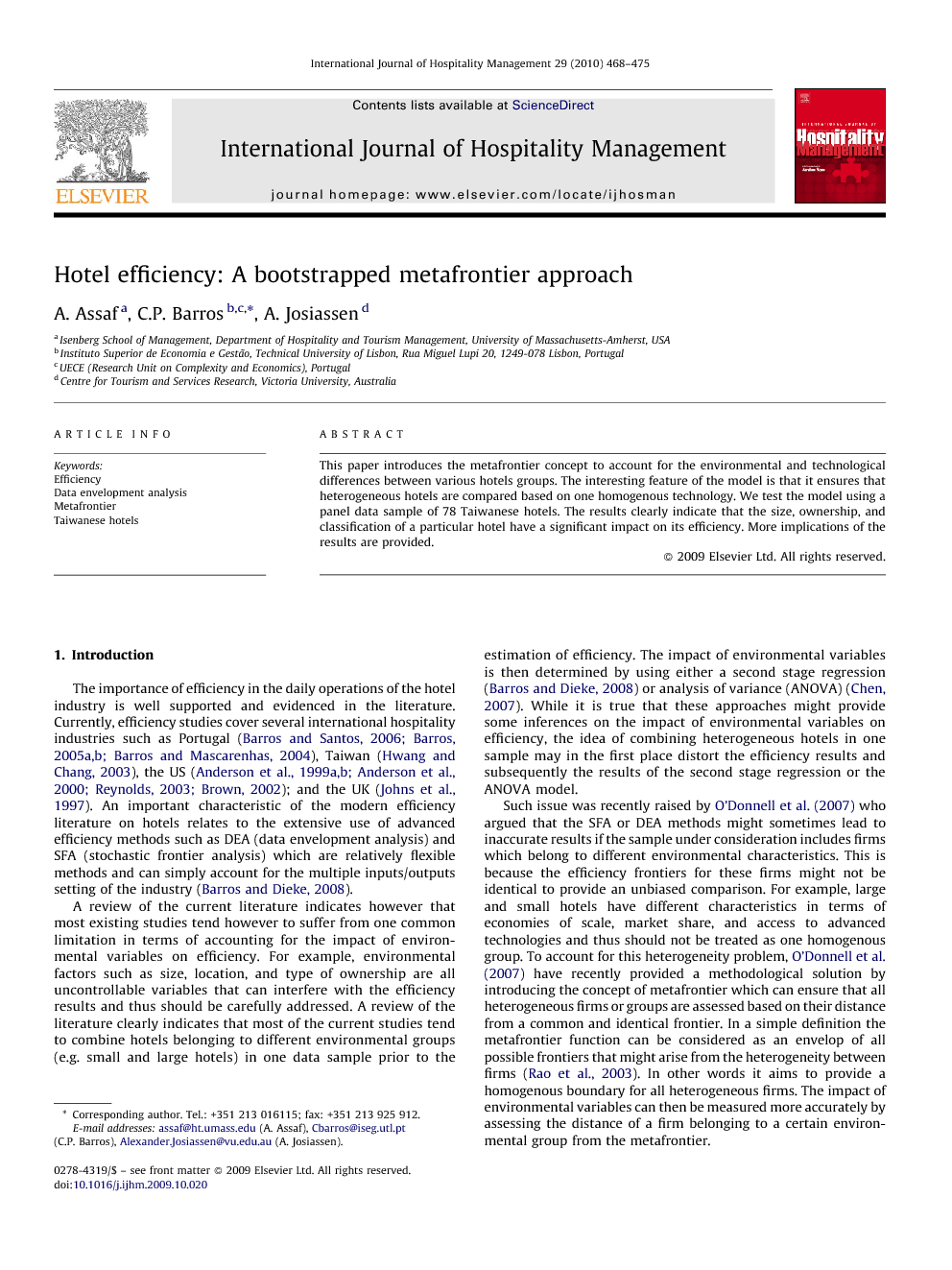 This paper introduces the metafrontier concept to account for the environmental and technological differences between various hotels groups. The interesting feature of the model is that it ensures that heterogeneous hotels are compared based on one homogenous technology. We test the model using a panel data sample of 78 Taiwanese hotels. The results clearly indicate that the size, ownership, and classification of a particular hotel have a significant impact on its efficiency. More implications of the results are provided

The importance of efficiency in the daily operations of the hotel industry is well supported and evidenced in the literature. Currently, efficiency studies cover several international hospitality industries such as Portugal (Barros and Santos, 2006, Barros, 2005a, Barros, 2005b and Barros and Mascarenhas, 2004), Taiwan (Hwang and Chang, 2003), the US (Anderson et al., 1999a, Anderson et al., 1999b, Anderson et al., 2000, Reynolds, 2003 and Brown, 2002); and the UK (Johns et al., 1997). An important characteristic of the modern efficiency literature on hotels relates to the extensive use of advanced efficiency methods such as DEA (data envelopment analysis) and SFA (stochastic frontier analysis) which are relatively flexible methods and can simply account for the multiple inputs/outputs setting of the industry (Barros and Dieke, 2008). A review of the current literature indicates however that most existing studies tend however to suffer from one common limitation in terms of accounting for the impact of environmental variables on efficiency. For example, environmental factors such as size, location, and type of ownership are all uncontrollable variables that can interfere with the efficiency results and thus should be carefully addressed. A review of the literature clearly indicates that most of the current studies tend to combine hotels belonging to different environmental groups (e.g. small and large hotels) in one data sample prior to the estimation of efficiency. The impact of environmental variables is then determined by using either a second stage regression (Barros and Dieke, 2008) or analysis of variance (ANOVA) (Chen, 2007). While it is true that these approaches might provide some inferences on the impact of environmental variables on efficiency, the idea of combining heterogeneous hotels in one sample may in the first place distort the efficiency results and subsequently the results of the second stage regression or the ANOVA model. Such issue was recently raised by O’Donnell et al. (2007) who argued that the SFA or DEA methods might sometimes lead to inaccurate results if the sample under consideration includes firms which belong to different environmental characteristics. This is because the efficiency frontiers for these firms might not be identical to provide an unbiased comparison. For example, large and small hotels have different characteristics in terms of economies of scale, market share, and access to advanced technologies and thus should not be treated as one homogenous group. To account for this heterogeneity problem, O’Donnell et al. (2007) have recently provided a methodological solution by introducing the concept of metafrontier which can ensure that all heterogeneous firms or groups are assessed based on their distance from a common and identical frontier. In a simple definition the metafrontier function can be considered as an envelop of all possible frontiers that might arise from the heterogeneity between firms (Rao et al., 2003). In other words it aims to provide a homogenous boundary for all heterogeneous firms. The impact of environmental variables can then be measured more accurately by assessing the distance of a firm belonging to a certain environmental group from the metafrontier. In this paper we aim to extend the application of the metafrontier to provide further evidence on the impact of environmental variables on hotel efficiency. We divide the hotels into three heterogeneous groups according to three environmental characteristics: size, classification, and type of ownership. These variables are the most popular in several efficiency studies, and were found in most cases to be strong determinants of hotel efficiency. In testing the model we use a sample of Taiwanese hotels ranging from years 2004 to 2008. In this way the study also contribute the analysis of efficiency in this country as none of the previous studies has applied the metafrontier concept. The estimation of the metafrontier is further enhanced with the use of the bootstrap approach which can be used to examine the statistical properties of efficiency scores generated through the metafrontier. The paper unfolds as follows: Section 2 provides the literature review, followed by a discussion of the metafrontier model and the DEA bootstrap in Section 3. A description of the data and variables used is provided in Section 4. Section 5 presents the results and Section 6 presents discussions and summary of the main findings.

The major aim of this study was to provide further validation on the impact of environmental variables on hotel efficiency. The use of the metafrontier methodology is in line with the resource-based theory of Barney, 1986 and Barney, 1991 and Teece et al. (1997) which justifies that hotels are heterogeneous in terms of the resources and capabilities on which they base their managerial practices, and thus heterogeneity is expected to interfere with efficiency. Given that this methodology is used for the first time in this area, it is difficult to have a direct comparison between the efficiency results of this study and other related studies in the area. However, it is possible to discuss whether related studies have converged to similar conclusions in terms of the impact of the selected environmental variables on efficiency. The impact of size for example was tested in this study and it was clear that it is strong determinant of hotel efficiency. For instance, large hotels had higher efficiency in terms of the group and the metafrontier models, as well as a higher TGR. The idea of linking the variable of firm size to profit and performance is traced back to pioneering research in the area of performance studies (Lall, 1980, Wolf, 1977 and Pugh et al., 1969). Different researchers have tested whether larger firms increase market share and achieve economies of scale and as result experience better performance. More recently, Taymaz (2005) has found that larger manufacturing firm size has a positive effect on technical efficiency, and on the ability of the firm to expand its operations. Therefore, in general, it is hypothesized that larger size has a positive relationship with firm profits and firm success. In the hotel sector, studies which have compared small and large hotels have not converged to the same conclusion. For example, two recent studies on Taiwanese hotels (Chen, 2007 and Hwang and Chang, 2003) have indicated that no difference in efficiency exist between large scale and small scale hotels. This finding was later contradicted by Barros and Dieke (2008) who showed that large African hotels are more efficient than small African hotels. The same conclusion was also reached by Barros, 2006 and Barros, 2005a on his study on Portuguese hotels. Thus, in general, the relationship between size and efficiency is an area of contradiction in the literature. The results of this study should provide a clearer reflection on the impact of size, given that it also controls for the heterogeneity between small and large hotel groups. In terms of the relationship between efficiency and the other two selected environmental variables, namely, hotel type and hotel classification, the issue appears to be less contradictory. For example, most studies (Chen, 2007, Wang et al., 2006, Hwang and Chang, 2003 and Barros and Dieke, 2008) on Taiwan and other international hotels have found that the efficiency of chain operations is higher than independent operations. Such agreement in the literature might be attributed to the fact that chain hotels have better marketing strategies, more sound management policies, and stronger economies of scale (Wang et al., 2006). A chain related hotel has also usually a well-known name, established operating policies, sometimes decor standards, and common reservation systems. The large chain hotels, in particular, are more likely to be in highly accessible, central locations and aim to attract key market targets (i.e. business travelers and package tourists) by means of discounts loyalty inducements and rates negotiated with carriers and tour operators. Similar characteristics can also be attributed to the international tourist hotels in Taiwan, which are mostly parts of chains, and have better branding. International tourist hotels have also higher star rating, which is usually associated with higher efficiency through better service quality. As an illustration, Barros and Dieke (2008) have for example recently found that higher star rating leads to a higher technical efficiency. To sum up, what are the main benefits of the results of this study? The findings are based on a more accurate methodology and thus can be used as a starting point for future investigations into the best practices adopted by the best performing hotels. Particularly, future studies might select some efficient and inefficient properties across several Taiwanese areas, and conduct case studies to determine the difference in practices adopted by these different properties. Such investigation might also be extended to develop a series of best practices that can be adopted by the low performing Taiwanese hotels. The findings could also of interest to the Taiwanese government, especially in the process of adopting improvement strategies to the whole industry. Government officials can also know formulate a better understanding of the difference in efficiency between several types of Taiwanese hotels. Specifically, it is crucial that the Taiwanese government adopts policies that suit each individual hotel group. For example, policies towards small hotels might need to be different from large hotels as these hotels have traditional resource limitations and thus might need further assistance. Future strategies might also focus on encouraging group ownership of new hotels. The need for higher quality standards should also be embedded in any new strategy.