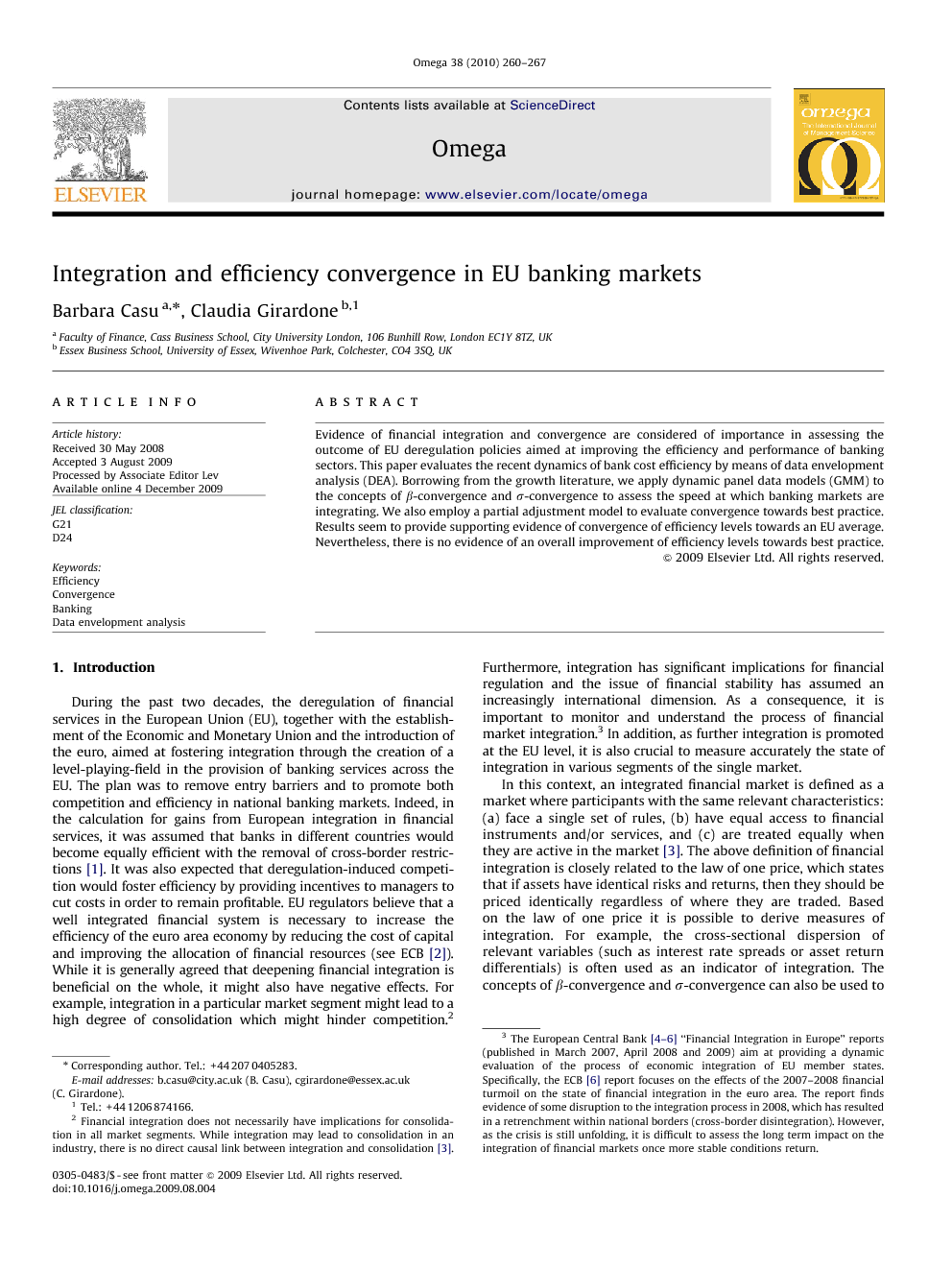 Evidence of financial integration and convergence are considered of importance in assessing the outcome of EU deregulation policies aimed at improving the efficiency and performance of banking sectors. This paper evaluates the recent dynamics of bank cost efficiency by means of data envelopment analysis (DEA). Borrowing from the growth literature, we apply dynamic panel data models (GMM) to the concepts of β-convergence and σ-convergence to assess the speed at which banking markets are integrating. We also employ a partial adjustment model to evaluate convergence towards best practice. Results seem to provide supporting evidence of convergence of efficiency levels towards an EU average. Nevertheless, there is no evidence of an overall improvement of efficiency levels towards best practice.

During the past two decades, the deregulation of financial services in the European Union (EU), together with the establishment of the Economic and Monetary Union and the introduction of the euro, aimed at fostering integration through the creation of a level-playing-field in the provision of banking services across the EU. The plan was to remove entry barriers and to promote both competition and efficiency in national banking markets. Indeed, in the calculation for gains from European integration in financial services, it was assumed that banks in different countries would become equally efficient with the removal of cross-border restrictions [1]. It was also expected that deregulation-induced competition would foster efficiency by providing incentives to managers to cut costs in order to remain profitable. EU regulators believe that a well integrated financial system is necessary to increase the efficiency of the euro area economy by reducing the cost of capital and improving the allocation of financial resources (see ECB [2]). While it is generally agreed that deepening financial integration is beneficial on the whole, it might also have negative effects. For example, integration in a particular market segment might lead to a high degree of consolidation which might hinder competition.2 Furthermore, integration has significant implications for financial regulation and the issue of financial stability has assumed an increasingly international dimension. As a consequence, it is important to monitor and understand the process of financial market integration.3 In addition, as further integration is promoted at the EU level, it is also crucial to measure accurately the state of integration in various segments of the single market. In this context, an integrated financial market is defined as a market where participants with the same relevant characteristics: (a) face a single set of rules, (b) have equal access to financial instruments and/or services, and (c) are treated equally when they are active in the market [3]. The above definition of financial integration is closely related to the law of one price, which states that if assets have identical risks and returns, then they should be priced identically regardless of where they are traded. Based on the law of one price it is possible to derive measures of integration. For example, the cross-sectional dispersion of relevant variables (such as interest rate spreads or asset return differentials) is often used as an indicator of integration. The concepts of β-convergence and σ-convergence can also be used to assess the speed at which markets are integrating. In addition, measuring the degree of cross-border price or yield variation relative to the variability within individual countries may be informative with respect to the degree of integration in different markets.4 This study aims to contribute to the current debate by investigating the impact of integration on the efficiency of EU banking markets. As our definition of financial integration is closely related to the law of one price, this allows us to examine the link between the dynamics of efficiency and financial integration. The concept of price convergence implies that, in case of increased integration, price differentials for the same financial asset should be either eliminated or greatly reduced overtime. This should also apply to the factors of production. Consequently, if factor input prices (i.e. the cost of capital, labour and deposits) are converging across the European Union, so should banks’ cost structures, reflected in a convergence of cost efficiency scores. On the other hand, if country differences in observed cost efficiency levels remain (that is, if there is no evidence of increased convergence), it would imply that the regulatory removal of cross border restrictions alone was not sufficient to equalise the cost structure of EU banking systems and that country-specific structural differences remain relevant. Measuring convergence towards a European average efficiency level is relevant in the context of the single market for financial services, as evidence of convergence would indicate a reduction in the coefficient of variation within countries (i.e. it would indicate increased integration). However, this could occur either because the least efficient banking systems improve their efficiency (i.e. they are “catching up”) or because the most efficient ones see a decline in their efficiency levels (i.e. they are “lagging behind”). Färe et al. [7] re-formalised the notion of “catching up/lagging behind” as the decrease (increase) over time of the distance between a unit actual performance and its potential (i.e. its best practice frontier).5 From a regulatory point of view, measuring convergence towards best practice (that is, towards the maximum attainable efficiency) is important, as increased integration is supposed to bring about improvements in cost efficiency via increased competition [9]. If the process of EU integration had a positive impact on bank cost efficiency, this should result in convergence towards best practice (i.e. an overall improvement of efficiency levels over time). In this study, we evaluate cost efficiency by means of data envelopment analysis (DEA) for the EU-15 countries prior to the latest round of accessions in 2004. In this context, DEA has the advantage of allowing us to compare banks of different size in different countries with respect to one EU-wide frontier without imposing any specific parametric functional form.6 At present, formal statistical tests to assess convergence in a DEA framework do not exist (see Henderson and Zelenyuk [10]). Therefore, we borrow the concepts of β-convergence and σ-convergence from the growth literature (see Barro and Sala-i-Martin, Quah [11], [12], [13] and [14]) and we apply a dynamic panel data analysis. To test for convergence towards best practice we use a variant of the classic partial adjustment model (see also Flannery and Rangan, Gropp and Kashyap, Zhao et al. [15], [16] and [17]). Results seem to provide supporting evidence of convergence of efficiency levels towards an EU average. Nevertheless, the results also indicate persistence of inefficiency, evidenced by a decrease in the overall efficiency levels. The remainder of the paper is structured as follows. Section 2 reviews the main literature on integration and efficiency in banking. Section 3 describes data and empirical methods used. Section 4 discusses the results and Section 5 concludes.

It is a commonly held belief among EU regulators that a well integrated financial system is necessary to increase the efficiency of the euro area economy. In the overall calculation of potential gains from European integration in the financial services, it is often assumed that banks in different countries will become equally efficient with the removal of cross-border restrictions. This paper provides evidence on the dynamics of cost efficiency in the EU-15 banking sectors in the period 1997–2003, prior to the latest round of accession. Cost efficiency is evaluated by means of data envelopment analysis (DEA). The yearly results seem to indicate, for most countries, an improvement in input utilisation in the first years of the analysis and an increase in input wastage from 2000–2001 onwards. To assess the direction and speed of banking markets’ integration, we apply dynamic panel data models to the concepts of β-convergence and σ-convergence. Consistently with the current literature, we find evidence of convergence towards a European average. However, convergence does not translate into improvement of efficiency levels across the EU-15 countries in our sample. Our results indicate that convergence is due to a “lagging behind” rather than “catching up” with best practice. The on-going process of EU integration does not seem to have had a positive impact on bank cost efficiency over the period of analysis, as the results indicate persistence of inefficiency or lack of convergence towards best practice.