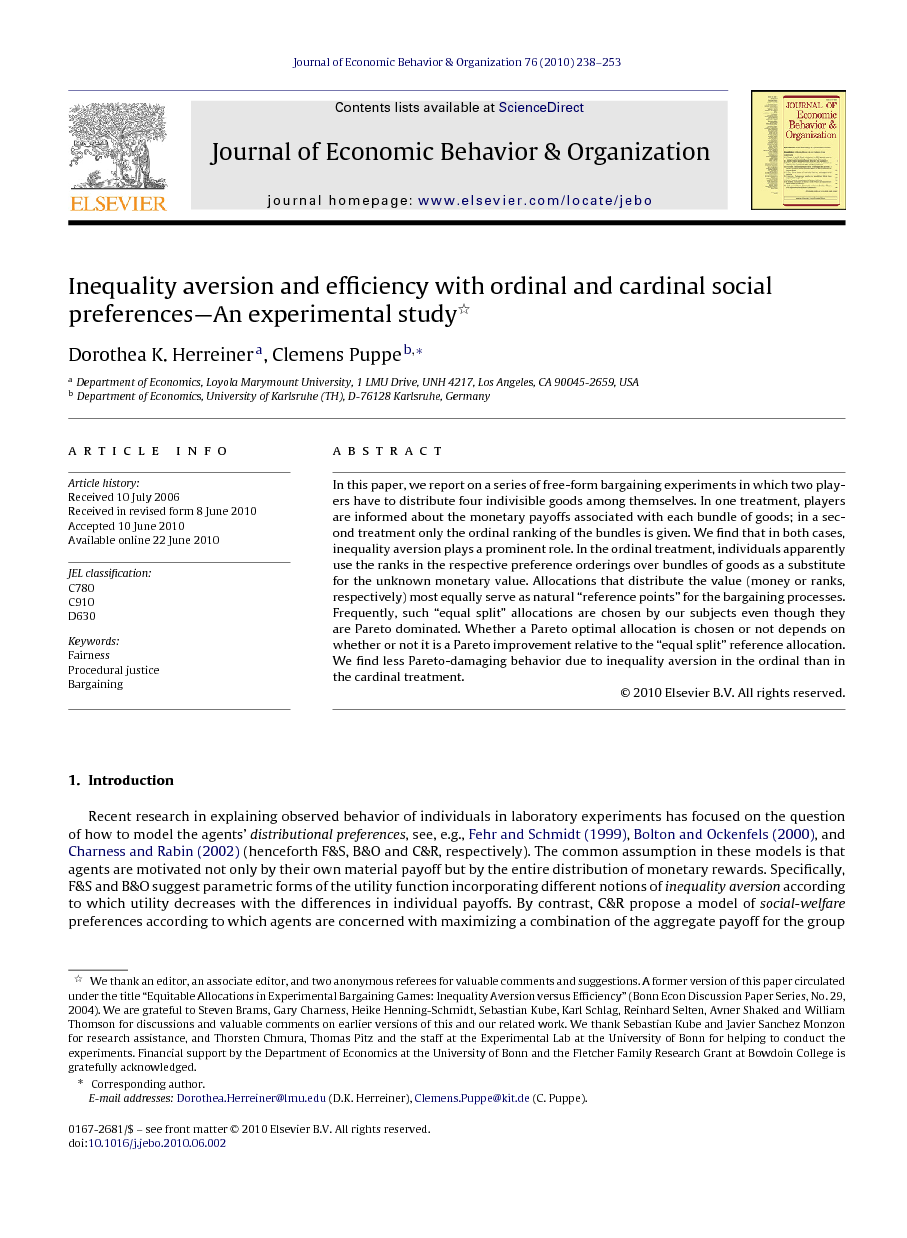 In this paper, we report on a series of free-form bargaining experiments in which two players have to distribute four indivisible goods among themselves. In one treatment, players are informed about the monetary payoffs associated with each bundle of goods; in a second treatment only the ordinal ranking of the bundles is given. We find that in both cases, inequality aversion plays a prominent role. In the ordinal treatment, individuals apparently use the ranks in the respective preference orderings over bundles of goods as a substitute for the unknown monetary value. Allocations that distribute the value (money or ranks, respectively) most equally serve as natural “reference points” for the bargaining processes. Frequently, such “equal split” allocations are chosen by our subjects even though they are Pareto dominated. Whether a Pareto optimal allocation is chosen or not depends on whether or not it is a Pareto improvement relative to the “equal split” reference allocation. We find less Pareto-damaging behavior due to inequality aversion in the ordinal than in the cardinal treatment.

Our experimental results suggest a particular qualitative description of how agents reach agreements in bargaining problems with indivisibilities, the CPIES procedure. The key element is the role of “equal split” as the reference point for the bargaining procedure. Pareto improvements are implemented provided that they do not create too much inequality. Indeed, our most striking finding is that a majority of 51 percent of bargaining partners reject the payoff distribution (46,75) in favor of the Pareto inferior equal split distribution (45,45) (aggregated data from EXP I, R3 and EXP II, R3). This is in contrast to the results of C&R, who “find a strong degree of respect for social efficiency” (p. 849). It also conflicts with Kritikos and Bolle's (2001) experiments in which the majority of participants were efficiency- rather than equity-oriented. However, the experiments in these studies consisted of simple dictator games and not of dynamic bargaining games as in our present study. Inspecting the communication protocols we find strong evidence that procedural aspects play a decisive role in our experiments. For instance, in R3 of EXP I five of the seven pairs who settled on the Pareto optimal distribution (46,75) considered the equal payoff distribution (45,45) at an earlier stage, confirming the explicit reference status of the latter. In this example, it also seems to matter who is the first to propose the Pareto improvement. A detailed analysis of this issue of path dependence is beyond the scope of the present paper, but generally partners seem to agree more easily on the payoff distribution (46,75) if the first individual suggests it to the second individual than vice versa. It seems to matter whether the individual suggesting the Pareto improvement benefits more or less than the other person – an issue we plan to investigate further. The failure of Pareto optimality due to equity concerns is much less pronounced in the ordinal treatment, even though we do find evidence that the ranks of bundles in the preference orderings serve as substitutes for the unknown monetary payoff. In some cases of the ordinal treatment there is no longer one clear equal split reference distribution because the inequality associated with any rank difference is unknown. Despite this difficulty, most participants try to establish an “equal split” reference allocation during the bargaining process confirming the key role this reference allocation plays.