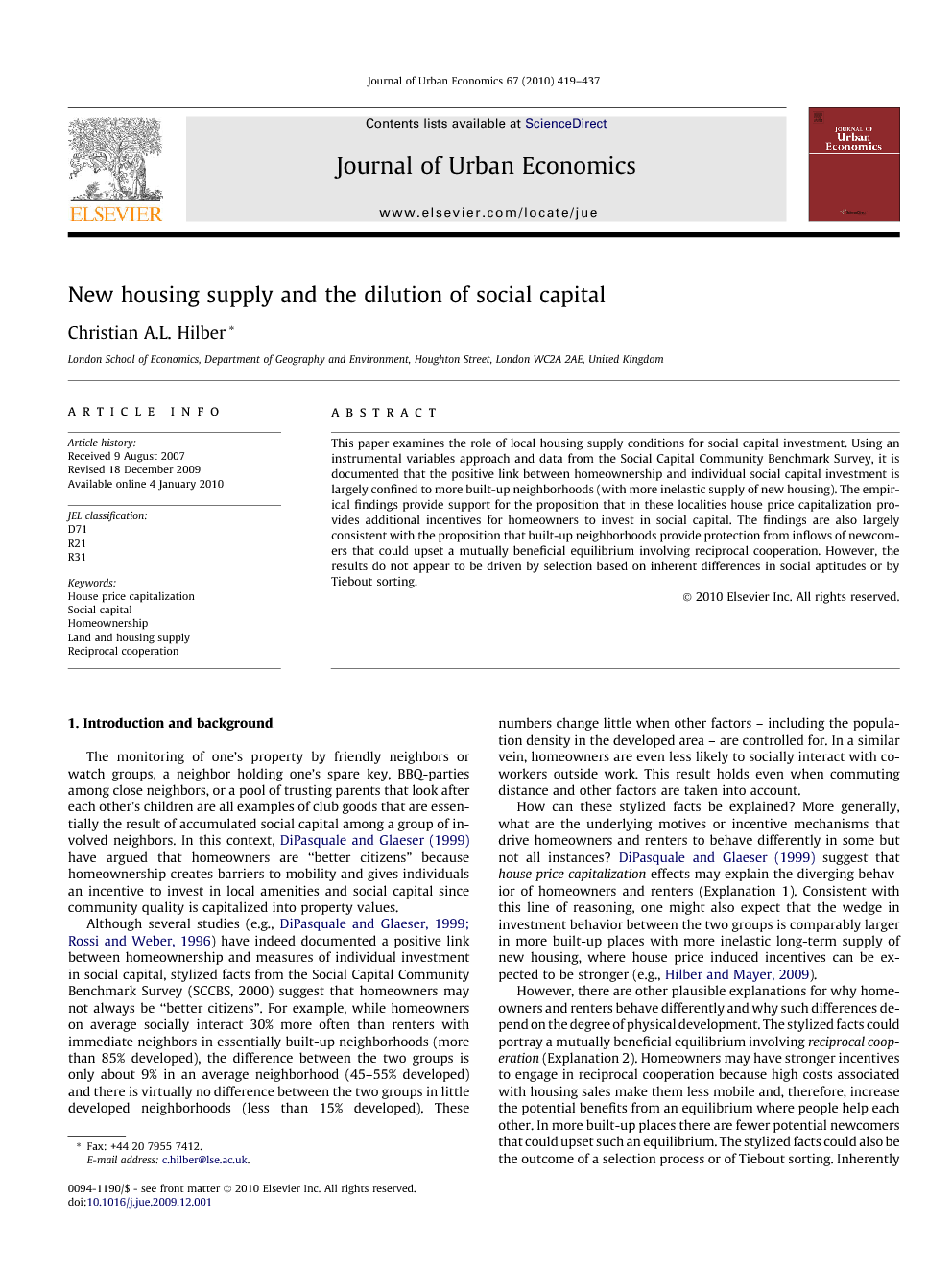 This paper examines the role of local housing supply conditions for social capital investment. Using an instrumental variables approach and data from the Social Capital Community Benchmark Survey, it is documented that the positive link between homeownership and individual social capital investment is largely confined to more built-up neighborhoods (with more inelastic supply of new housing). The empirical findings provide support for the proposition that in these localities house price capitalization provides additional incentives for homeowners to invest in social capital. The findings are also largely consistent with the proposition that built-up neighborhoods provide protection from inflows of newcomers that could upset a mutually beneficial equilibrium involving reciprocal cooperation. However, the results do not appear to be driven by selection based on inherent differences in social aptitudes or by Tiebout sorting.

The monitoring of one’s property by friendly neighbors or watch groups, a neighbor holding one’s spare key, BBQ-parties among close neighbors, or a pool of trusting parents that look after each other’s children are all examples of club goods that are essentially the result of accumulated social capital among a group of involved neighbors. In this context, DiPasquale and Glaeser (1999) have argued that homeowners are “better citizens” because homeownership creates barriers to mobility and gives individuals an incentive to invest in local amenities and social capital since community quality is capitalized into property values. Although several studies (e.g., DiPasquale and Glaeser, 1999 and Rossi and Weber, 1996) have indeed documented a positive link between homeownership and measures of individual investment in social capital, stylized facts from the Social Capital Community Benchmark Survey (SCCBS, 2000) suggest that homeowners may not always be “better citizens”. For example, while homeowners on average socially interact 30% more often than renters with immediate neighbors in essentially built-up neighborhoods (more than 85% developed), the difference between the two groups is only about 9% in an average neighborhood (45–55% developed) and there is virtually no difference between the two groups in little developed neighborhoods (less than 15% developed). These numbers change little when other factors – including the population density in the developed area – are controlled for. In a similar vein, homeowners are even less likely to socially interact with co-workers outside work. This result holds even when commuting distance and other factors are taken into account. How can these stylized facts be explained? More generally, what are the underlying motives or incentive mechanisms that drive homeowners and renters to behave differently in some but not all instances? DiPasquale and Glaeser (1999) suggest that house price capitalization effects may explain the diverging behavior of homeowners and renters (Explanation 1). Consistent with this line of reasoning, one might also expect that the wedge in investment behavior between the two groups is comparably larger in more built-up places with more inelastic long-term supply of new housing, where house price induced incentives can be expected to be stronger (e.g., Hilber and Mayer, 2009). However, there are other plausible explanations for why homeowners and renters behave differently and why such differences depend on the degree of physical development. The stylized facts could portray a mutually beneficial equilibrium involving reciprocal cooperation (Explanation 2). Homeowners may have stronger incentives to engage in reciprocal cooperation because high costs associated with housing sales make them less mobile and, therefore, increase the potential benefits from an equilibrium where people help each other. In more built-up places there are fewer potential newcomers that could upset such an equilibrium. The stylized facts could also be the outcome of a selection process or of Tiebout sorting. Inherently more sociable individuals may select more developed or more densely populated places and these sociable people could also have a comparably greater propensity to own in more urban settings (Explanation 3). Similarly, households may Tiebout sort based on their preferences for social interactions (Explanation 4). The empirical findings presented in this paper provide strong support for the proposition that individual investment in social capital is facilitated by house price induced incentives (Explanation 1). The findings are also largely consistent with the proposition that social interactions at the neighborhood level are driven by benefits arising from reciprocal cooperation (Explanation 2). However, reciprocal behavior alone cannot explain all of the results. Moreover, the findings appear to be neither consistent with the outcome of a selection process nor with that of Tiebout sorting (Explanations 3 and 4). The findings have important implications for the literature on the accumulation of social capital and the provision of social capital induced club goods. Previous studies suggest that house price capitalization may provide a mechanism to induce homeowners to take into account preferences of future homebuyers when voting on durable local public goods, even when residents are mobile (see e.g., Brueckner and Joo, 1991 and Sonstelie and Portney, 1978; or Wildasin, 1979 for the theory and Hilber and Mayer, 2009, for evidence).1 However, in the case of neighborhood-specific social capital, investment decisions are not reached at the ballot. Instead they are individual verdicts, potentially encouraging free riding behavior. One countervailing argument is that free riding (by selling the house) may be an unattractive option if access to benefits from social capital induced club goods are partially excludable and transaction costs associated with the sale of a property exceed the benefits derived from the improved neighborhood quality. The empirical evidence in this paper implies that housing transaction costs may indeed prevent free riding and may, therefore, encourage the provision of neighborhood-specific social capital. Moreover, housing transaction costs may also encourage reciprocal cooperation, further reinforcing social capital accumulation. This paper provides additional support for the proposition by Hilber and Mayer (2009) that house price induced incentive effects may be confined mainly to places where the supply of land available for new development is scarce. This finding has important implications for a wide range of studies, for example, studies that conclude that homeowners are somehow “better citizens” because homeownership encourages civic engagement (e.g., Hoff and Sen, 2005 and DiPasquale and Glaeser, 1999) or because homeowners are more motivated to control local government (e.g., Fischel, 2001 and Dehring et al., 2008).

In this paper I present evidence suggesting that the causal positive effect of individual homeownership on individual investments in neighborhood-specific social capital is mainly confined to more built-up places. Homeownership alone does not ensure the formation of social capital. A number of explanations are explored. Overall, the empirical findings provide strong support for the proposition that individual investment in social capital is facilitated by house price induced incentives. In built-up localities the social capital induced entry of newcomers increases house values more strongly, discouraging others from entering and thereby preventing (further) dilution of social capital. Hence, house price capitalization ensures that immobile homeowners – in contrast to renters – can internalize the benefits of their investments. In a similar vein, the social capital induced house price premium ensures that individuals only enter a neighborhood when they have a desire to engage (immediately) in the neighborhood’s social network(s), ensuring the provision of social capital induced club goods in the longer run. In contrast, in less developed neighborhoods there appear to be few (additional) incentives for homeowners to invest in social capital. The evidence is also largely consistent with the proposition that social interactions at the neighborhood level are driven by benefits arising from reciprocal cooperation. Inelastic housing supply may help sustain a reciprocal cooperation equilibrium. However, the reciprocal cooperation-mechanism alone cannot explain all findings. Finally, the proposition that the stylized facts presented at the outset are driven by selection based on inherent differences in social aptitudes or by Tiebout sorting can be discounted. In a broader context, the findings imply that house price capitalization (and possibly reciprocal cooperation) may only provide a compelling mechanism for homeowners to make long-term investments in their neighborhoods and local communities (i.e., to take into account the preferences of future homebuyers and possibly future generations) if housing transaction costs are sufficiently high and potential new housing supply is limited. Therefore, differences in local housing market conditions may provide an additional explanation – besides sorting and peer effects – why suburban locations in highly urbanized areas (i.e., locations with high homeownership rates and little developable land) do not only have better local public services (such as local public schools) but also greater accumulation of social capital.