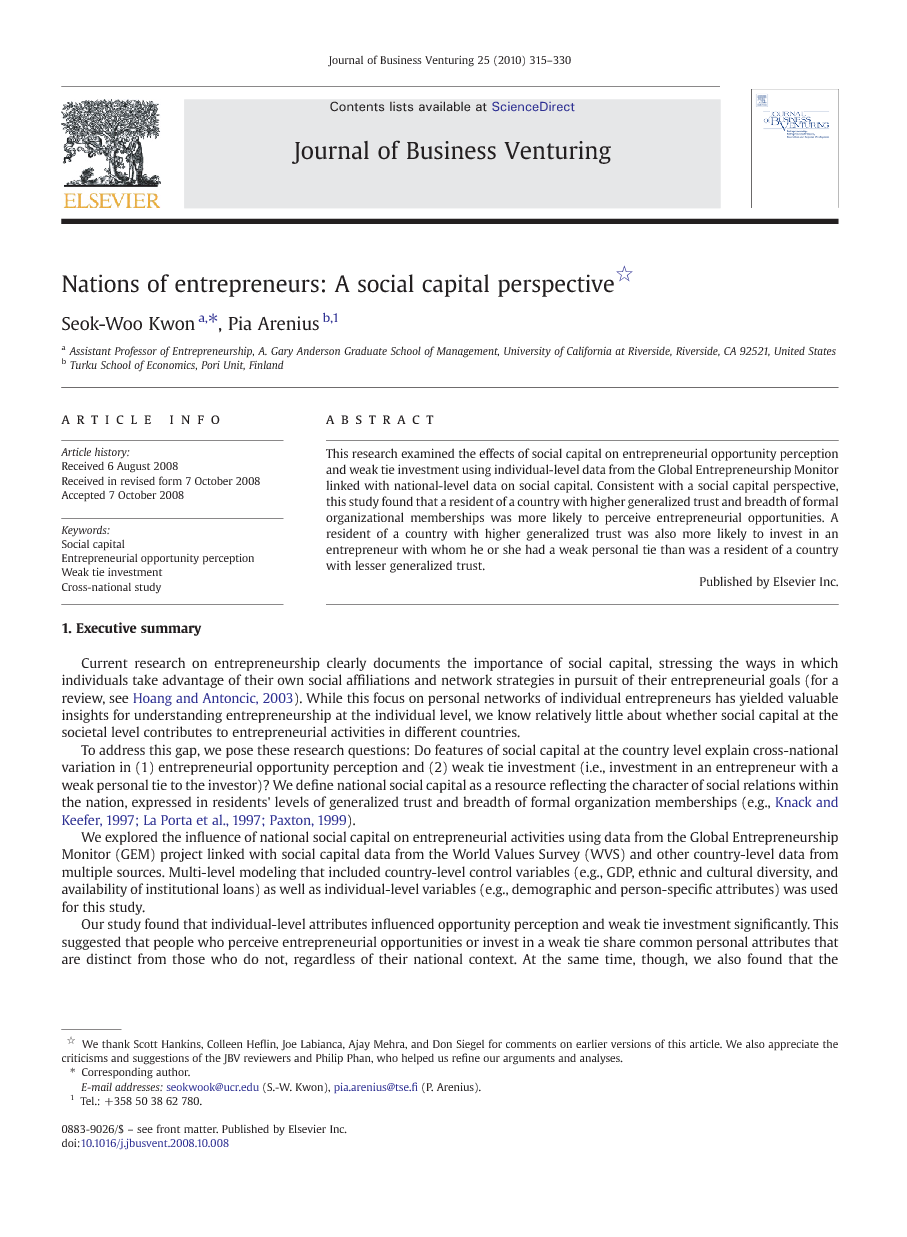 There is a growing literature suggesting that social capital at the national level is positively associated with investment and growth at the country level. Knack and Keefer (1997), for example, show that an increase of one standard deviation in country-level trust predicts an increase in economic growth of more than one-half of a standard deviation for a sample of 29 countries. Using a bigger sample of 41 countries, Zak and Knack (2001) show that, controlling for other influences, national growth rises by nearly 1% for each 15 percentage point increase in trust. La Porta et al. (1997) also find that, holding per capita GNP constant, an increase in trust raises large firms' share of the economy for a sample of 40 countries. If social capital influences the economic development of a country significantly, it seems reasonable to expect that social capital would have some influence on the entrepreneurial activities of a country as well: We suggest this because economic activities are also significantly driven by a high level of entrepreneurial activities in a country (Schumpeter, 1942). However, social capital research has not adequately addressed this causal link at the country level—for an early exception to this claim, see Tocqueville and Reeve (1835)—and, instead, tends to focus on a micro perspective at the individual level. Thus, an extensive body of theoretical and empirical research now exists which links personal networks of individuals with opportunity recognition (Arenius and De Clercq, 2005 and Davidsson and Honig, 2003), resource acquisition (Aldrich and Zimmer, 1986 and Shane and Cable, 2002), the creation of new ventures (Johannisson and Ramirez-Pasillas, 2001), and venture performance (Honig, 1998 and Ruef, 2002). However, the question of whether and how social capital at the societal level encourages entrepreneurial activities in a country has been overlooked by entrepreneurship researchers. This is unfortunate since there is growing evidence that social networks of individual entrepreneurs are embedded in the broader societal context (e.g., Dodd and Patra, 2002 and Staber and Aldrich, 1995) and that actions and outcomes of individual actors are influenced not just by their dyadic relationships with network contacts but also by social environments at large (Granovetter, 1992). For those reasons, the previous research that focuses only on the dyadic network ties of individuals runs the risk of neglecting contextual factors that can significantly facilitate or constrain individual social capital (Adler and Kwon, 2002). This risk is even greater in international entrepreneurship research, given that researchers have empirically documented a large cross-national variation in social capital at the societal level (e.g., Paxton, 2002 and Schofer and Fourcade-Gourinchas, 2001). To address this gap in the extant research on the relationship between entrepreneurship and social capital at the societal level, we pose these research questions: Do features of social capital at the country level explain cross-national variation in (1) entrepreneurial opportunity perception and (2) weak tie investment (i.e., investment in an entrepreneur with a weak personal tie to the investor)? We focus on these entrepreneurial phenomena first, because much of entrepreneurship involves seeking new opportunities and investments (Shane and Venkataraman, 2000), and second, because recognizing such entrepreneurial and investment opportunities is conditioned by the entrepreneur's social context (Jack and Anderson, 2002). While we acknowledge that opportunity perception and weak tie investment are individual-level phenomena, we argue that they are embedded in the societal context and, thus, shaped by its social capital. In the following sections, we formulate hypotheses on the above question and test these hypotheses with unique datasets that permit cross-level modeling.