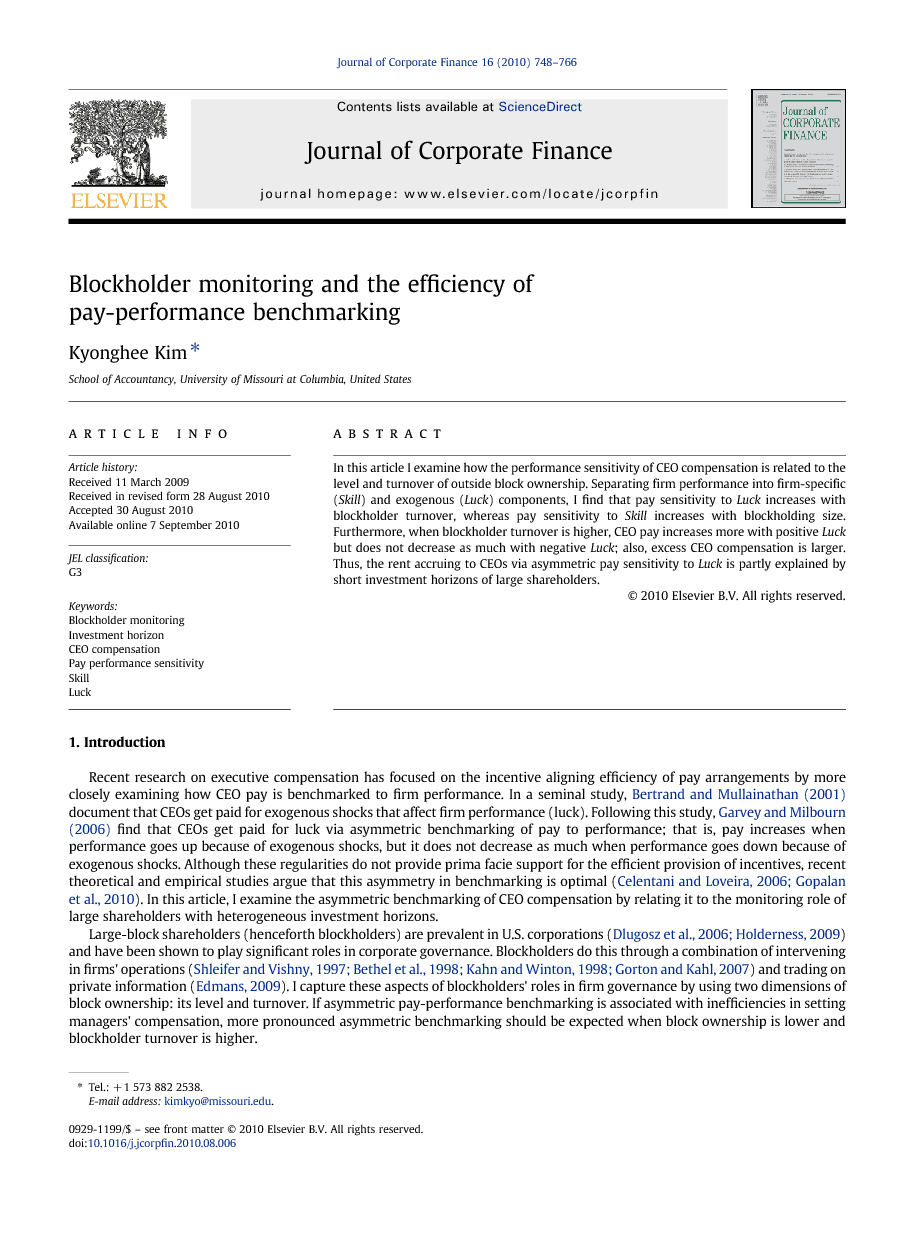 In this article I examine how the performance sensitivity of CEO compensation is related to the level and turnover of outside block ownership. Separating firm performance into firm-specific (Skill) and exogenous (Luck) components, I find that pay sensitivity to Luck increases with blockholder turnover, whereas pay sensitivity to Skill increases with blockholding size. Furthermore, when blockholder turnover is higher, CEO pay increases more with positive Luck but does not decrease as much with negative Luck; also, excess CEO compensation is larger. Thus, the rent accruing to CEOs via asymmetric pay sensitivity to Luck is partly explained by short investment horizons of large shareholders.

In this article I introduce the investment horizon of blockholders as an additional dimension of block ownership and examine how heterogeneous investment horizons of blockholders, in addition to block ownership size, are associated with firms' policies on executive compensation. I find that larger block ownership is associated with improvements in PPS of CEO compensation via increased sensitivity of CEO pay to Skill, where Skill is defined as the firm-specific component of stock performance during the fiscal year. Similarly, longer investment horizons of blockholders measured by lower turnover rates of block ownership are associated with improvements in pay-performance benchmarking via decreased pay sensitivity to Luck, where Luck is defined as the component of stock performance due to the industry and the market. I also find that lower turnover rates of block ownership mitigate the asymmetric benchmarking of pay to Luck documented by Bertrand & Mullainathan, 2001 and Garvey & Milbourn, 2006. The association between blockholder turnover and asymmetric pay sensitivity to Luck is robust to various alternative explanations, such as other governance mechanisms, blockholders' investment strategies as measured by blockholder type, and prior firm performance. These findings make two contributions to the literature. First, the results suggest that investment horizon is an important determinant of monitoring activities even for shareholders with large ownership stakes. Demsetz and Villalonga (2001) argue that as a monitoring mechanism, ownership structure should be represented by more than just its concentration. To my knowledge, this is the first study that explicitly links blockholder investment horizons to firm policies. Second, I add to the literature on the efficiency of pay-performance benchmarking. Responding to the suggestion of poor corporate governance implied by evidence of asymmetric benchmarking of pay to luck (Bertrand & Mullainathan, 2001 and Garvey & Milbourn, 2006), recent studies provide optimal contracting explanations of this asymmetry as an alternative (Celentani & Loveira, 2006 and Gopalan et al., 2010). By documenting systematic associations between pay-performance benchmarking and block ownership and turnover, I argue that at least a part of the inefficiencies in pay-performance benchmarking arise from poor governance.