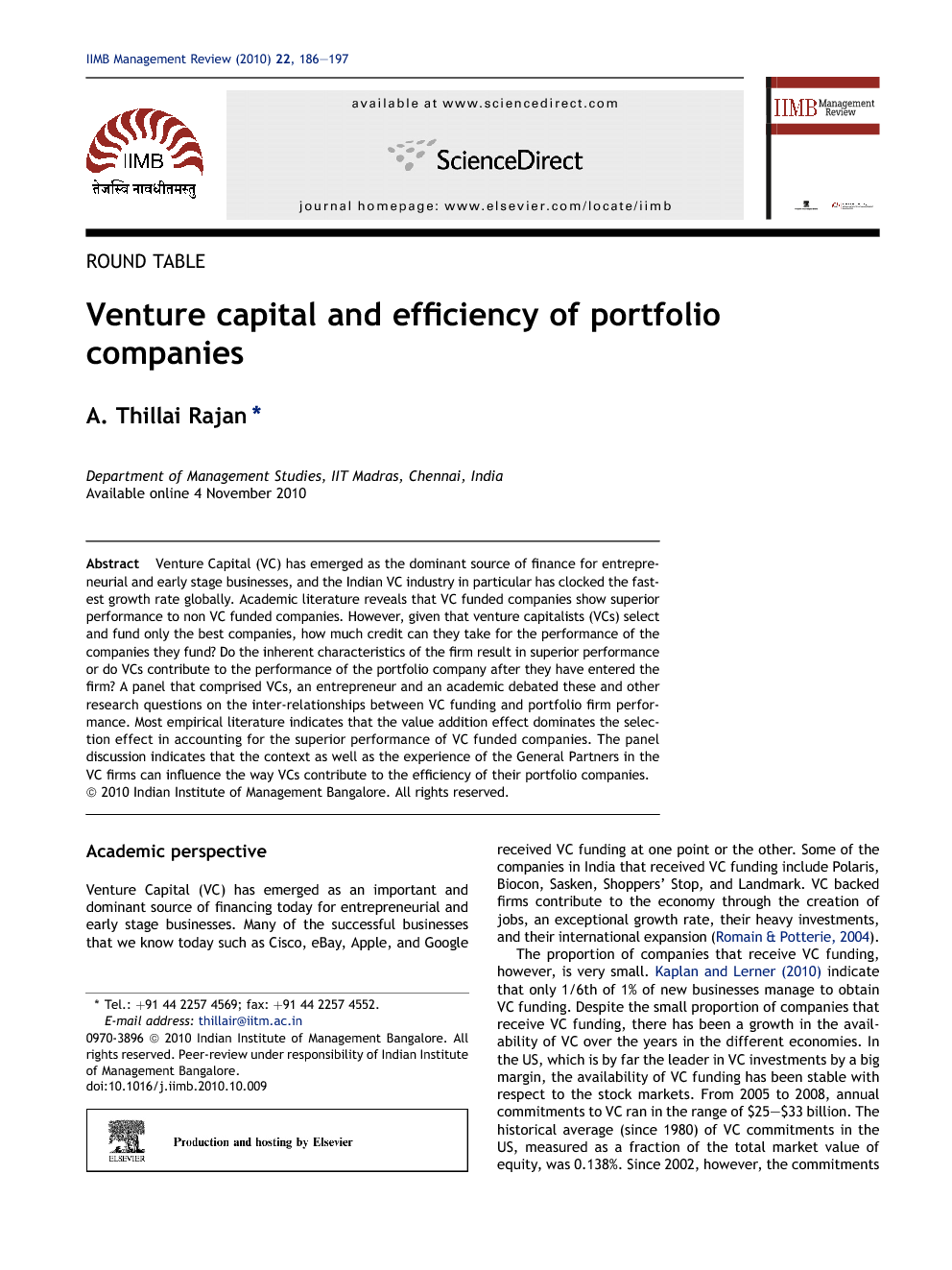 Venture Capital (VC) has emerged as the dominant source of finance for entrepreneurial and early stage businesses, and the Indian VC industry in particular has clocked the fastest growth rate globally. Academic literature reveals that VC funded companies show superior performance to non VC funded companies. However, given that venture capitalists (VCs) select and fund only the best companies, how much credit can they take for the performance of the companies they fund? Do the inherent characteristics of the firm result in superior performance or do VCs contribute to the performance of the portfolio company after they have entered the firm? A panel that comprised VCs, an entrepreneur and an academic debated these and other research questions on the inter-relationships between VC funding and portfolio firm performance. Most empirical literature indicates that the value addition effect dominates the selection effect in accounting for the superior performance of VC funded companies. The panel discussion indicates that the context as well as the experience of the General Partners in the VC firms can influence the way VCs contribute to the efficiency of their portfolio companies.

Venture Capital (VC) has emerged as an important and dominant source of financing today for entrepreneurial and early stage businesses. Many of the successful businesses that we know today such as Cisco, eBay, Apple, and Google received VC funding at one point or the other. Some of the companies in India that received VC funding include Polaris, Biocon, Sasken, Shoppers’ Stop, and Landmark. VC backed firms contribute to the economy through the creation of jobs, an exceptional growth rate, their heavy investments, and their international expansion (Romain & Potterie, 2004). The proportion of companies that receive VC funding, however, is very small. Kaplan and Lerner (2010) indicate that only 1/6th of 1% of new businesses manage to obtain VC funding. Despite the small proportion of companies that receive VC funding, there has been a growth in the availability of VC over the years in the different economies. In the US, which is by far the leader in VC investments by a big margin, the availability of VC funding has been stable with respect to the stock markets. From 2005 to 2008, annual commitments to VC ran in the range of $25–$33 billion. The historical average (since 1980) of VC commitments in the US, measured as a fraction of the total market value of equity, was 0.138%. Since 2002, however, the commitments have been slightly above the historical average at 0.146%. Similarly, the historical average of the VC investments as a fraction of total stock market value was 0.164%, and the average since 2002 is 0.155% (Kaplan & Lerner, 2010). If we factor the growth in the economy and the stock market over the years, we can infer that the availability of VC funding has steadily increased over the years. By contrast, the growth of VC in India has been more recent. The amount invested increased from $1.4 billion in 2004 to $22 billion in 2007, before reducing to $8.1 billion in 2008 (Thillai Rajan & Deshmukh, 2009). The VC investments in India grew at a CAGR of 47% during 2004–08, which is one of the highest growth rates in the world. By contrast, the investments in the US grew only at the rate of 6% during the same period. VC investments in India as a percentage of GDP grew from a mere 0.4% of GDP in 2004 to more than 1.5% of GDP in 2008, whereas VC investment in the US as a percentage of GDP is relatively constant and hovers around 0.7%–0.8% of GDP. This part of the paper provides an academic perspective on how venture capitalists (VCs) contribute to the portfolio companies that they have invested in. The rest of the academic perspective is structured as follows: Section 2 provides an overview of VC investment. VC has several features that distinguish it from other sources of financing. The differences between VC and bank financing, a prominent source of financing for businesses, are also highlighted. Section 3 discusses the performance of VC funded and non VC funded companies. Examining whether VC funded companies show superior performance as compared to non VC funded companies, this section summarises the findings from some well known comparative studies on VC funded and non VC funded companies. Section 4 discusses the reasons behind the superior performance of VC companies. Two main ideas are explored in the academic perspective viz., whether the better performance can be attributed to better screening and selection of investment opportunities or because of managerial inputs and value addition provided by VCs after investment. Section 5 provides a summary and identifies some areas where more research is needed.