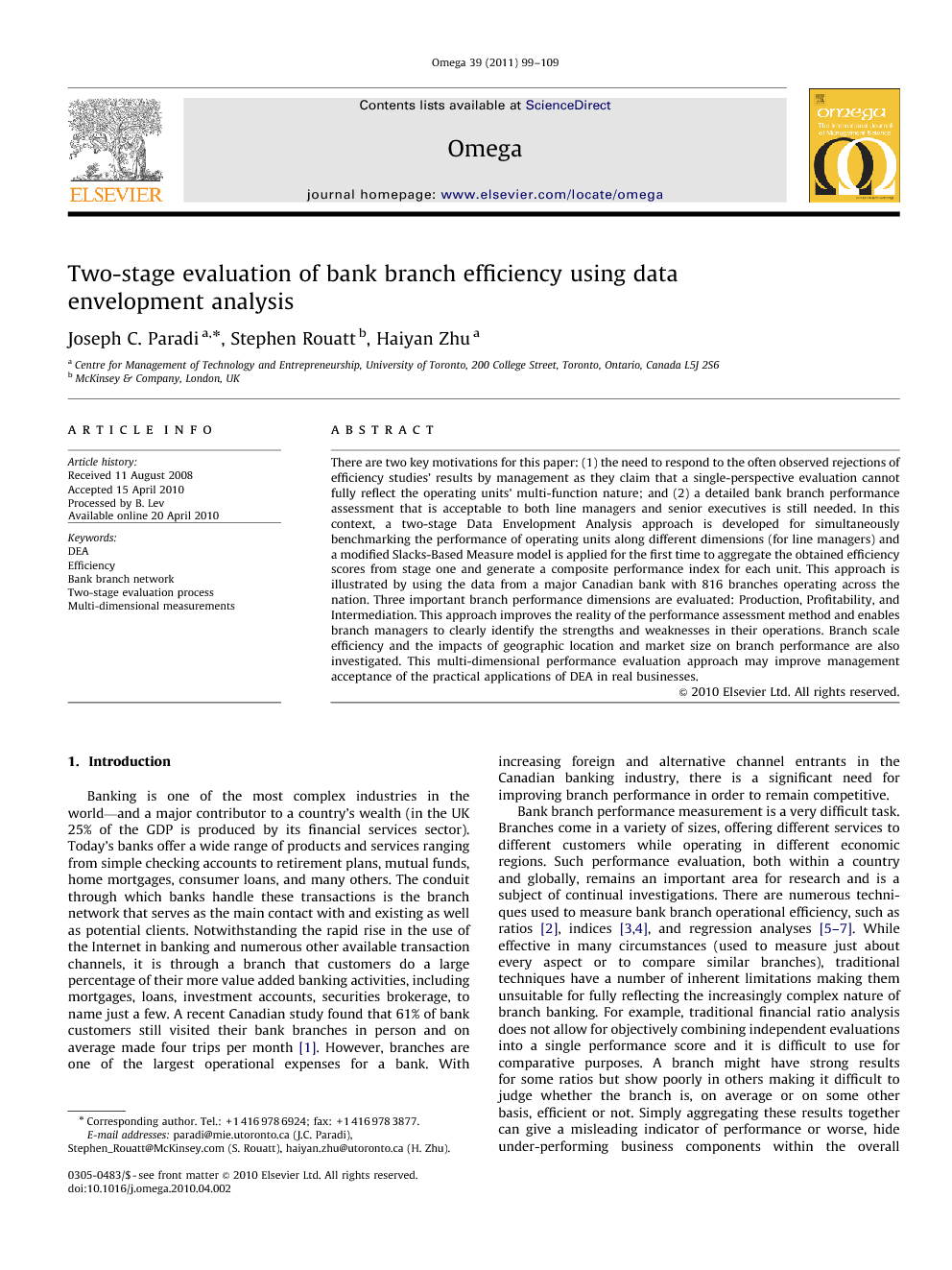 There are two key motivations for this paper: (1) the need to respond to the often observed rejections of efficiency studies’ results by management as they claim that a single-perspective evaluation cannot fully reflect the operating units’ multi-function nature; and (2) a detailed bank branch performance assessment that is acceptable to both line managers and senior executives is still needed. In this context, a two-stage Data Envelopment Analysis approach is developed for simultaneously benchmarking the performance of operating units along different dimensions (for line managers) and a modified Slacks-Based Measure model is applied for the first time to aggregate the obtained efficiency scores from stage one and generate a composite performance index for each unit. This approach is illustrated by using the data from a major Canadian bank with 816 branches operating across the nation. Three important branch performance dimensions are evaluated: Production, Profitability, and Intermediation. This approach improves the reality of the performance assessment method and enables branch managers to clearly identify the strengths and weaknesses in their operations. Branch scale efficiency and the impacts of geographic location and market size on branch performance are also investigated. This multi-dimensional performance evaluation approach may improve management acceptance of the practical applications of DEA in real businesses.

This paper presents a two-stage DEA analysis approach applied in a Canadian bank's national branch network to assess, in detail, the main source of branch inefficiency and meet the needs of Bank management at all levels. In the first stage 816 branches across three different market sizes and five different geographical regions are analyzed using both BCC and CCR input-oriented models from three dimensions—production (staffing), profitability, and intermediation (Lending). Comparing with previous branch studies, this three-dimensional efficiency analysis shows a significantly more comprehensive evaluation of bank branch performance that is also likely to be better accepted by branch level management. Results show that poor performance in one aspect does not predict similar poor results in the other two aspects. This suggests the possibility that branch managers could, and would, choose to focus on specific areas of performance likely due to their particular operating environments. But a significant effect is the willingness to accept the results as the managers are able to take some credit where they do well while acknowledge where they need improvements. Strong correlation between the results of the Profitability model and the Bank's current internal measures confirms the reliability of these DEA models from the bank's point of view. When the branches are split out by market size and geographic region, significant differences in performance are noted, and these correlate well with the actual economic climate in such regions. Scale efficiency analysis indicates that the majority of the branches operate at constant returns to scale and the scale inefficiency increases with branch size. DRS branches are found in all branch groups, implying that the branch size is not the only influential factor affecting the branch's scale efficiency, rationalization of the input combination is also needed for branches to reach their most productive scale sizes. Moreover, the relationship between the branches’ pure technical efficiency and asset size is non-linear. Small and Medium branches are more efficient in the Production and Profitability dimensions, X-Large branches exhibit the best in terms of Intermediation efficiency, while, the Large branch group is found exhibiting relatively lower levels of efficiency in all three dimensions. These results suggest that the efficiency gains from a strategy of mergers and acquisitions founded on potential cost cutting benefits may be offset by the increased operating complexity. The second stage in the study is accomplished by using a modified output-oriented SBM model that incorporates the efficiency scores of the three first-stage models as outputs with unity as input. This combined model produces the overall ranking for bank branches and it is a senior management oriented model first introduced here. The application of such comprehensive technique also aids in marketing the DEA approach inside the banking industry. This is a valuable opportunity to evaluate several different performance aspects of a significant number of branches from both a regional and a national perspective. Given the comprehensive database for a large set of branches that is made available from the Bank, there is still an excellent opportunity for further investigations in future.