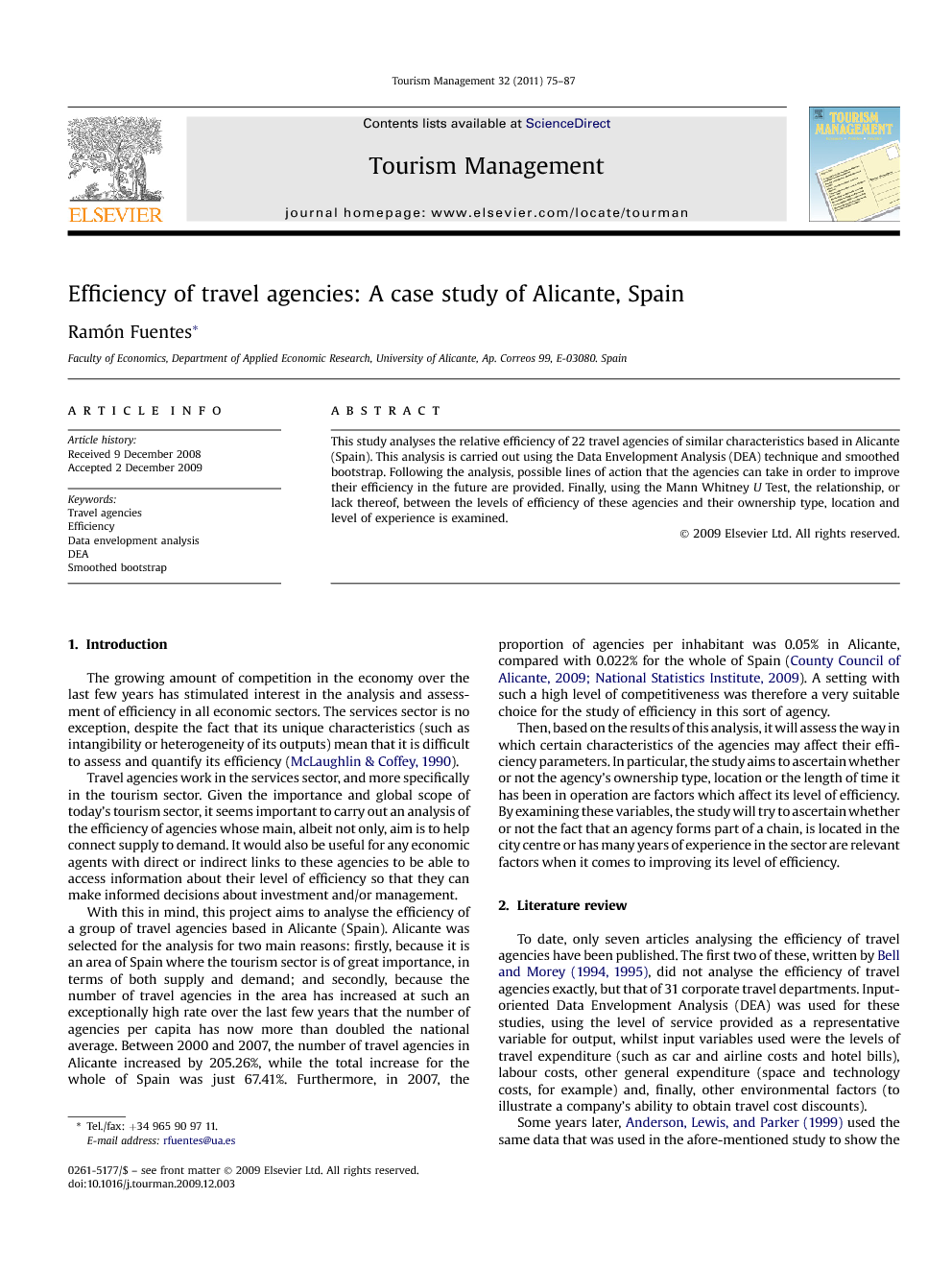 This study analyses the relative efficiency of 22 travel agencies of similar characteristics based in Alicante (Spain). This analysis is carried out using the Data Envelopment Analysis (DEA) technique and smoothed bootstrap. Following the analysis, possible lines of action that the agencies can take in order to improve their efficiency in the future are provided. Finally, using the Mann Whitney U Test, the relationship, or lack thereof, between the levels of efficiency of these agencies and their ownership type, location and level of experience is examined.

The growing amount of competition in the economy over the last few years has stimulated interest in the analysis and assessment of efficiency in all economic sectors. The services sector is no exception, despite the fact that its unique characteristics (such as intangibility or heterogeneity of its outputs) mean that it is difficult to assess and quantify its efficiency (McLaughlin & Coffey, 1990). Travel agencies work in the services sector, and more specifically in the tourism sector. Given the importance and global scope of today's tourism sector, it seems important to carry out an analysis of the efficiency of agencies whose main, albeit not only, aim is to help connect supply to demand. It would also be useful for any economic agents with direct or indirect links to these agencies to be able to access information about their level of efficiency so that they can make informed decisions about investment and/or management. With this in mind, this project aims to analyse the efficiency of a group of travel agencies based in Alicante (Spain). Alicante was selected for the analysis for two main reasons: firstly, because it is an area of Spain where the tourism sector is of great importance, in terms of both supply and demand; and secondly, because the number of travel agencies in the area has increased at such an exceptionally high rate over the last few years that the number of agencies per capita has now more than doubled the national average. Between 2000 and 2007, the number of travel agencies in Alicante increased by 205.26%, while the total increase for the whole of Spain was just 67.41%. Furthermore, in 2007, the proportion of agencies per inhabitant was 0.05% in Alicante, compared with 0.022% for the whole of Spain (County Council of Alicante, 2009 and National Statistics Institute, 2009). A setting with such a high level of competitiveness was therefore a very suitable choice for the study of efficiency in this sort of agency. Then, based on the results of this analysis, it will assess the way in which certain characteristics of the agencies may affect their efficiency parameters. In particular, the study aims to ascertain whether or not the agency's ownership type, location or the length of time it has been in operation are factors which affect its level of efficiency. By examining these variables, the study will try to ascertain whether or not the fact that an agency forms part of a chain, is located in the city centre or has many years of experience in the sector are relevant factors when it comes to improving its level of efficiency.