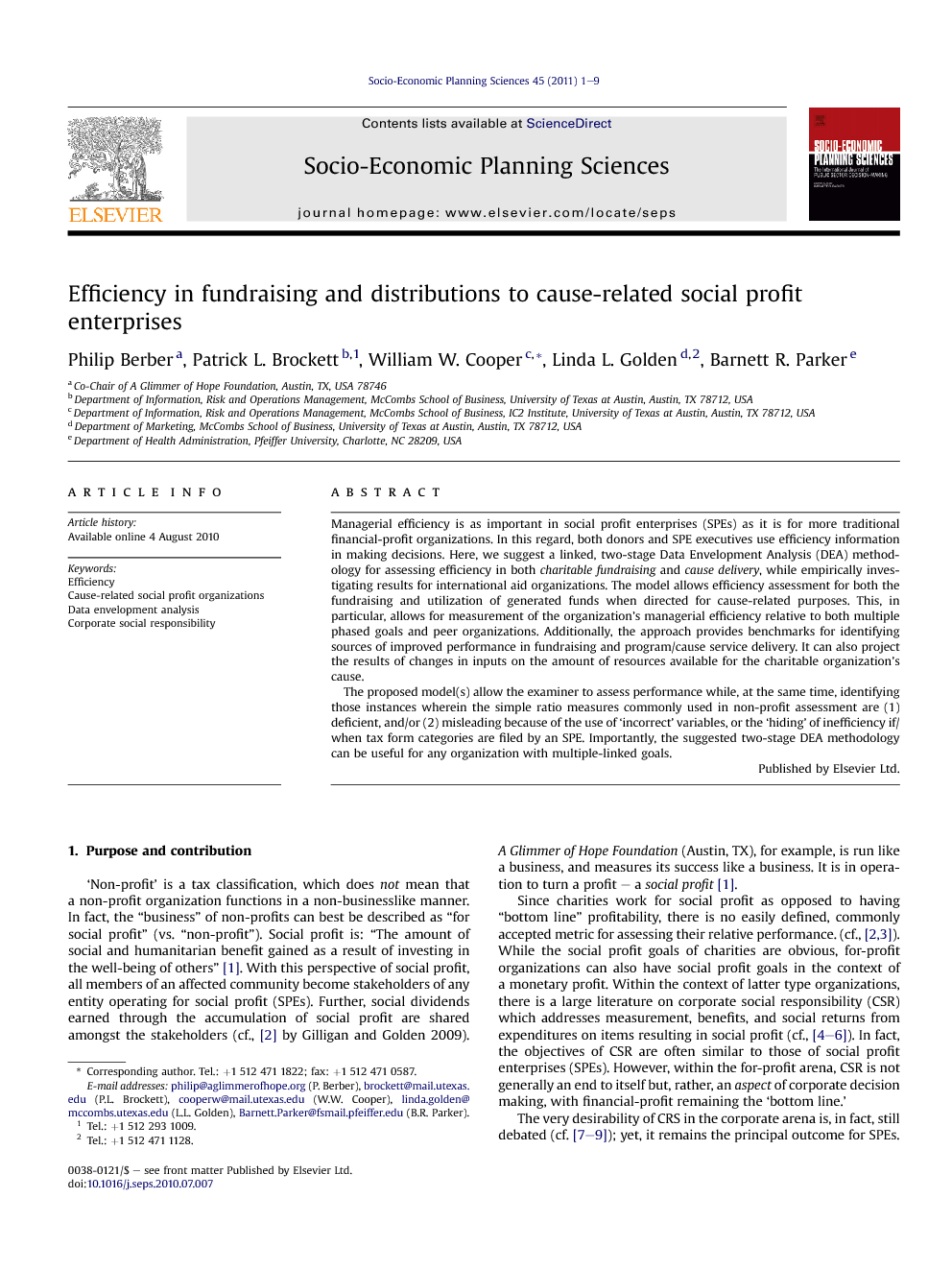 Managerial efficiency is as important in social profit enterprises (SPEs) as it is for more traditional financial-profit organizations. In this regard, both donors and SPE executives use efficiency information in making decisions. Here, we suggest a linked, two-stage Data Envelopment Analysis (DEA) methodology for assessing efficiency in both charitable fundraising and cause delivery, while empirically investigating results for international aid organizations. The model allows efficiency assessment for both the fundraising and utilization of generated funds when directed for cause-related purposes. This, in particular, allows for measurement of the organization’s managerial efficiency relative to both multiple phased goals and peer organizations. Additionally, the approach provides benchmarks for identifying sources of improved performance in fundraising and program/cause service delivery. It can also project the results of changes in inputs on the amount of resources available for the charitable organization’s cause. The proposed model(s) allow the examiner to assess performance while, at the same time, identifying those instances wherein the simple ratio measures commonly used in non-profit assessment are (1) deficient, and/or (2) misleading because of the use of ‘incorrect’ variables, or the ‘hiding’ of inefficiency if/when tax form categories are filed by an SPE. Importantly, the suggested two-stage DEA methodology can be useful for any organization with multiple-linked goals.

‘Non-profit’ is a tax classification, which does not mean that a non-profit organization functions in a non-businesslike manner. In fact, the “business” of non-profits can best be described as “for social profit” (vs. “non-profit”). Social profit is: “The amount of social and humanitarian benefit gained as a result of investing in the well-being of others” [1]. With this perspective of social profit, all members of an affected community become stakeholders of any entity operating for social profit (SPEs). Further, social dividends earned through the accumulation of social profit are shared amongst the stakeholders (cf., [2] by Gilligan and Golden 2009). A Glimmer of Hope Foundation (Austin, TX), for example, is run like a business, and measures its success like a business. It is in operation to turn a profit – a social profit[1]. Since charities work for social profit as opposed to having “bottom line” profitability, there is no easily defined, commonly accepted metric for assessing their relative performance. (cf., [2] and [3]). While the social profit goals of charities are obvious, for-profit organizations can also have social profit goals in the context of a monetary profit. Within the context of latter type organizations, there is a large literature on corporate social responsibility (CSR) which addresses measurement, benefits, and social returns from expenditures on items resulting in social profit (cf., [4], [5] and [6]). In fact, the objectives of CSR are often similar to those of social profit enterprises (SPEs). However, within the for-profit arena, CSR is not generally an end to itself but, rather, an aspect of corporate decision making, with financial-profit remaining the ‘bottom line.’ The very desirability of CRS in the corporate arena is, in fact, still debated (cf. [7], [8] and [9]); yet, it remains the principal outcome for SPEs. Maignan and Ferrell [10] present an excellent discussion of the marketing research underlying CSR, and, while the research is diverse, successful management of CSR activities can result in benefits to the enterprise; in particular, producing a social profit for the for-profit enterprise. There is significant literature on charity rating systems that look at the “efficiency” of operations (e.g., [11], [12], [13], [14], [15] and [16]). There is even a “rating of charity raters” [17]. At the same time, however, there are criticisms of these systems (cf., [3], [17] and [18]). To date, no uniformly rigorous method has been presented for assessing the degree of managerial efficiency in charitable SPEs. Many potential donors thus simply compare the amount of raised funds allocated to non-administrative costs to determine the degree to which their donation(s) actually help the cause. This “administrative cost heuristic” is a widespread decision rule used by consumers to allocate contributions across non-profit organizations. While the stated goal of not-for-profit organizations is to generate revenues for their “causes,” they vary in the “efficiency” of fundraising, and in effectively funneling raised resources toward their stated causes [19] and [20]. A charity may, in fact, be an efficient fundraiser without effectively directing resources to the causes it serves, or vice versa. Existing rating systems aggregate fundraising with the delivery of services, thus confounding the efficiency of two distinct functions. Inefficiency in fundraising could very easily dominate that of cause delivery, making a charity’s “good work with donated funds” difficult, if not impossible to judge. We offer a rigorous analysis of charitable efficiency based on a two-stage Data Envelopment Analysis (DEA) model yielding useful information for donors as well as SPEs as both a performance metric and benchmarking vehicle. The methodology allows an SPE to separately focus on different efficiencies (fundraising and service delivery), which are generally critical goals for such organizations.

It has become widely recognized that efficiency of operations is as important for non-profit firms as it is for their for-profit counterparts. Nevertheless, both non-profit practitioners and academic researchers have largely neglected to investigate the relative efficiency of fundraising vs. program delivery activities in not-for-profits. We thus introduced the term “Social Profit Enterprises” (SPE) for parsimonious terminology, and to reflect the fact that ‘non-profit’ or ‘charity’ may be misleading in describing the goals of such entities [3]. By separating fundraising efficiency from that of program delivery, and subsequently creating a two-stage linked DEA model, this research provides the SPE more powerful information for improving functioning and performance. A significant finding was that SPEs can hide expenses in the accounting details of services provided; and, when these are removed, the result can be inefficiency uncovered. Additionally, by separating the two efficiencies, one can observe where an SPE excels and where it lags, with inefficient SPEs then able to better determine benchmark SPEs and potential partners. Many poor performers remain ‘in business’ to this day, since, in part, such efficiency information is relatively hard to obtain. Further, IRS Form 990 creates a motivation for charities to hide cost in their service provision lines, and thus appear more efficient to potential donors than is actually the case. By removing the extra expenses in service provision (output), we have shown how the proposed approach can provide a more valid view of SPE efficiency. As suggested above, the methodology can provide new information, as well. Charity Navigator, for example, only rates those charities with more than $500,000 in public contributions and $1,000,000 in annual revenue. The efficiency of smaller charities is thus not readily apparent, or even obtainable, to potential donors. The current research provides the IRS and potential donors with a tool for discovering such “hiding cost” problems while the benchmarking information can help direct non-profits toward greater efficiency. Finally, we should note that all charities rated by us as ‘fully efficiency’ by all models were also given the highest ‘four star’ rating on efficiency by Charity Navigator (Big Brothers & Sisters Foundation, Children’s Hunger Fund, Citihope International, Inc., and American Nicaraguan Foundation, Inc.). American Foundation, Inc. (AFI), which was also rated fully efficient by our methodology, was not rated by Charity Navigator. This is the case since AFI actually helps diverse groups and individuals set up their own family or charitable foundations. It is thus not a pure charity in the sense of delivering services to an end cause. Further, it does not generate in excess of $500,000 in public donations. Thus, with respect to the largest group of SPEs in the U.S., our results appear to have real-world validity.