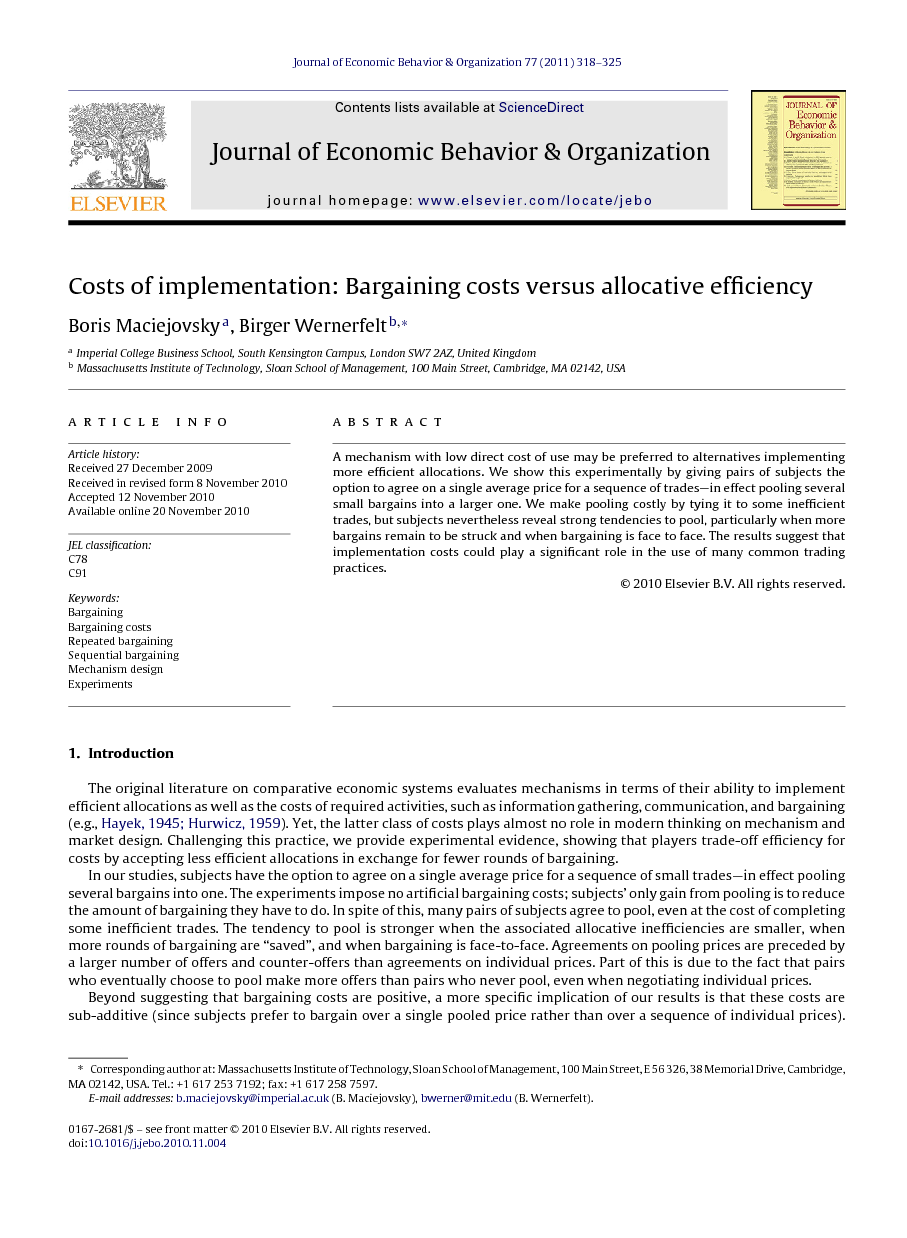 A mechanism with low direct cost of use may be preferred to alternatives implementing more efficient allocations. We show this experimentally by giving pairs of subjects the option to agree on a single average price for a sequence of trades—in effect pooling several small bargains into a larger one. We make pooling costly by tying it to some inefficient trades, but subjects nevertheless reveal strong tendencies to pool, particularly when more bargains remain to be struck and when bargaining is face to face. The results suggest that implementation costs could play a significant role in the use of many common trading practices.

The original literature on comparative economic systems evaluates mechanisms in terms of their ability to implement efficient allocations as well as the costs of required activities, such as information gathering, communication, and bargaining (e.g., Hayek, 1945 and Hurwicz, 1959). Yet, the latter class of costs plays almost no role in modern thinking on mechanism and market design. Challenging this practice, we provide experimental evidence, showing that players trade-off efficiency for costs by accepting less efficient allocations in exchange for fewer rounds of bargaining. In our studies, subjects have the option to agree on a single average price for a sequence of small trades—in effect pooling several bargains into one. The experiments impose no artificial bargaining costs; subjects’ only gain from pooling is to reduce the amount of bargaining they have to do. In spite of this, many pairs of subjects agree to pool, even at the cost of completing some inefficient trades. The tendency to pool is stronger when the associated allocative inefficiencies are smaller, when more rounds of bargaining are “saved”, and when bargaining is face-to-face. Agreements on pooling prices are preceded by a larger number of offers and counter-offers than agreements on individual prices. Part of this is due to the fact that pairs who eventually choose to pool make more offers than pairs who never pool, even when negotiating individual prices. Beyond suggesting that bargaining costs are positive, a more specific implication of our results is that these costs are sub-additive (since subjects prefer to bargain over a single pooled price rather than over a sequence of individual prices). Sub-additivity has strong intuitive appeal and is consistent with the sense that most people would prefer to negotiate a single $300 deal instead of thirty $10 deals. Sub-additive bargaining costs are to bargaining what menu costs (Levy et al., 1997, Mankiw, 1985 and Zbaracki et al., 2004) are to posted prices: they can help us explain incomplete price-adjustment. While this phenomenon has been largely ignored by economists, the US Supreme Court has defended it as rational responses to sub-additive pricing costs (Broadcast Music Inc. vs. Columbia Broadcast System, 1978). The American Society of Composers, Authors and Publishers, which license the work of individual artists in the music industry, charges a blanket fee to bars, radio stations, etc. When the Columbia Broadcast System challenged this practice, the court found in favor of the defendant, arguing “…a blanket license was an obvious necessity if the thousands of individual negotiations, a virtual impossibility, were to be avoided”. Wernerfelt (1997) used similar arguments to explain the absence of ongoing bargaining between employees and their bosses. Our experiments speak directly to this by testing the extent to which subjects are willing to forego surplus in order to avoid ongoing bargaining.1 The remainder of the paper is organized as follows: we present a reduced form model in Section 2, the experimental design in Section 3, and the results in Section 4. The paper closes with a brief discussion in Section 5. The experimental instructions can be found in Appendix B along with a possible micro-foundation for the model and some more detailed data.

In the tradition of Coase (1937), we have identified a cost of using the price mechanism and have shown how it can lead subjects to agree on average rather than individual prices when the items traded are many, small, and idiosyncratic. Consistent with theoretical expectation, we found that pooling is more likely when more bargains remain to be struck, when the stakes per deal are lower, when the costs resulting from inefficient trades are lower, and when the bargainers come face to face. The underlying bargaining costs, and the extent to which they are sub-additive, were not created by the experimenters. They were driven by naturally felt costs of the subjects themselves. Since our study is the first attempt to look at the behavior of bargaining costs, it leaves many questions unanswered. For example, what happens if we vary the extent to which the individual trades are idiosyncratic? If the thirty trades consist of ten times three (cost, value) pairs, might the players negotiate a price for each when it first appears and then use this as a price list on all future occurrences? Another possibility is to expand on the idea from the face-to-face treatment and compare the magnitudes of bargaining costs in different settings. It would be particularly interesting to replicate the results in a country with extensive retail bargaining. It is easiest to make a case for bargaining costs in the context of the folk theorem—when more than one mechanism can implement the first best allocation and many rounds of bargaining are called for. However, since subjects gave up some allocative efficiency in return for less bargaining, our experiments suggest that bargaining costs can matter in a much wider range of circumstances. If this is true, our results have important implications for institutional comparisons and market design.