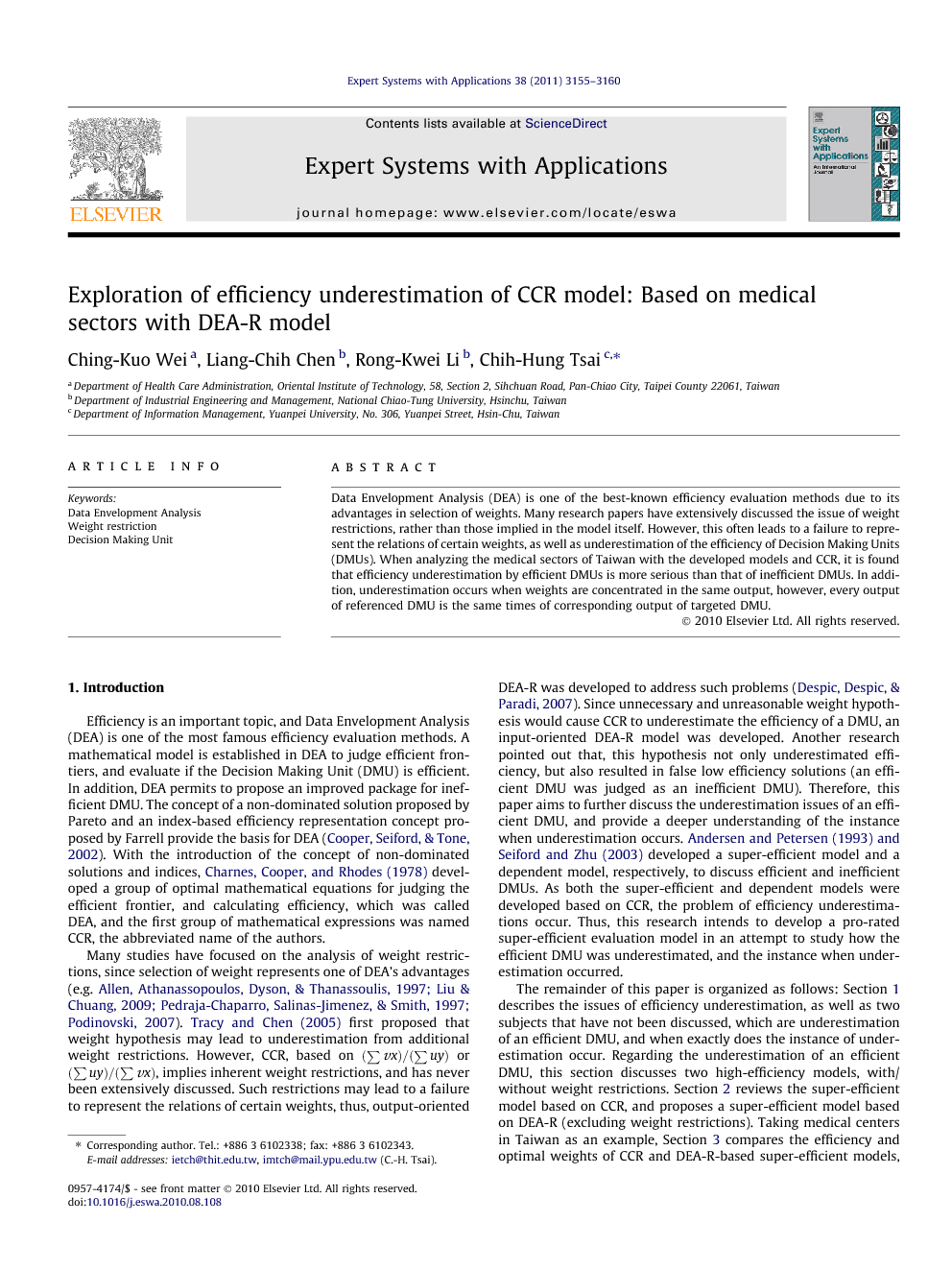 Data Envelopment Analysis (DEA) is one of the best-known efficiency evaluation methods due to its advantages in selection of weights. Many research papers have extensively discussed the issue of weight restrictions, rather than those implied in the model itself. However, this often leads to a failure to represent the relations of certain weights, as well as underestimation of the efficiency of Decision Making Units (DMUs). When analyzing the medical sectors of Taiwan with the developed models and CCR, it is found that efficiency underestimation by efficient DMUs is more serious than that of inefficient DMUs. In addition, underestimation occurs when weights are concentrated in the same output, however, every output of referenced DMU is the same times of corresponding output of targeted DMU.

Based on past studies on underestimation, this paper suggests that the CCR-based model has occasional underestimations when evaluating high efficiency DMUs, and thus, proposes to use Super-DEA to discuss the underestimation problems of DMUs. There are four main findings: (1) in this case, since the underestimation problem of a high efficiency DMU is more serious than that in the low efficiency DMU, this model is necessary; (2) based on the comparison and analysis of optimal weights, it is known that the number of weights is less, and the unreasonable weight limitation assumption leads to underestimations in efficiency when using (∑vx)/(∑uy)(∑vx)/(∑uy) or (∑uy)/(∑vx)(∑uy)/(∑vx) as the base of the model; (3) to determine exactly when underestimation will occur, this study analyzes the DMU that was not underestimated from another perspective, and finds that when DEA-R-I weights are concentrated on one output, and DEA-R-I efficiency, θoθo, and CCR-I efficiency, View the MathML sourceθ¯o, are the same, there is no underestimation; (4) it is proven that when DEA-R-I weights are not concentrated on one output, DEA-R-I efficiency, θoθo, and CCR-I efficiency, View the MathML sourceθ¯o, are not the same; with the exception of every output of referenced DMU is the same times of corresponding output of the targeted DMU. Therefore, it is demonstrated that after executing DEA-R, whether CCR is underestimated can be determined. In other words, DEA-R not only can be used to replace CCR to evaluate efficiency, and thus, avoid underestimations and weight limits, but also to predict whether CCR underestimation would occur. The examples of special subsidies for further education in Taiwan, merger of DRAM factories, and evaluation of hospitals have demonstrated the practical value of this study. In the first example, the Taiwanese government, with the goal of assisting the colleges of universities to become top colleges recognized worldwide, proposed the Five-year Fifth Billion plan to fund the development or research facilities of colleges. However, since different colleges can excel in their own domains, the scope of subsidy may be too broad. Therefore, it is no longer necessary to discuss whether schools should possess a leading position in their respective domains, instead, the focus should be the magnitude of the achievements. Only by funding the colleges with the greatest magnitude could the colleges be further advanced. As a result, a more accurate model is needed to calculate the efficiency of DMUs. In the second example, due to the financial crisis and long-term fluctuation, the DRAM industry is facing serious obstacles. Thus, the government aims to integrate DRAM factories in order to reach an appropriate scale. However, almost all DRAM companies are experiencing losses. Thus, it is necessary to identify the strengths of each company and the leading magnitude in order to determine the main body of mergers. From another perspective, the government would assist inefficient companies to merge with efficient companies to improve efficiency. Similarly, in DMU 4, if the efficient DMU is underestimated as an inefficient DMU, it would cause the company to be merged. In such case, a more accurate model is needed to calculate the efficiency of DMU. Lastly, to effectively control the national health insurance budget, in addition to limiting the global budget, the government also plans to downgrade inefficient hospitals to reduce expenditures. If a hospital is indeed efficient, but determined as inefficient, it would be downgraded, causing serious problems for the hospital. After downgraded, the payment for each outpatient visit and hospitalization would be reduced, thus, the total revenue of the hospital would also be reduced. The hospital may need to downsize the staffs or increase the physicians’ working hours to maintain the total revenue. As a result, doctors would not have sufficient time for research, and the management strategies of the hospital may need to be drastically changed (transforming from a research and medical care institution to a sole medical care institution). As seen, accurate evaluations of DMU efficiency are very important in practice. This study developed a new DEA model based on Super-high and ratio concepts. This model not only can avoid underestimating the efficiency of efficient DMU, but can also be used to determine whether underestimation would occur. In the future, this model can be employed to evaluate efficiency and prevent problems caused by underestimation.