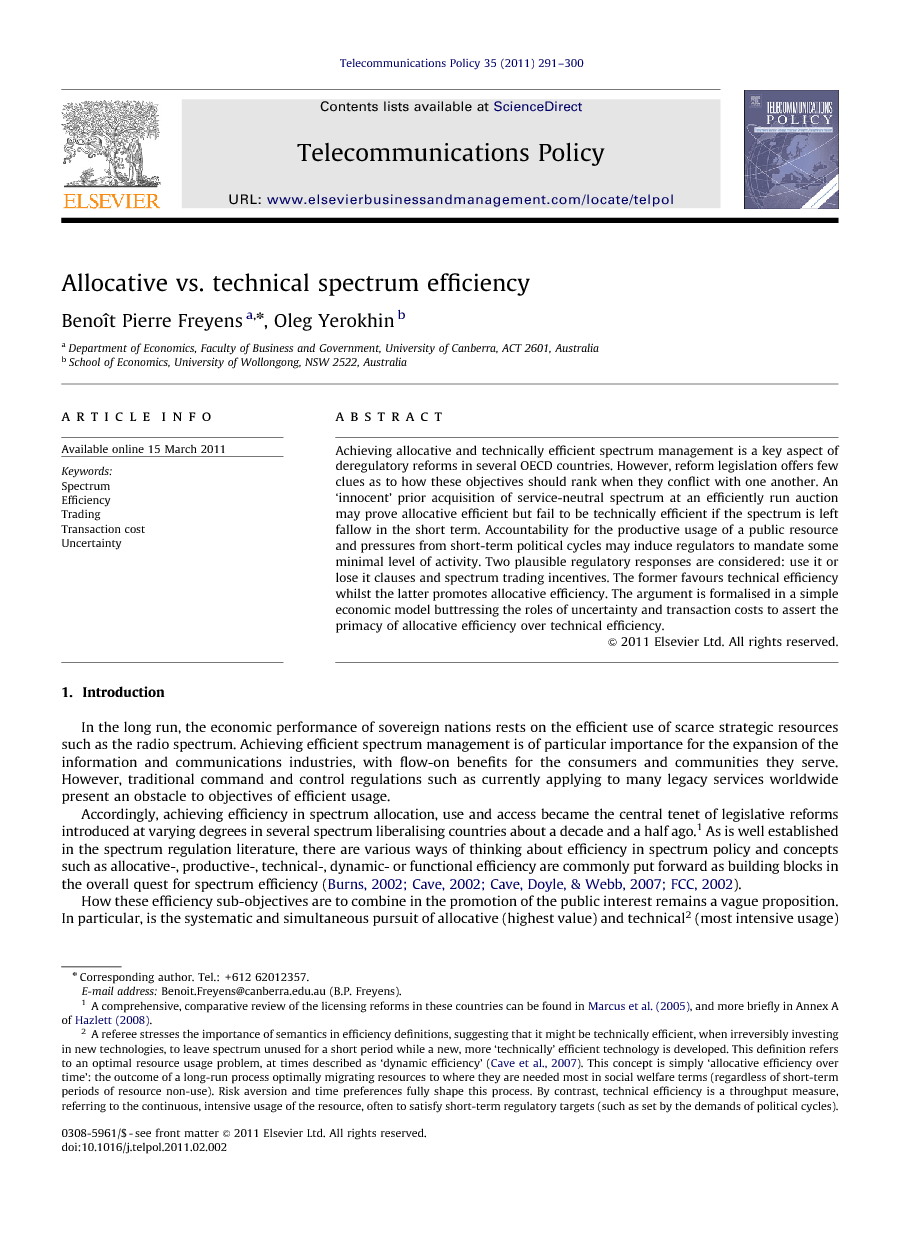 Achieving allocative and technically efficient spectrum management is a key aspect of deregulatory reforms in several OECD countries. However, reform legislation offers few clues as to how these objectives should rank when they conflict with one another. An ‘innocent’ prior acquisition of service-neutral spectrum at an efficiently run auction may prove allocative efficient but fail to be technically efficient if the spectrum is left fallow in the short term. Accountability for the productive usage of a public resource and pressures from short-term political cycles may induce regulators to mandate some minimal level of activity. Two plausible regulatory responses are considered: use it or lose it clauses and spectrum trading incentives. The former favours technical efficiency whilst the latter promotes allocative efficiency. The argument is formalised in a simple economic model buttressing the roles of uncertainty and transaction costs to assert the primacy of allocative efficiency over technical efficiency.

In the long run, the economic performance of sovereign nations rests on the efficient use of scarce strategic resources such as the radio spectrum. Achieving efficient spectrum management is of particular importance for the expansion of the information and communications industries, with flow-on benefits for the consumers and communities they serve. However, traditional command and control regulations such as currently applying to many legacy services worldwide present an obstacle to objectives of efficient usage. Accordingly, achieving efficiency in spectrum allocation, use and access became the central tenet of legislative reforms introduced at varying degrees in several spectrum liberalising countries about a decade and a half ago.1 As is well established in the spectrum regulation literature, there are various ways of thinking about efficiency in spectrum policy and concepts such as allocative-, productive-, technical-, dynamic- or functional efficiency are commonly put forward as building blocks in the overall quest for spectrum efficiency (Burns, 2002, Cave, 2002, Cave et al., 2007 and FCC, 2002). How these efficiency sub-objectives are to combine in the promotion of the public interest remains a vague proposition. In particular, is the systematic and simultaneous pursuit of allocative (highest value) and technical2 (most intensive usage) spectrum efficiency feasible? If the answer is yes, achieving these objectives will unambiguously contribute to the maximisation of an overall efficiency measure. Otherwise, if these distinct efficiency concepts mutually exclude each other, pursuing one of them will come at the expense of the other. This situation may lead to wasted opportunities and welfare loss if the socially weaker objective replaces the stronger one. As this article illustrates, regulators commonly encounter such intricate trade-offs between different efficiency objectives. With little objective criteria to guide their decisions, they have generally tried to steer a course between the requirements of legislated texts, and the interests of spectrum users and their consumers. This is problematic in many ways. Spectrum management reforms have created leasehold property rights regimes, such as auctioned and used in New Zealand (management rights), Australia (spectrum licences) and the United Kingdom (spectrum usage rights). When competitively auctioned, spectrum property rights provide ideal pathways to achieving allocative efficiency but they are not necessarily technically efficient, in the sense that the spectrum may remain largely unused. Therefore, property rights and auctions may help channel the spectrum to where it is valued most, but they offer no guarantee of efficient use (or any use at all). Conversely, administrative licensing arrangements that facilitate the productive use of a specific frequency band will usually not be allocative efficient because the deployed service or the adopted technology are typically prescribed with no regard for market forces. Hence, efficiency objectives can diverge significantly from one another in practice and the type of licensing regime adopted can itself be a source of divergence through the transaction costs they impose and the incentives they generate. With competing efficiency objectives, the quest for efficient spectrum policy presents daunting public interest dilemmas to regulatory agencies, and as will be discussed, spectrum law offers little guidance to help clarify these choices. This article aims to contribute to a clearer hierarchy of spectrum efficiency objectives. A first section stresses the lack of clear direction in legislated and regulatory texts in major spectrum liberalising countries (where the emphasis on spectrum efficiency objectives is highest). A second section illustrates the regulatory problems arising from this lack of direction through a practical example of conflicting efficiency objectives in Australia. A third section discusses two approaches used by regulators to resolve the conflict between allocative and technical efficiency: facilitating spectrum trading and inclusion of ‘use it or lose it’ clauses in the licensing contract. Finally, the paper presents an economic model, which sheds some light on the relative economic efficiency of these two approaches. The basic point is that, in general, ‘use it or lose it’ restrictions fall short of achieving efficient allocation of spectrum because they distort the dynamic investment decisions of market participants. This result highlights the crucial role of a well functioning secondary market for spectrum in achieving both allocative and technical efficiency in spectrum use.

This article started with two questions; what are the efficiency objectives of spectrum policy reforms and how should decision makers rank them when they conflict with one another? This study presented and analysed an example illustrating the trade-offs involved between different efficiency objectives. In an Australian context (but with clear implications for other reforming economies) this example showed that a property rights approach to spectrum governance may lead to allocative—but not productive-efficient solutions. This situation in turn makes life difficult for regulatory agencies, which are accountable to legislative authorities for efficient spectrum usage. There is no shortage of solutions to this problem: strip non-using owners of their exclusive rights under ‘use it or lose it’ clauses, or redefine property rights so that secondary users can access the spectrum when the primary user does not use it. Yet, economists would strongly disagree with any of these approaches. The apparent low usage of spectrum bands by some owners who paid a high price for the rights to use them can only make economic sense if one accounts for unobserved maximising behaviour. As the paper illustrates, owners of unused spectrum may very well maximise the expected value of their resource over a finite time horizon. By the very uncertain nature of multi-period profit optimisation, these decisions may fail to deliver the right outcomes to their owners ex post, but the decisions remain nonetheless optimal ex ante and perfectly coherent with rational expected behaviour on the part of firms/licensees. This argument was formalized in a model of a firm's decision-making in the presence of uncertainty about future payoffs and used this model to study the effects of use it or lose it clauses on firm's behaviour and social welfare. The main claim of the paper is that use it or lose it provisions will do little to alleviate inefficiencies in spectrum use if these inefficiencies are driven primarily by the presence of transaction costs in secondary markets, as appears to be the case in many situations. Therefore, the focus of regulatory policy should instead rest squarely on reducing these transaction costs and creating transparent secondary spectrum markets.