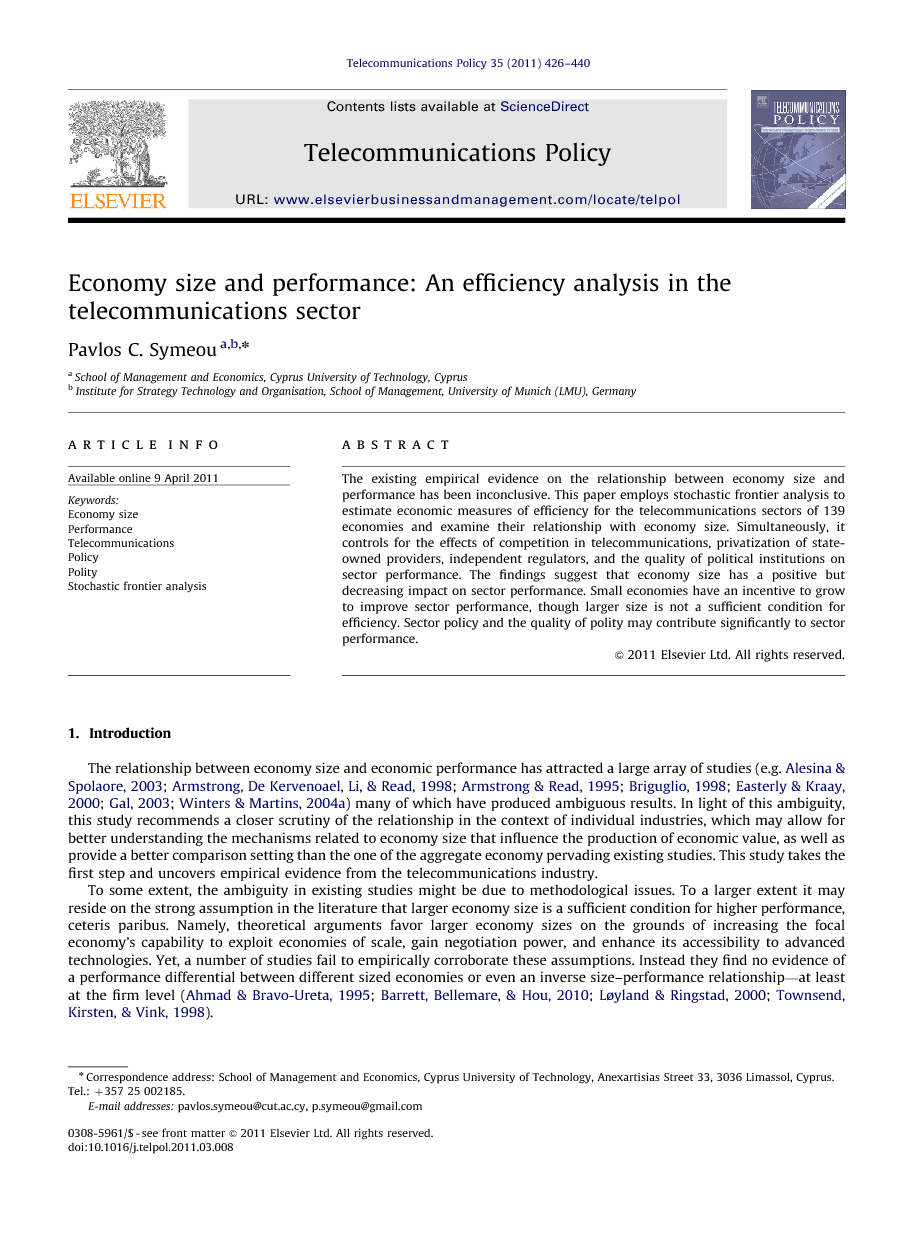 The existing empirical evidence on the relationship between economy size and performance has been inconclusive. This paper employs stochastic frontier analysis to estimate economic measures of efficiency for the telecommunications sectors of 139 economies and examine their relationship with economy size. Simultaneously, it controls for the effects of competition in telecommunications, privatization of state-owned providers, independent regulators, and the quality of political institutions on sector performance. The findings suggest that economy size has a positive but decreasing impact on sector performance. Small economies have an incentive to grow to improve sector performance, though larger size is not a sufficient condition for efficiency. Sector policy and the quality of polity may contribute significantly to sector performance.

The relationship between economy size and economic performance has attracted a large array of studies (e.g. Alesina and Spolaore, 2003, Armstrong et al., 1998, Armstrong and Read, 1995, Briguglio, 1998, Easterly and Kraay, 2000, Gal, 2003 and Winters and Martins, 2004a) many of which have produced ambiguous results. In light of this ambiguity, this study recommends a closer scrutiny of the relationship in the context of individual industries, which may allow for better understanding the mechanisms related to economy size that influence the production of economic value, as well as provide a better comparison setting than the one of the aggregate economy pervading existing studies. This study takes the first step and uncovers empirical evidence from the telecommunications industry. To some extent, the ambiguity in existing studies might be due to methodological issues. To a larger extent it may reside on the strong assumption in the literature that larger economy size is a sufficient condition for higher performance, ceteris paribus. Namely, theoretical arguments favor larger economy sizes on the grounds of increasing the focal economy's capability to exploit economies of scale, gain negotiation power, and enhance its accessibility to advanced technologies. Yet, a number of studies fail to empirically corroborate these assumptions. Instead they find no evidence of a performance differential between different sized economies or even an inverse size–performance relationship—at least at the firm level (Ahmad and Bravo-Ureta, 1995, Barrett et al., 2010, Løyland and Ringstad, 2000 and Townsend et al., 1998). A common explanation for this is that economies of size exist up to a certain range and disappear when diseconomies of scale emerge. Moreover, managerial problems of running larger firms may develop, which could counteract production and financial economies. Based on existing evidence this paper suggests that a continuously linear relationship between economy size and performance is unlikely. Instead, it proposes and examines a curvilinear relationship, which might be manifested in the initial capacity of larger economies to exploit increasing returns to scale up to a certain size that subsequently is counterbalanced by the emergence of governance problems. This study departs from existing empirical studies of the relationship between economy size and performance in various ways. First, unlike the neoclassical paradigm which assumes that economic units (e.g. the telecommunications industry in an economy) are always efficient, namely, they produce at the production possibility frontier (Bos, Economidou, Koetter, & Kolari, 2010), this study considers that, in reality, they may use the optimum technology with varying degrees of efficiency. It employs stochastic frontier analysis to derive measures of performance (efficiency) for the telecommunications industries of 139 economies over the period 1990–2004 and examine how economy size relates to these measures. Second, the analysis is contextualized in a service sector, telecommunications, which requires substantial sunk investments in specific assets and manifests strong economies of scale and scope. Due to the non-exportable nature of the sector's outputs, the market size required for reaching the minimum efficient scale of operation and minimizing its long term average costs is directly determined by the economy's size. Third, economy size is measured by constructing a size index accounting for human capital, economic resources, and natural resources. The use of a composite index allows for the avoidance of ex ante arbitrary size classifications whilst it considers most major factors involved in the creation of economic value (Alesina & Spolaore, 2003). The focal economy's size is estimated in relation to each other economy's size for every year of available observations, thus allowing for temporal variation in its size as well as in its relative relationship with other economies. Last, this paper controls for important factors identified in the literature on telecommunications policy, which might affect sector performance beyond economy size. The importance of telecommunications to an economy's growth and welfare (Röller and Waverman, 2001 and Thompson and Garbacz, 2007) is evidenced by intense regulatory guardianship. Correspondingly, sector performance is largely dependent on the breadth of policy and the quality of political institutions. The latter signifies the independence of the sector's regulatory authority to pursue appropriate policy without the risk of capture by politicians and the government's commitment to protect investors' interests. Therefore, along with economy size, the paper controls for the effects of competition in the markets of fixed and mobile telephony, the privatization of state-owned operators, the establishment of an independent regulatory authority in the sector, and the quality of political institutions. The findings shed light on the relationship between economy size and telecommunications performance as well as on important sector-specific policy issues. Empirical evidence suggests that economy size has a positive but declining relationship with the efficiency of the telecommunications sector. This implies that whilst smaller economies can have incentives to grow larger, larger size is not a sufficient condition for efficient operation in the sector. In parallel, the role of the examined telecommunications policies and the quality of local polity in the sector's performance and by extension in optimum policy formation is fundamental. The remainder of the paper is organized as follows. Section 2 reviews the literature on small economies and identifies existing evidence of the relationship between economy size and performance. Section 3 discusses the research methodology, model development, and data collection and Section 4 elaborates on the empirical results. The paper concludes with a section on concluding remarks.

This paper aimed to provide deeper insights into the relationship between economy size and performance by providing empirical evidence from the telecommunications sector. Based on the literature on small economies the paper proposed that economy size and telecommunications performance can exhibit a curvilinear relationship beyond a certain size. From the analysis, economy size appears to have a positive and declining relationship with telecommunications efficiency corroborating the paper's proposition. The relationship is stronger for smaller economy sizes and diminishes with larger economy sizes. As a result, smaller economies can have stronger incentives to develop policies aimed at increasing their size than larger ones for the marginal impact of economy size on telecommunications efficiency decreases with size. Whether a small economy will be capable of increasing its size is contingent on a number of factors. Small economies can develop high level structural openness driven by stronger export orientation as this is expected to critically influence their international competitiveness (Armstrong and Read, 1998a and Armstrong and Read, 1998b). According to Armstrong and Read (2003) many small economies attain impressive levels of economic performance due to their concentration on niche market manufacturing. In the current study, the economy's openness impact on telecommunications performance finds empirical support. Many telecommunications industries in the sample deviate significantly from the optimum frontier of their performance and on average they operate at near-constant returns to scale. Herein lies the role of technical progress in improving industry performance. In a technologically driven industry, the minor technical progress reported in this study suggests that the sample industries might be lacking suitable organizational and market structures and skilled human capital that are enablers of better use of available technology. Particularly for telecommunications industries in small economies, more effective use of technology is necessary for greater utilization of limited resources and the undermining of the importance of economies of scale in the sector. Evidence from this study suggests that larger economy size is not a sufficient condition for efficient operation. Rather, economies must additionally place weight on the advancement of the quality of their political institutions and the development of appropriate policies, which, for the telecommunications sector, are shown to be important. Higher quality of political institutions exhibited a positive effect on sector efficiency. The quality of local polity has previously been associated with a lower possibility of capture of the national regulatory authority by the incumbent and other industry agents (Henisz & Zelner, 2001). In addition, it alleviates the risk that the government's role of monitoring and regulating the sector will be misused through the expropriation of investors and redistribution of wealth for the sake of obtaining political credit (Andonova & Diaz-Serrano, 2009). In conjunction with the positive relationship identified in the analysis between privatization of the incumbent operator and sector efficiency, improvement of the quality of political institutions gains increasing importance. The role of the regulatory authority in developing appropriate policy and monitoring relevant markets becomes particularly critical based on evidence from the analysis that the joint effect of focal policies on telecommunications efficiency is greater than their independent effect. Whilst, in itself, the independent national regulatory authority reinforces the sector's efficiency, its effects are highly contingent on its ability to orchestrate demanding policies (Symeou, 2009), such as the transition from monopoly to competition and the privatization of state-owned operators. Particularly for small economies, the literature has found that the local regulatory authorities often operate under sub-optimal specialized personnel and lack the technical competence to carry out those tasks (Stern, 2000). Consequently, effective administration of policy by regulatory authorities in small economies can be disproportionately costly compared to larger economies. To address these limitations, regulatory authorities in small economies may invest in the education and training of domestic human capital and seek assistance from and collaboration with authorities in larger economies. As much as the paper sought to elucidate the distinctive attributes of economy size that may impact economic performance, its empirical findings are industry-specific and should be treated with caution. The paper's purpose was to delve into the issue in the context of telecommunications and provoke further empirical work in other major industries that jointly can shed some light on the ambiguity that pervades existing research. It provides the theoretical foundations and propositions of the likely effects of economy size on performance on which future studies can build. An enabling factor in the compilation of empirical evidence is that the majority of the theoretical arguments about the economics and politics of policy reform in the telecommunications sector apply to other infrastructure industries, such as electricity and transportation (Noll, 1999).