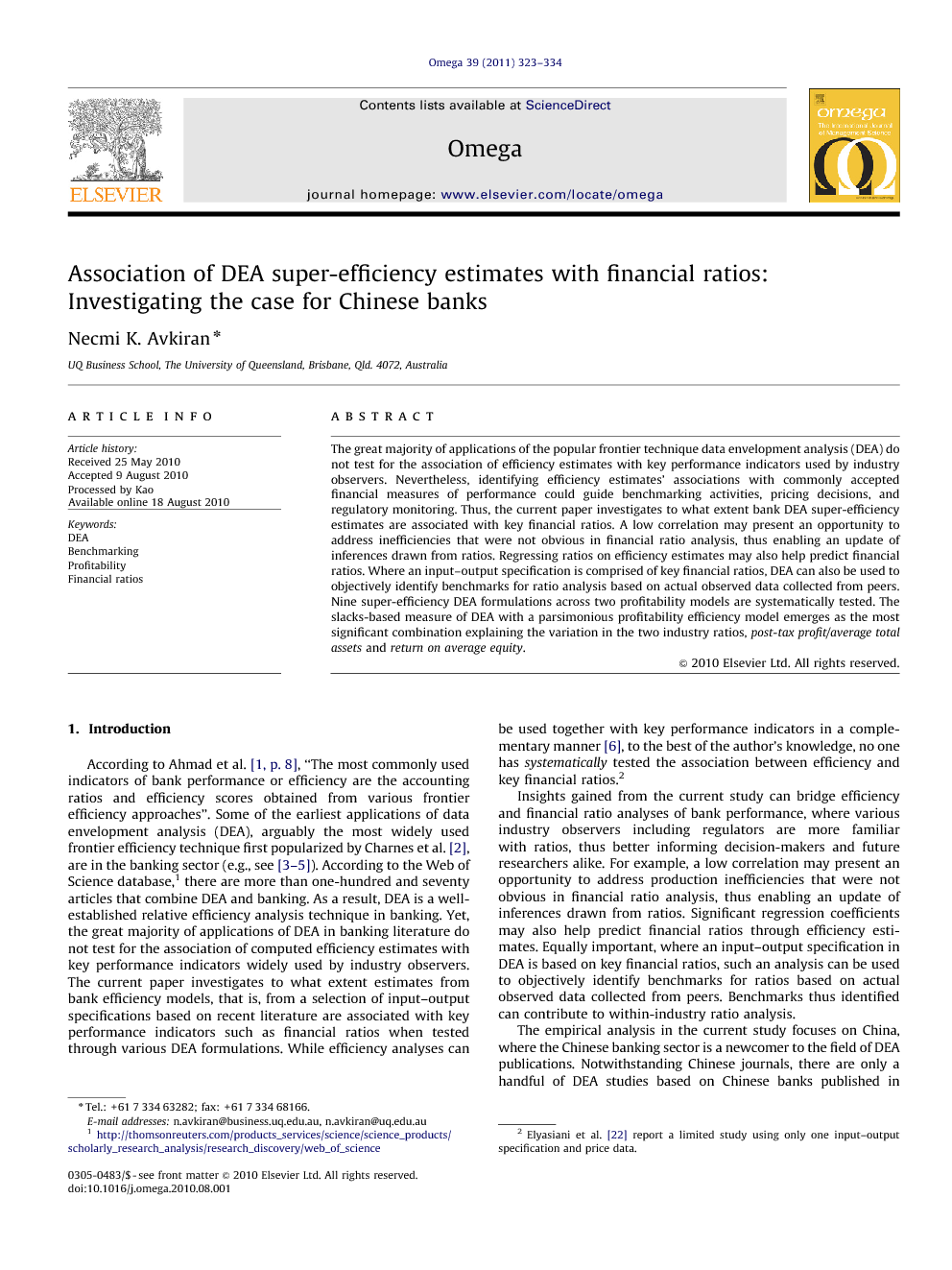 The great majority of applications of the popular frontier technique data envelopment analysis (DEA) do not test for the association of efficiency estimates with key performance indicators used by industry observers. Nevertheless, identifying efficiency estimates’ associations with commonly accepted financial measures of performance could guide benchmarking activities, pricing decisions, and regulatory monitoring. Thus, the current paper investigates to what extent bank DEA super-efficiency estimates are associated with key financial ratios. A low correlation may present an opportunity to address inefficiencies that were not obvious in financial ratio analysis, thus enabling an update of inferences drawn from ratios. Regressing ratios on efficiency estimates may also help predict financial ratios. Where an input–output specification is comprised of key financial ratios, DEA can also be used to objectively identify benchmarks for ratio analysis based on actual observed data collected from peers. Nine super-efficiency DEA formulations across two profitability models are systematically tested. The slacks-based measure of DEA with a parsimonious profitability efficiency model emerges as the most significant combination explaining the variation in the two industry ratios, post-tax profit/average total assets and return on average equity.

According to Ahmad et al. [1, p. 8], “The most commonly used indicators of bank performance or efficiency are the accounting ratios and efficiency scores obtained from various frontier efficiency approaches”. Some of the earliest applications of data envelopment analysis (DEA), arguably the most widely used frontier efficiency technique first popularized by Charnes et al. [2], are in the banking sector (e.g., see [3], [4] and [5]). According to the Web of Science database,1 there are more than one-hundred and seventy articles that combine DEA and banking. As a result, DEA is a well-established relative efficiency analysis technique in banking. Yet, the great majority of applications of DEA in banking literature do not test for the association of computed efficiency estimates with key performance indicators widely used by industry observers. The current paper investigates to what extent estimates from bank efficiency models, that is, from a selection of input–output specifications based on recent literature are associated with key performance indicators such as financial ratios when tested through various DEA formulations. While efficiency analyses can be used together with key performance indicators in a complementary manner [6], to the best of the author’s knowledge, no one has systematically tested the association between efficiency and key financial ratios.2 Insights gained from the current study can bridge efficiency and financial ratio analyses of bank performance, where various industry observers including regulators are more familiar with ratios, thus better informing decision-makers and future researchers alike. For example, a low correlation may present an opportunity to address production inefficiencies that were not obvious in financial ratio analysis, thus enabling an update of inferences drawn from ratios. Significant regression coefficients may also help predict financial ratios through efficiency estimates. Equally important, where an input–output specification in DEA is based on key financial ratios, such an analysis can be used to objectively identify benchmarks for ratios based on actual observed data collected from peers. Benchmarks thus identified can contribute to within-industry ratio analysis. The empirical analysis in the current study focuses on China, where the Chinese banking sector is a newcomer to the field of DEA publications. Notwithstanding Chinese journals, there are only a handful of DEA studies based on Chinese banks published in international journals (see [7], [8], [9], [10] and [11]). Furthermore, as a result of the ongoing deregulation which gained momentum since China joined the World Trade Organization in 2001, Chinese banks are currently offering a wider range of products and services.3 There is also a substantial effort by foreign banks locally incorporating, as well as major domestic banks listing on stock exchanges. As a result, the ongoing liberalization of the Chinese banking sector is attracting the interest of researchers in what may well be recorded in history as the main economy to have led the world out of the recent global financial crisis (GFC). According to Laurenceson and Qin [10, p. 59], “The need for China’s banks to improve their efficiency is mounting now that they are operating in an increasingly competitive and liberalized banking environment.” Therefore, this is a particularly appropriate point in time to pause and critically reflect on existing multivariate relative efficiency modeling that uses the popular frontier technique of DEA. As Chinese banks come under increasing scrutiny by the international banking and investment community, as well as their domestic capital markets, identifying efficiency estimates’ associations with commonly accepted financial measures of performance could guide benchmarking activities, pricing decisions and regulatory monitoring. Findings of the current study indicate mostly low correlations, suggesting an inadequacy in ratios’ ability to represent multivariate production inefficiencies. Nevertheless, the ratios of post-tax profits to average total assets and return on average equity are significantly associated with efficiency estimates, where the former ratio has the stronger relationship. Findings also indicate poor credit quality with Chinese banks. The non-radial DEA formulation that has gained popularity in recent times, namely, super-efficiency slacks-based measure, dominates all other formulations in terms of generating estimates that are correlated with ratios. The paper also illustrates how DEA can be used to address the long-recognized problem of objectively selecting financial ratio benchmarks. The remainder of the paper is organized as follows. Section 2 begins with an introduction to DEA, followed by an exposition of the conceptual framework built around the paper’s motivation and anticipated associations between ratios and relative profit efficiency. Methodology is detailed in Section 3 with explanations of input–output specifications and data used. Section 4 discusses the findings from various empirical tests, while Section 5 offers some concluding remarks.

This study is motivated by the disparate measurement of bank performance through efficiency estimates often found in academic publications versus financial ratios frequently used by industry. Part of the motivation includes a desire to find synergies between these different approaches to performance measurement. With this in mind, the author sets out to explore the associations between efficiency estimates based on the non-parametric frontier technique DEA and key bank performance ratios. Resulting correlations are generally low, suggesting an inadequate representation of production inefficiencies in ratio analysis. However, two profitability ratios, namely, post-tax profits to average total assets, and return on average equity, emerge as significant in their association with efficiency estimates, with the former ratio exhibiting a stronger relationship. This finding raises the potential to use efficiency estimates to predict certain key financial ratios’ future values. The non-radial DEA formulation SSBM-C-I dominates all other formulations in terms of generating estimates that are correlated with ratios, and the core profitability model with its parsimonious two inputs and two outputs provides discriminating estimates. The paper also demonstrates how DEA can be used to address the problem of objectively selecting ratio benchmarks for a group of firms. Such ratio benchmarks can be used for firm-level benchmarking, regulatory scrutiny, and stock pricing. Finally, results also point to poor credit quality with Chinese banks for 2007–2008. China is, once again, one of the fastest growing economies. As its domestic markets become more sophisticated and new infrastructure projects come on line, the rising economic activity is going to spur the Chinese banking sector. While China catches up with developed countries, its banks will offer more sophisticated products and services to their clients. As a result, this increasingly competitive and liberalized business environment will focus attention of managers on identifying inefficiencies as profit margins become tighter. Investigations such as the analysis illustrated in this study are likely to become commonplace over the next five years, particularly as China would probably have taken over from Japan as the second largest economy in the world by the time this article is read. Frontier efficiency analysis of banks through such techniques as DEA can guide governments on deregulation and market structure, help market analysts in pricing decisions, and improve managerial performance by separating the best from the worst performers. The partial performance ratios often found in the industry, while informative, cannot generate the broad comparisons delivered by DEA because they lack simultaneous optimization on multiple variables (see [44]). The vexed question of optimal capital adequacy ratio merits further comment. One cannot help but wonder whether the most recent global financial crisis would have turned out differently had the bankers and their regulators paid more attention to some of the comments by, say, Miller [51]. According to Miller, as per M&M Proposition II, expected earnings per share would normally rise in response to leveraging but would fall short of fully compensating for additional risk that accompanies leverage. The Basel III Accord negotiations aimed at preventing a repeat of the 2007–2009 GFC may well yield an agreement by the time this article appears in print. Yet, at the time of drafting the paper, there appears to be a significant gap between regulatory authorities inclined to implement harsh capital adequacy requirements and banks understandably concerned about stifling business. As Miller pointed out fifteen years ago, one-size-fits-all approach to regulation cannot be a substitute for the fine adjustments that can be achieved via private deals made in the marketplace. Even when the hardship of the recent GFC is still fresh in our minds, there is little reason to think that capital requirements will continue to be anything other than a source of dispute between bankers and regulators. Follow up to the current study may include testing the efficiency of Chinese banks on a frontier comprised of banks from other East Asian countries. Those Chinese banks that emerge as efficient on a national frontier may not perform as well when pitched against banks operating in other countries. For example, Sathye [23], who reports a data envelopment analysis of banks in the Asia-Pacific region, suggests that banks efficient at the national level may not be so in a cross-country analysis. The methodology illustrated in the context of banking can also be extended to other industries. It would be interesting to see if the same DEA formulations would dominate the results, thus testing the generalizability of the findings.