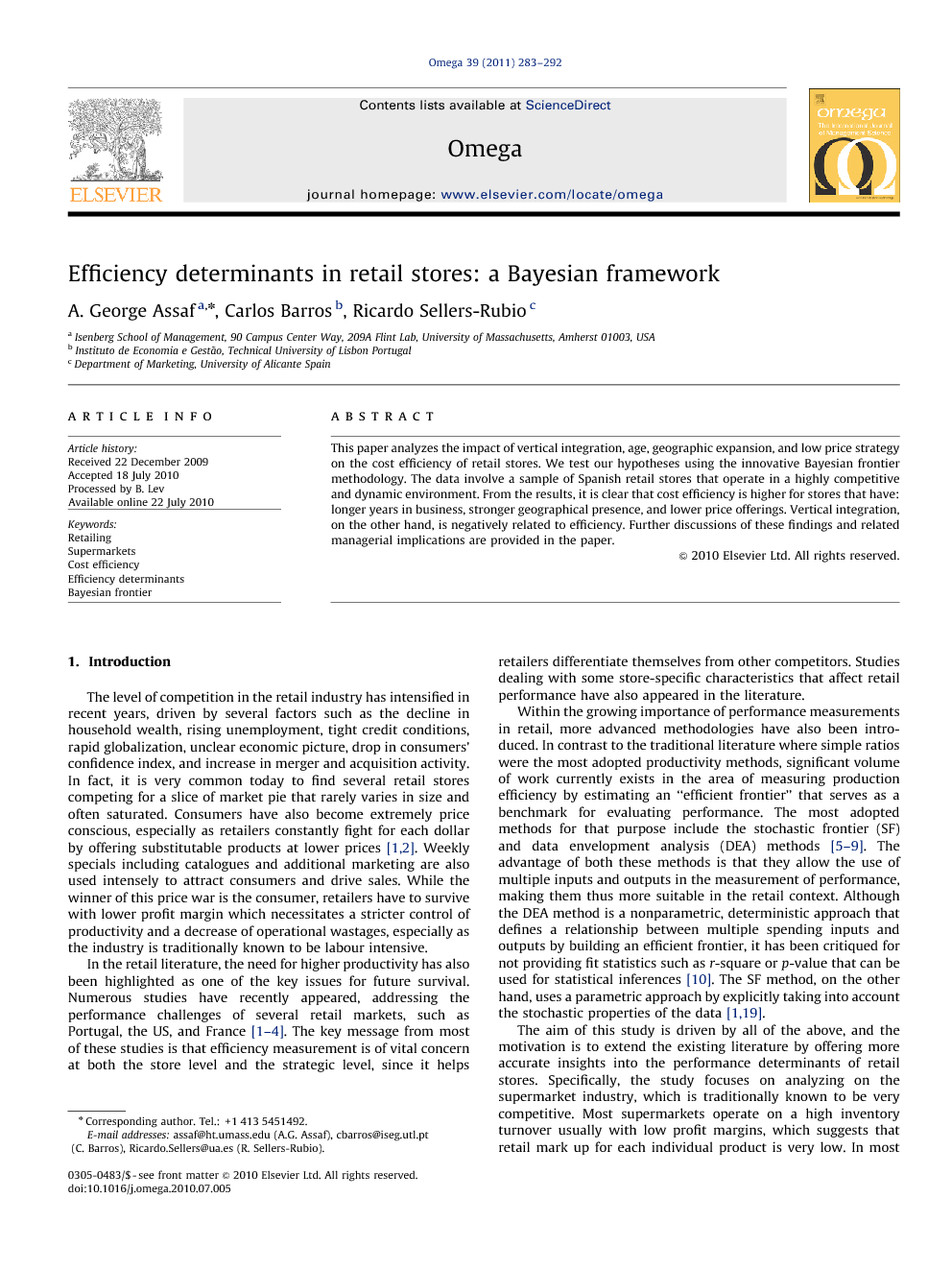 This paper analyzes the impact of vertical integration, age, geographic expansion, and low price strategy on the cost efficiency of retail stores. We test our hypotheses using the innovative Bayesian frontier methodology. The data involve a sample of Spanish retail stores that operate in a highly competitive and dynamic environment. From the results, it is clear that cost efficiency is higher for stores that have: longer years in business, stronger geographical presence, and lower price offerings. Vertical integration, on the other hand, is negatively related to efficiency. Further discussions of these findings and related managerial implications are provided in the paper.

The level of competition in the retail industry has intensified in recent years, driven by several factors such as the decline in household wealth, rising unemployment, tight credit conditions, rapid globalization, unclear economic picture, drop in consumers’ confidence index, and increase in merger and acquisition activity. In fact, it is very common today to find several retail stores competing for a slice of market pie that rarely varies in size and often saturated. Consumers have also become extremely price conscious, especially as retailers constantly fight for each dollar by offering substitutable products at lower prices [1] and [2]. Weekly specials including catalogues and additional marketing are also used intensely to attract consumers and drive sales. While the winner of this price war is the consumer, retailers have to survive with lower profit margin which necessitates a stricter control of productivity and a decrease of operational wastages, especially as the industry is traditionally known to be labour intensive. In the retail literature, the need for higher productivity has also been highlighted as one of the key issues for future survival. Numerous studies have recently appeared, addressing the performance challenges of several retail markets, such as Portugal, the US, and France [1], [2], [3] and [4]. The key message from most of these studies is that efficiency measurement is of vital concern at both the store level and the strategic level, since it helps retailers differentiate themselves from other competitors. Studies dealing with some store-specific characteristics that affect retail performance have also appeared in the literature. Within the growing importance of performance measurements in retail, more advanced methodologies have also been introduced. In contrast to the traditional literature where simple ratios were the most adopted productivity methods, significant volume of work currently exists in the area of measuring production efficiency by estimating an “efficient frontier” that serves as a benchmark for evaluating performance. The most adopted methods for that purpose include the stochastic frontier (SF) and data envelopment analysis (DEA) methods [5], [6], [7], [8] and [9]. The advantage of both these methods is that they allow the use of multiple inputs and outputs in the measurement of performance, making them thus more suitable in the retail context. Although the DEA method is a nonparametric, deterministic approach that defines a relationship between multiple spending inputs and outputs by building an efficient frontier, it has been critiqued for not providing fit statistics such as r-square or p-value that can be used for statistical inferences [10]. The SF method, on the other hand, uses a parametric approach by explicitly taking into account the stochastic properties of the data [1] and [19]. The aim of this study is driven by all of the above, and the motivation is to extend the existing literature by offering more accurate insights into the performance determinants of retail stores. Specifically, the study focuses on analyzing on the supermarket industry, which is traditionally known to be very competitive. Most supermarkets operate on a high inventory turnover usually with low profit margins, which suggests that retail mark up for each individual product is very low. In most countries, supermarkets compete against national, regional, local and independent supermarkets, specialty food stores, club stores, drug stores, convenience stores, discount merchandisers, and other local retailers. They compete on the basis of price, store location, product mix or types of products and brands and services. The industry’s small mark up price format indicates that price is extremely significant. In other words, supermarkets rely on low mark up and high sales volumes as opposed to higher mark up and lower volume of sales. Is this context, efficiency analysis constitute a useful and interesting tool to improve the profitability of supermarket chains. Most existing studies in the literature have generally focused on the estimation of efficiency without providing an in-depth analysis to the factors that lead to efficiency variations between retail stores. The sole focus on efficiency makes the study also limited to one sample or one geographic area of analysis. However, as this study focuses on identifying the sources of efficiency, the results can be more applicable to other retail sectors, or even to the same retail sector in other countries. The methodology used in this study also provides an innovation to the existing literature. For the first time, we use the Bayesian methodology that has several advantages over the maximum likelihood (ML) traditionally used to estimate the SF approach. For instance a key advantage of the Bayesian approach is that it allows the inclusion of “prior” information about parameters in inferences. With Bayesian, the results are also usually presented in terms of probability density function (pdfs), making it thus possible to make probability statements about the model parameters. In testing our hypotheses we use a sample of Spanish retail supermarkets. There are several interesting characteristics of the Spanish retail market that allow us to test our desired hypotheses. In the next section we provide a brief overview of the Spanish retail market. This is followed by the literature review, methodology, data characteristics/hypotheses, discussions, and concluding remarks.

Growing competitiveness among retail companies and the globalization of markets have given rise to an economic environment in which it is becoming increasingly difficult for companies to survive. In today’s extremely competitive environment, consumers are more demanding than ever as they constantly seek immediate access to products at lower prices. In this context, the analysis of efficiency has become an important issue in the retail sector [62]. Efficiency favors intermediary management, playing an important role in the control and management of retail firms. Efficiency analysis also provides vital information for a number of tactical, strategic, and policy related decisions in the retail industry [63]. At a tactical level, for a multi-unit firm, a manager’s control and expansion strategies begin with an assessment of the relative store efficiency level. Strategically, retail efficiency can be used to differentiate firms and provides the foundation to develop strategies for growth and diversification. This paper extended the existing literature by offering more accurate insights into the performance determinants of retail stores. The model used in this study also presents a new contribution to the retail literature. The results obtained imply that stores with lower price strategy, longer existence in the market, and multiple geographical presences are more efficient than stores that do not possess these characteristics. Finally, the coefficient of the vertical integration variable is negatively signed, indicating that this strategy did not contribute to higher cost efficiency in the Spanish retail context. The results may be also used as external benchmarking. The process of benchmarking requires measuring the difference between the current performance level of an organization and the best possible practice. In this sense, efficiency analysis is a useful tool that can be used to identify the best possible practices that are adopted by the most efficient retailers. Equally important for managers is also the identification of factors that drive efficiency improvement. To our knowledge, this paper is the first step towards identifying the determinants of cost efficiency in the supermarket retail industry. Given the fact that supermarkets develop their activities in a very competitive environment and consumers are more demanding than ever, supermarket managers must be aware of the importance of analyzing their own efficiency, as well as how to improve it. Actually, as the study identifies the determinants of efficiency, the results could be also of particular importance in formulating performance improvement strategies. Currently, much of the existing research analyzes efficiency at the macro (aggregate) level. Although this could be important for policy makers, it is less useful for managers who are mainly interested in the store-level performance. As the level of analysis of our research is at the micro (firm) level, the findings should provide useful implications to managers. In fact, service managers require precise measures of performance in order to draw correct conclusions about the strategies they need to outperform their competitors [64] and [65]. Essentially, our research aims to extend the theoretical and empirical understanding of retailing efficiency, and also provide practical implications for managers. The generalization of our findings to the entire sector must however be done with due care, since only one of the players in the distribution channel has been analyzed, i.e. the supermarket chains. It is also worth noting that possible supply and demand restrictions derived from the scope of retail activity as a service activity have not been considered. Further, it would be possible to include other relevant variables in the production process, such as the degree of technological development of the companies themselves, as efficiency drivers. Although this paper considers several variables affecting efficiency, we should take into account that these variables are not the only drivers of efficiency. Future research can extend the results of this study by comparing the performance of retailers across various industries (department stores, fast-food restaurants, banks, etc.). It is also possible to provide further validation to the hypotheses tested in this study by replicating the model to other countries. Depending on the data availability, it is also possible to test the impact of other retails store characteristics on efficiency. For managerial purposes, it might be also useful to conduct some detailed case analysis on inefficient and efficient stores in order to identify other best practices that can help improve the performance of low performing stores.