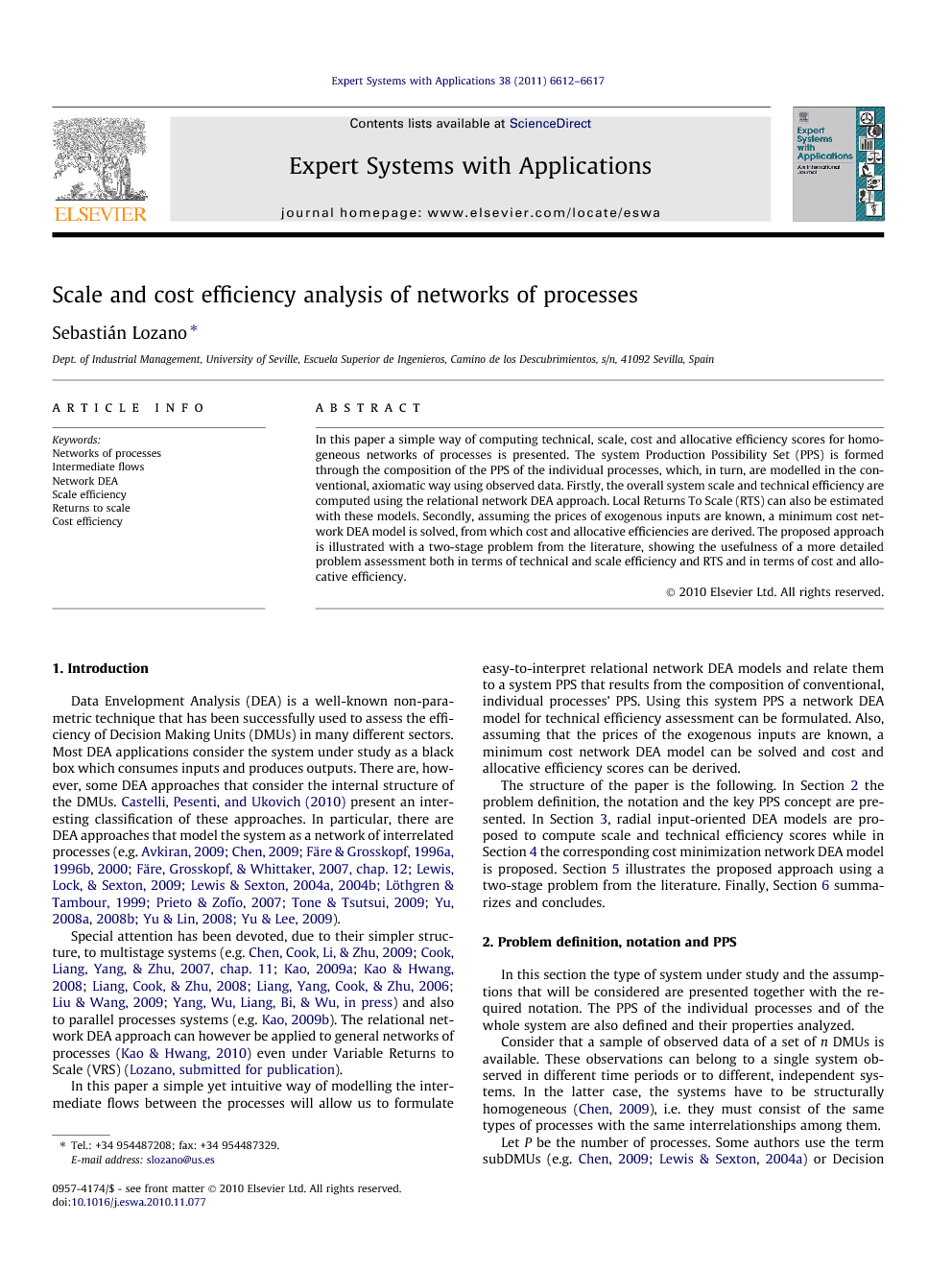 In this paper a simple way of computing technical, scale, cost and allocative efficiency scores for homogeneous networks of processes is presented. The system Production Possibility Set (PPS) is formed through the composition of the PPS of the individual processes, which, in turn, are modelled in the conventional, axiomatic way using observed data. Firstly, the overall system scale and technical efficiency are computed using the relational network DEA approach. Local Returns To Scale (RTS) can also be estimated with these models. Secondly, assuming the prices of exogenous inputs are known, a minimum cost network DEA model is solved, from which cost and allocative efficiencies are derived. The proposed approach is illustrated with a two-stage problem from the literature, showing the usefulness of a more detailed problem assessment both in terms of technical and scale efficiency and RTS and in terms of cost and allocative efficiency.

Data Envelopment Analysis (DEA) is a well-known non-parametric technique that has been successfully used to assess the efficiency of Decision Making Units (DMUs) in many different sectors. Most DEA applications consider the system under study as a black box which consumes inputs and produces outputs. There are, however, some DEA approaches that consider the internal structure of the DMUs. Castelli, Pesenti, and Ukovich (2010) present an interesting classification of these approaches. In particular, there are DEA approaches that model the system as a network of interrelated processes (e.g. Avkiran, 2009, Chen, 2009, Färe and Grosskopf, 1996a, Färe and Grosskopf, 1996b, Färe and Grosskopf, 2000, Färe et al., 2007, Lewis et al., 2009, Lewis and Sexton, 2004a, Lewis and Sexton, 2004b, Löthgren and Tambour, 1999, Prieto and Zofío, 2007, Tone and Tsutsui, 2009, Yu, 2008a, Yu, 2008b, Yu and Lin, 2008 and Yu and Lee, 2009). Special attention has been devoted, due to their simpler structure, to multistage systems (e.g. Chen et al., 2009, Cook et al., 2007, Kao, 2009a, Kao and Hwang, 2008, Liang et al., 2008, Liang et al., 2006, Liu and Wang, 2009 and Yang et al., in press) and also to parallel processes systems (e.g. Kao, 2009b). The relational network DEA approach can however be applied to general networks of processes (Kao & Hwang, 2010) even under Variable Returns to Scale (VRS) (Lozano, submitted for publication). In this paper a simple yet intuitive way of modelling the intermediate flows between the processes will allow us to formulate easy-to-interpret relational network DEA models and relate them to a system PPS that results from the composition of conventional, individual processes’ PPS. Using this system PPS a network DEA model for technical efficiency assessment can be formulated. Also, assuming that the prices of the exogenous inputs are known, a minimum cost network DEA model can be solved and cost and allocative efficiency scores can be derived. The structure of the paper is the following. In Section 2 the problem definition, the notation and the key PPS concept are presented. In Section 3, radial input-oriented DEA models are proposed to compute scale and technical efficiency scores while in Section 4 the corresponding cost minimization network DEA model is proposed. Section 5 illustrates the proposed approach using a two-stage problem from the literature. Finally, Section 6 summarizes and concludes.

In this paper a way of modelling the internal flows within a network of processes has been presented which allows for a simple and convenient way of defining the PPS of individual processes as well as the system PPS for any combination of RTS assumptions. Input-oriented relational network DEA models have been proposed to compute network technical and scale efficiencies and to estimate RTS. Also, assuming input prices are known, a cost minimization relational network DEA can be solved and cost and allocative efficiencies can be computed. The proposed approach has been illustrated with a two-stage problem from the literature, showing the usefulness of a more detailed problem assessment both in terms of technical and scale efficiency and RTS and in terms of cost and allocative efficiency. Although the approach proposed in this paper is simple and effective there are still some issues that warrant further research. One is extending the approach to the case in which there is a market for some (or all) of the intermediate products, allowing them to be partially or totally acquired or sold externally. Another research topic is to take into account in the model formulation that the intermediate flows can be of a reverse type (Lewis & Sexton, 2004b). Finally, the related issue of the possibility of some final products being undesirable outputs (polluting emissions, noise, etc.) should also be studied.