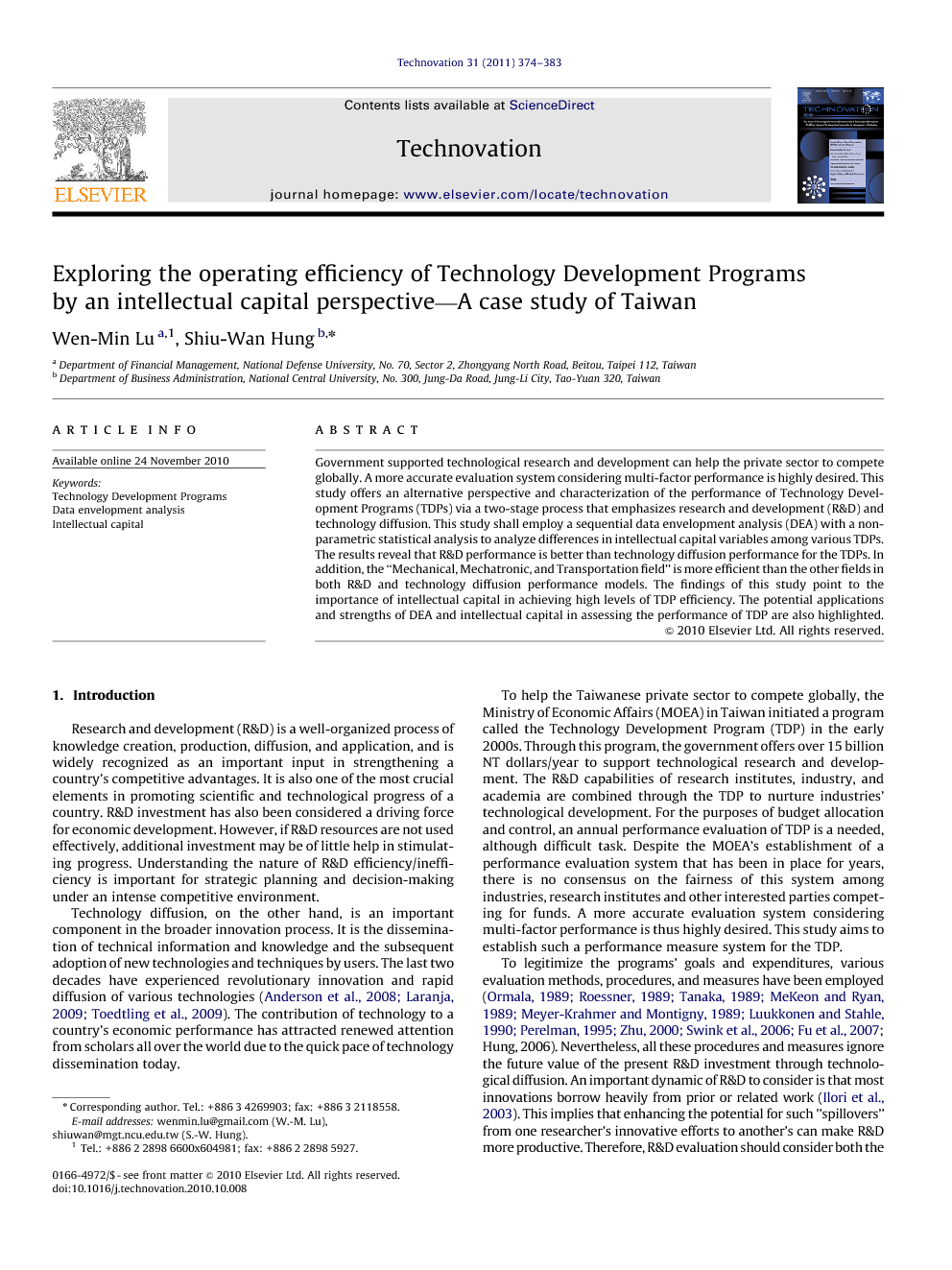 Government supported technological research and development can help the private sector to compete globally. A more accurate evaluation system considering multi-factor performance is highly desired. This study offers an alternative perspective and characterization of the performance of Technology Development Programs (TDPs) via a two-stage process that emphasizes research and development (R&D) and technology diffusion. This study shall employ a sequential data envelopment analysis (DEA) with a non-parametric statistical analysis to analyze differences in intellectual capital variables among various TDPs. The results reveal that R&D performance is better than technology diffusion performance for the TDPs. In addition, the “Mechanical, Mechatronic, and Transportation field” is more efficient than the other fields in both R&D and technology diffusion performance models. The findings of this study point to the importance of intellectual capital in achieving high levels of TDP efficiency. The potential applications and strengths of DEA and intellectual capital in assessing the performance of TDP are also highlighted.

Research and development (R&D) is a well-organized process of knowledge creation, production, diffusion, and application, and is widely recognized as an important input in strengthening a country's competitive advantages. It is also one of the most crucial elements in promoting scientific and technological progress of a country. R&D investment has also been considered a driving force for economic development. However, if R&D resources are not used effectively, additional investment may be of little help in stimulating progress. Understanding the nature of R&D efficiency/inefficiency is important for strategic planning and decision-making under an intense competitive environment. Technology diffusion, on the other hand, is an important component in the broader innovation process. It is the dissemination of technical information and knowledge and the subsequent adoption of new technologies and techniques by users. The last two decades have experienced revolutionary innovation and rapid diffusion of various technologies (Anderson et al., 2008, Laranja, 2009 and Toedtling et al., 2009). The contribution of technology to a country's economic performance has attracted renewed attention from scholars all over the world due to the quick pace of technology dissemination today. To help the Taiwanese private sector to compete globally, the Ministry of Economic Affairs (MOEA) in Taiwan initiated a program called the Technology Development Program (TDP) in the early 2000s. Through this program, the government offers over 15 billion NT dollars/year to support technological research and development. The R&D capabilities of research institutes, industry, and academia are combined through the TDP to nurture industries' technological development. For the purposes of budget allocation and control, an annual performance evaluation of TDP is a needed, although difficult task. Despite the MOEA's establishment of a performance evaluation system that has been in place for years, there is no consensus on the fairness of this system among industries, research institutes and other interested parties competing for funds. A more accurate evaluation system considering multi-factor performance is thus highly desired. This study aims to establish such a performance measure system for the TDP. To legitimize the programs' goals and expenditures, various evaluation methods, procedures, and measures have been employed (Ormala, 1989, Roessner, 1989, Tanaka, 1989, MeKeon and Ryan, 1989, Meyer-Krahmer and Montigny, 1989, Luukkonen and Stahle, 1990, Perelman, 1995, Zhu, 2000, Swink et al., 2006 and Fu et al., 2007; Hung, 2006). Nevertheless, all these procedures and measures ignore the future value of the present R&D investment through technological diffusion. An important dynamic of R&D to consider is that most innovations borrow heavily from prior or related work (Ilori et al., 2003). This implies that enhancing the potential for such "spillovers" from one researcher's innovative efforts to another's can make R&D more productive. Therefore, R&D evaluation should consider both the “current” R&D activity and the “future” value of R&D by technological diffusion. Among numerous research proposals focused on obtaining sustainable competitive performance in the current dynamic and information-dependent business environment, firms are alike in their reliance upon their intellectual capital (Amir and Lev, 1996, Edvinsson and Sullivan, 1996, Edvinsson and Malone, 1997, Roos and Roos, 1997, Bontis, 1998, Ulrich, 1998, Juma and Payne, 2004, Kong, 2007 and Smith, 2007). Unlike the traditional resources of financial capital, physical plants and machines, intellectual capital is considered key drivers of superior performance and value creation because it is idiosyncratic and hard to imitate by competitors (Marr et al., 2004, Nahapiet and Ghoshal, 1998, Pöyhönen and Smedlund, 2004 and Solleiro and Castanon, 2005). The current report shall attempt to provide an alternative perspective and characterization of the performance of TDPs via a two-stage production process that considers both R&D and technology diffusion, stressing the importance of intellectual capital. The definition of R&D productivity is the quantity of output divided by the quantity of input, while technological diffusion is a measure of technological externality. While better R&D efficiency is essential for an enterprise, a higher level of efficiency in technological diffusion is also important in determining the real value of an enterprise. A data envelopment analysis (DEA) method which inherently recognizes tradeoffs among various measures is employed to determine the operating performance of TDPs in Taiwan. DEA is a linear programming based technique that converts multiple output and input measures into a single comprehensive measure of performance. This is completed by the construction of an empirical-based production or resource conversion frontier and by the identification of peer groups. The philosophy behind DEA is predicated upon the fact that a frontier transformation function empirically captures the underlying process defining firms' production activities. The application of DEA is strongly supported in the multitude of empirical analysis methods in different fields of profit (Seiford, 1997, Linton et al., 2002, Gattoufi et al., 2004 and Emrouznejada et al., 2008). This paper is organized as follows: an overview of TDP performance and intellectual capital literature is given in Section 2; the design of the performance model and an introduction of the methodology are addressed in 3 and 4, respectively; and empirical results and interpretations are provided in Section 5. Implications are given in Section 6 and Section 7 concludes with the findings of this study. The results of this study can provide policy makers with insights into resource allocation and competitive advantage as well as help with strategic decision-making, especially regarding operational styles under an intense competitive environment.

This study has offered an alternative perspective and characterization of the performance of Technology Development Programs (TDPs) via a two-stage process that emphasizes “R&D” and “technology diffusion”. Additionally, this study implements the sequential DEA to identify four TDP groups. The non-parametric statistical analysis is used to analyze differences in intellectual capital (IC) variables across various groups. The results reveal that the overall R&D performance is better than the technology diffusion performance for the TDPs. In addition, the “Mechanical, Mechatronics, and Transportation” field performs better than the other two fields in R&D model, while the “Biotechnology, Pharmaceutical, and Material and Chemical” field performs best in the technology diffusion model. The findings of this study also highlight the importance of intellectual capital in achieving high levels of TDP efficiency, and should not be neglected in the assessment. The potential applications and strengths of DEA and intellectual capital in assessing the performance of TDP are also discussed.