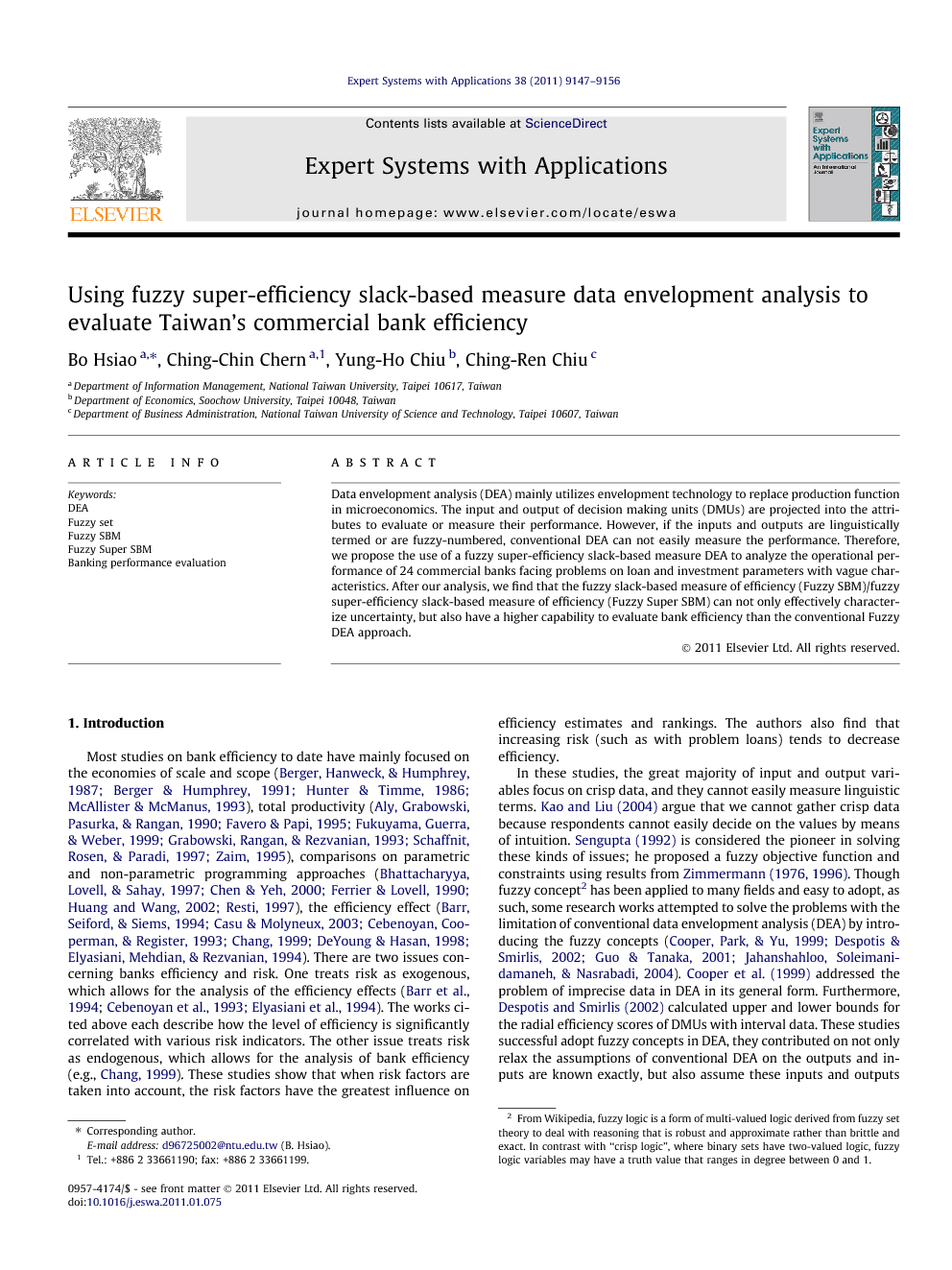 Data envelopment analysis (DEA) mainly utilizes envelopment technology to replace production function in microeconomics. The input and output of decision making units (DMUs) are projected into the attributes to evaluate or measure their performance. However, if the inputs and outputs are linguistically termed or are fuzzy-numbered, conventional DEA can not easily measure the performance. Therefore, we propose the use of a fuzzy super-efficiency slack-based measure DEA to analyze the operational performance of 24 commercial banks facing problems on loan and investment parameters with vague characteristics. After our analysis, we find that the fuzzy slack-based measure of efficiency (Fuzzy SBM)/fuzzy super-efficiency slack-based measure of efficiency (Fuzzy Super SBM) can not only effectively characterize uncertainty, but also have a higher capability to evaluate bank efficiency than the conventional Fuzzy DEA approach.

Most studies on bank efficiency to date have mainly focused on the economies of scale and scope (Berger et al., 1987, Berger and Humphrey, 1991, Hunter and Timme, 1986 and McAllister and McManus, 1993), total productivity (Aly et al., 1990, Favero and Papi, 1995, Fukuyama et al., 1999, Grabowski et al., 1993, Schaffnit et al., 1997 and Zaim, 1995), comparisons on parametric and non-parametric programming approaches (Bhattacharyya et al., 1997, Chen and Yeh, 2000, Ferrier and Lovell, 1990, Huang and Wang, 2002 and Resti, 1997), the efficiency effect (Barr et al., 1994, Casu and Molyneux, 2003, Cebenoyan et al., 1993, Chang, 1999, DeYoung and Hasan, 1998 and Elyasiani et al., 1994). There are two issues concerning banks efficiency and risk. One treats risk as exogenous, which allows for the analysis of the efficiency effects (Barr et al., 1994; Cebenoyan et al., 1993 and Elyasiani et al., 1994). The works cited above each describe how the level of efficiency is significantly correlated with various risk indicators. The other issue treats risk as endogenous, which allows for the analysis of bank efficiency (e.g., Chang, 1999). These studies show that when risk factors are taken into account, the risk factors have the greatest influence on efficiency estimates and rankings. The authors also find that increasing risk (such as with problem loans) tends to decrease efficiency. In these studies, the great majority of input and output variables focus on crisp data, and they cannot easily measure linguistic terms. Kao and Liu (2004) argue that we cannot gather crisp data because respondents cannot easily decide on the values by means of intuition. Sengupta (1992) is considered the pioneer in solving these kinds of issues; he proposed a fuzzy objective function and constraints using results from Zimmermann, 1976 and Zimmermann, 1996. Though fuzzy concept2 has been applied to many fields and easy to adopt, as such, some research works attempted to solve the problems with the limitation of conventional data envelopment analysis (DEA) by introducing the fuzzy concepts (Cooper et al., 1999, Despotis and Smirlis, 2002, Guo and Tanaka, 2001 and Jahanshahloo et al., 2004). Cooper et al. (1999) addressed the problem of imprecise data in DEA in its general form. Furthermore, Despotis and Smirlis (2002) calculated upper and lower bounds for the radial efficiency scores of DMUs with interval data. These studies successful adopt fuzzy concepts in DEA, they contributed on not only relax the assumptions of conventional DEA on the outputs and inputs are known exactly, but also assume these inputs and outputs could be represented as interval data. Furthermore, in contrast to the approach of Sengupta (1992), Kao and Liu (2000a), believed that only certain variables (versus all variables) with either linguistic issues or missing data (Kao & Liu, 2000b) could be applied using fuzzy concepts. Kao and Liu, 2000a and Kao and Liu, 2004 based their analysis on the α-cut and extension principle, which was earlier proposed by Zadeh (1965) as a way to measure performances of linguist variables. Later, Saati et al., 2002 and Lertworasirikul et al., 2003 proposed a triangle fuzzy measure to replace the α-cut of the Kao and Liu, 2000a and Kao and Liu, 2000b model, and then formed it into a linear programming model. Moreover, Entani, Maeda, and Tanaka (2002) proposed another approach to replace the triangle fuzzy measure and use the three-point measure, which referred to “optimistic,” “most possible,” and “pessimistic”. In addition, the recently DEA literatures related to fuzzy measure (e.g., Cooper et al., 1999), are focused on radial-based measurements, however these measurements are hardly to differenced on the same efficiency score of DMUs ranking, because radial-based measurements have weaker discrimination power than slack-based measurement. Therefore, we based on the findings of Tone (2001), resulting in the use of combined fuzzy concepts with a non-radial lack-based measure of efficiency (SBM) model. We use this model to evaluate the performance of 24 commercial banks in Taiwan. Section 2 briefly explains the fuzzy slack-based measure DEA (hereinafter referred as Fuzzy SBM), followed by the introduction of fuzzy super-efficiency slack-based measure (hereinafter referred as Fuzzy Super SBM) in Section 3. In Section 4, the 24 commercial banks with fuzzy data are examined with Fuzzy Super SBM/Fuzzy SBM and compared with conventional Fuzzy DEA. In Section 5, a discussion is provided to illustrate ranking issues from Fuzzy Super SBM, Fuzzy SBM, and conventional Fuzzy DEA. Section 6 offers our final thoughts and conclusion.

To date, evaluating banking performance is an important issue. Basel II or CAMEL (capital adequacy, asset quality, management quality, earnings, and liquidity) provides a standard to measure the uncertainty of risk. Both standards describe many variables and can provide banks with ways to evaluate their performance. In practice, there are many variables that cannot easily identify “absolute” values, especially with environment factors. However, we can sometimes use linguistic terms to describe values that the conventional DEA cannot fully fit. In this study, we proposed a fuzzy-based SBM model and fuzzy based super-efficiency SBM model to demonstrate their characteristics theoretically and empirically using the case of 24 commercial banks in Taiwan. The Fuzzy Super SBM not only solves inputs/outputs fuzzy number issues, it also provides a better ranking methodology for the banks. This provides an example for approaches that could easily use any fuzzy number data for evaluation. Finally, it is hoped that this study makes a small contribution to DEA. We look forward to seeing research extensions as specified above.