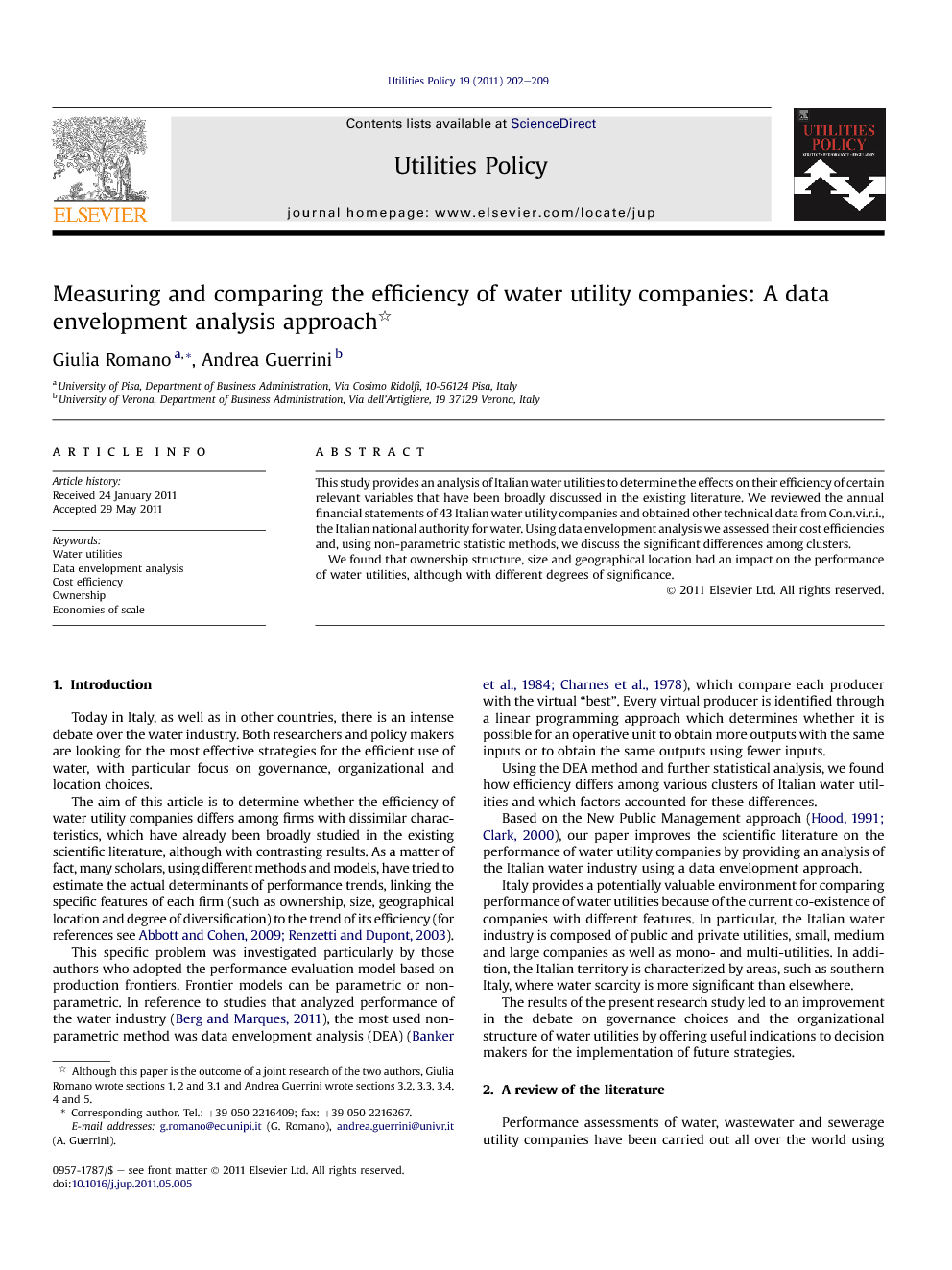 This study provides an analysis of Italian water utilities to determine the effects on their efficiency of certain relevant variables that have been broadly discussed in the existing literature. We reviewed the annual financial statements of 43 Italian water utility companies and obtained other technical data from Co.n.vi.r.i., the Italian national authority for water. Using data envelopment analysis we assessed their cost efficiencies and, using non-parametric statistic methods, we discuss the significant differences among clusters.

Today in Italy, as well as in other countries, there is an intense debate over the water industry. Both researchers and policy makers are looking for the most effective strategies for the efficient use of water, with particular focus on governance, organizational and location choices. The aim of this article is to determine whether the efficiency of water utility companies differs among firms with dissimilar characteristics, which have already been broadly studied in the existing scientific literature, although with contrasting results. As a matter of fact, many scholars, using different methods and models, have tried to estimate the actual determinants of performance trends, linking the specific features of each firm (such as ownership, size, geographical location and degree of diversification) to the trend of its efficiency (for references see Abbott and Cohen, 2009 and Renzetti and Dupont, 2003). This specific problem was investigated particularly by those authors who adopted the performance evaluation model based on production frontiers. Frontier models can be parametric or non-parametric. In reference to studies that analyzed performance of the water industry (Berg and Marques, 2011), the most used non-parametric method was data envelopment analysis (DEA) (Banker et al., 1984 and Charnes et al., 1978), which compare each producer with the virtual “best”. Every virtual producer is identified through a linear programming approach which determines whether it is possible for an operative unit to obtain more outputs with the same inputs or to obtain the same outputs using fewer inputs. Using the DEA method and further statistical analysis, we found how efficiency differs among various clusters of Italian water utilities and which factors accounted for these differences. Based on the New Public Management approach (Hood, 1991 and Clark, 2000), our paper improves the scientific literature on the performance of water utility companies by providing an analysis of the Italian water industry using a data envelopment approach. Italy provides a potentially valuable environment for comparing performance of water utilities because of the current co-existence of companies with different features. In particular, the Italian water industry is composed of public and private utilities, small, medium and large companies as well as mono- and multi-utilities. In addition, the Italian territory is characterized by areas, such as southern Italy, where water scarcity is more significant than elsewhere. The results of the present research study led to an improvement in the debate on governance choices and the organizational structure of water utilities by offering useful indications to decision makers for the implementation of future strategies.

The present paper analyzed the operative cost efficiency of Italian water mono-utility companies with the aim of contributing to the ongoing debate on the strategic and organizational choices of both policy makers and utilities managers. Our research improves the existing literature on performance measurement in water utilities by applying the DEA methods to the Italian water industry and, in addition, by using non-parametric statistic methods to discuss the significant differences among relevant clusters defined with reference to ownership structure, size and geographical location of the companies. Furthermore, we used data from 2007 which are the most recent data used in similar research projects. Our main findings point out that public owned firms have the highest efficiency scores with both DEA models (CRS and VRS), implying that public owned companies purchase and employ inputs in a much better way, when compared with mixed owned firms. This result confirms and extends the outcomes of a prior study on Italian water utilities (Guerrini et al., 2011). In addition, our research showed that companies located in central and southern Italy are more efficient than those operating in the north. This difference is significant only for CRS scores, when the median test is used. This was partially unexpected considering the structural features of water mains (companies operating in central and southern Italy had the lowest performance in terms of water losses) and this could be due to the higher rate of sanitation treatment per cubic meter shown by northern companies as well as to the size of firms, since companies in central-southern Italy are mostly large, and large companies typically had high scale efficiency. In conclusion, we found that small companies showed the highest scores of pure efficiency, followed by large and medium firms whilst the scale efficiency was higher for medium and large firms. This shows that economies of scale exist and involve medium firms (with more than 50,000 customers). This result is consistent with the main findings of the greater part of publications on water utilities which have shown the presence of economies of scale only in specific stages of growth. Further studies are necessary in order to improve assessment of the performance of water utilities and to overcome the limitations of the present work. First of all, it would be helpful to improve our set of data, adding data for more than one year and segmental reports for multi-utilities. Moreover, it would be interesting to consider the availability and quality of water for each company in the area where they operate. Finally, another interesting study would be an international comparison with other countries where the water industry has features similar to Italy (such as Portugal) in order to identify the specificity of each country and the relative strengths and weaknesses.