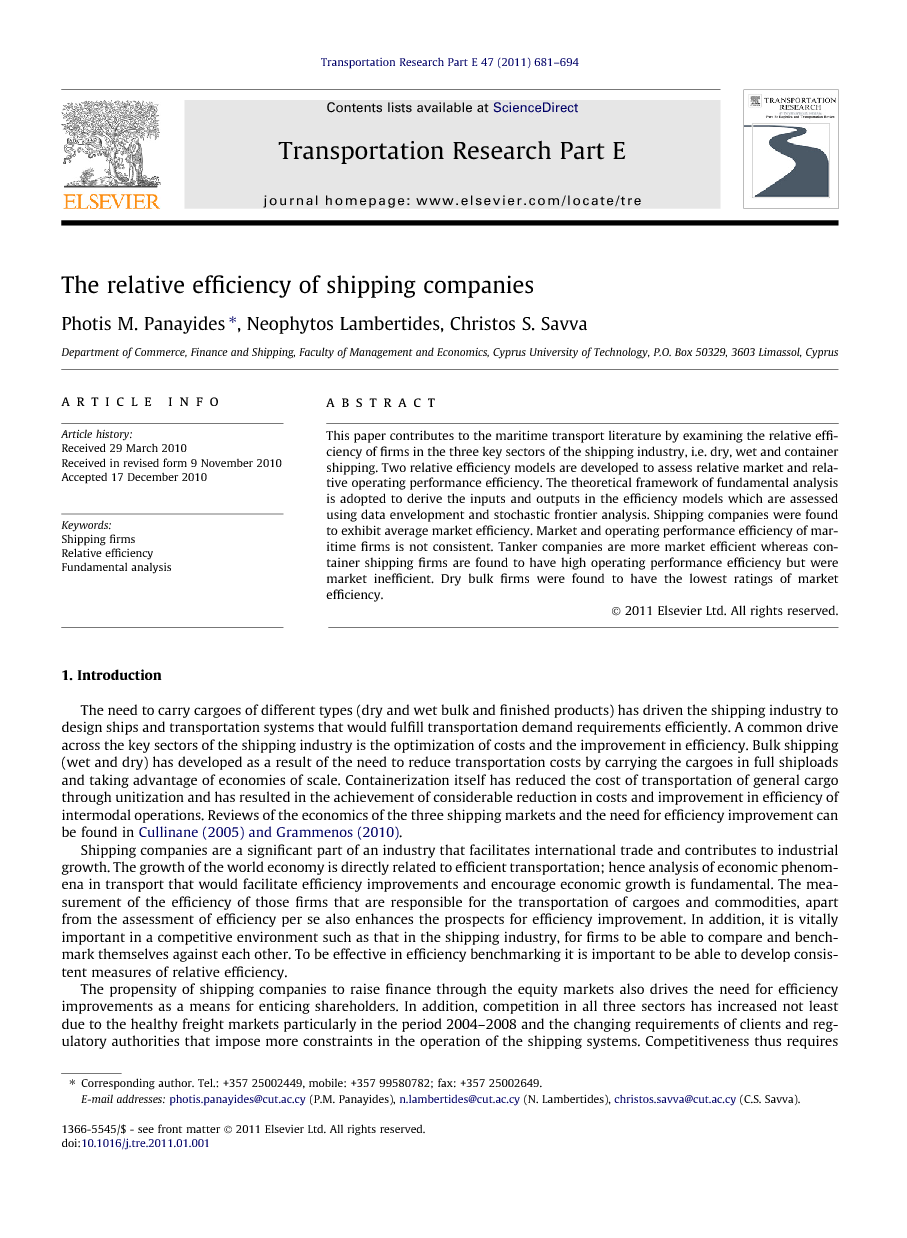 The need to carry cargoes of different types (dry and wet bulk and finished products) has driven the shipping industry to design ships and transportation systems that would fulfill transportation demand requirements efficiently. A common drive across the key sectors of the shipping industry is the optimization of costs and the improvement in efficiency. Bulk shipping (wet and dry) has developed as a result of the need to reduce transportation costs by carrying the cargoes in full shiploads and taking advantage of economies of scale. Containerization itself has reduced the cost of transportation of general cargo through unitization and has resulted in the achievement of considerable reduction in costs and improvement in efficiency of intermodal operations. Reviews of the economics of the three shipping markets and the need for efficiency improvement can be found in Cullinane, 2005 and Grammenos, 2010. Shipping companies are a significant part of an industry that facilitates international trade and contributes to industrial growth. The growth of the world economy is directly related to efficient transportation; hence analysis of economic phenomena in transport that would facilitate efficiency improvements and encourage economic growth is fundamental. The measurement of the efficiency of those firms that are responsible for the transportation of cargoes and commodities, apart from the assessment of efficiency per se also enhances the prospects for efficiency improvement. In addition, it is vitally important in a competitive environment such as that in the shipping industry, for firms to be able to compare and benchmark themselves against each other. To be effective in efficiency benchmarking it is important to be able to develop consistent measures of relative efficiency. The propensity of shipping companies to raise finance through the equity markets also drives the need for efficiency improvements as a means for enticing shareholders. In addition, competition in all three sectors has increased not least due to the healthy freight markets particularly in the period 2004–2008 and the changing requirements of clients and regulatory authorities that impose more constraints in the operation of the shipping systems. Competitiveness thus requires improvement in efficiency across the dry bulk, tanker and container markets of the industry. Even at times of low freight rates efficiency is critical to the survival of shipping firms. Although efficiency improvement is sought in all three sectors, such improvements are neither constant nor uniform. It is very important for shipowners and investors to be able to benchmark relative efficiency within and across the sectors of the industry. Despite the importance of relative efficiency estimation for shipping firms, the studies devoted to its measurement have been surprisingly limited. In fact, there is a distinct mismatch between the comparably large number of studies devoted to the measurement of relative efficiency in other sectors of shipping like ports and container terminals. In addition, there have been no studies to provide an assessment of relative efficiency of firms that would enable them to develop and compare indicators in order to gauge important aspects of their performance. The limited attention given to relative efficiency estimation for shipping firms means that variables and measures that may be used as inputs and outputs in the relative efficiency models have not been developed. By developing such measures this paper addresses another important gap in the extant literature. The importance of efficiency measurement and benchmarking can be underlined by the continuous propagation of methods that can be applied to measure it. Several approaches have been adopted sometimes with convergent and on other occasions with divergent results. The most traditional approaches can be classified into the stochastic (parametric) and deterministic (non-parametric) frameworks. Two specific approaches under the parametric and non-parametric frameworks that have been developed and widely applied are stochastic frontier analysis (SFA) and data envelopment analysis (DEA) respectively. Through the application of the two approaches a number of strengths and weaknesses for each approach have been highlighted (see Cullinane et al., 2006). The choice of methodology must be based on such factors as the characteristics of the production process, the degree of stochasticity and the number of outputs and possibility of aggregation (Herrero, 2005). Recognizing the limitations of the techniques this paper applies both DEA and SFA to the same data set to assess the robustness of the results. Recognizing the gaps in the maritime transport literature, the scope of this paper is to assess the relative efficiency of firms in the three major markets of the shipping industry, i.e. the dry bulk, wet bulk and container markets. The assessment will aim at providing a comparative analysis on two distinct aspects of relative efficiency, viz. relative market efficiency and relative operating performance efficiency. The paper makes a contribution to the measurement of relative efficiency in the maritime transportation literature (e.g. Barros, 2003, Barros, 2006, Cullinane, 2002, Cullinane et al., 2004, Cullinane et al., 2006, Park and De, 2004 and Tongzon, 2001) by undertaking this assessment for the first time. In addition, the paper adopts fundamental analysis in order to derive inputs and outputs that are used in the efficiency models. The use of fundamental analysis in the transportation sector is original and provides opportunities for the estimation of relative efficiency using an array of inputs and outputs not previously considered. The following section provides the theoretical background to the study. The literature on the measurement of relative efficiency in transportation is reviewed. Theoretical support is provided for the application of fundamental analysis in relative efficiency models. The section analyzes the market and operating performance efficiency models that will be empirically assessed. Section three describes the methodology that will be utilized for this study and includes the development of the empirical models using data envelopment analysis and stochastic frontier analysis. Section four describes the sample and provides the data assessment. Section five and section six present the empirical results and section seven provides a discussion of the results together with theoretical and practical implications. Sections eight and nine highlight the research limitations and further research recommendations and the conclusions respectively.

This study is the first to examine the issue of relative firm efficiency across three sectors of the shipping industry by adopting fundamental analysis variables and applying parametric and non-parametric approaches. The study makes a contribution to the maritime transport literature by identifying relative efficiency differences across the tanker, dry bulk and container sectors of the shipping industry. In particular shipping companies were found to exhibit only average market efficiency whereas operating performance and market efficiency for shipping companies is not consistent. Tanker companies are more market efficient whereas container shipping firms are operating performance efficient but market inefficient. Dry bulk firms were found to have the lowest ratings of market efficiency. In line with previous research no significant differences were identified from the adoption of DEA and SFA to measure relative efficiency providing evidence of the robustness of the results.