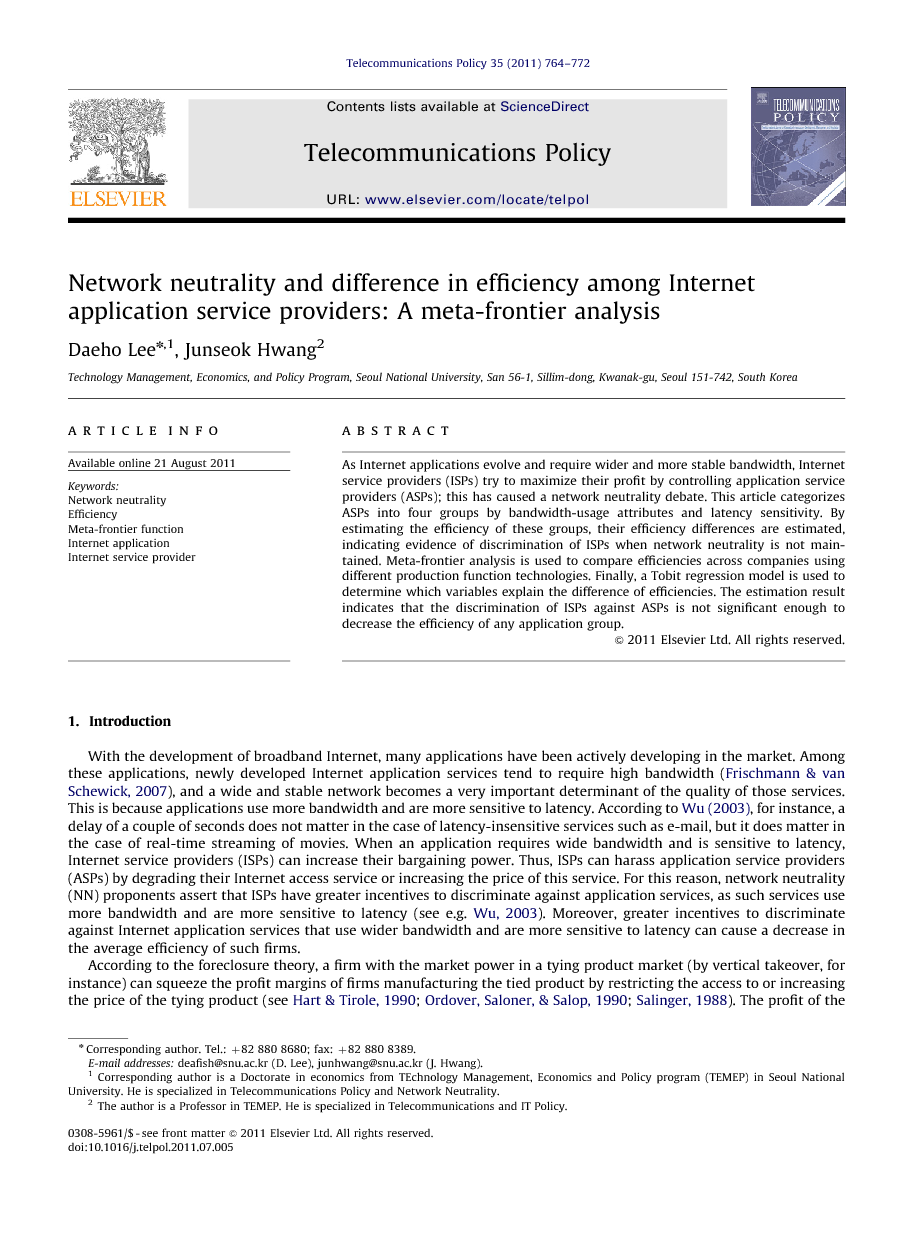 As Internet applications evolve and require wider and more stable bandwidth, Internet service providers (ISPs) try to maximize their profit by controlling application service providers (ASPs); this has caused a network neutrality debate. This article categorizes ASPs into four groups by bandwidth-usage attributes and latency sensitivity. By estimating the efficiency of these groups, their efficiency differences are estimated, indicating evidence of discrimination of ISPs when network neutrality is not maintained. Meta-frontier analysis is used to compare efficiencies across companies using different production function technologies. Finally, a Tobit regression model is used to determine which variables explain the difference of efficiencies. The estimation result indicates that the discrimination of ISPs against ASPs is not significant enough to decrease the efficiency of any application group.

This study categorized Internet firms into four distinct groups according to the bandwidth usage and latency sensitivity of the application service provider: UCC; online games; online music; and Web services such as Weblogs, online communities, and Web portals. The efficiency of the four groups was estimated using both the stochastic frontier production function and meta-frontier analysis. The former ignores the difference in the service providers’ technology, while the latter considers it for estimating the performance of the providers. The four service provider groups show different levels of TE* values, which can be decomposed into TE and TGR, each of which is analyzed. The WEB group has the highest TGR among the four sample technology groups. On the other hand, the UCC group has the highest TE and TE*. The result and evidence of heterogeneity in the performance of the groups suggest that the use of the meta-frontier approach is a powerful tool in accounting for technology gaps and subsequent bias in the performance of service providers compared to the traditional stochastic frontier function approach. The estimation results of the Tobit model show that the market share has a negative effect on TGR, while total sales have a positive effect. However, there is no significant relation between the application service characteristics (i.e., bandwidth usage and latency sensitivity) and the TGR of ASPs, thus supporting the NN opponents’ assertion that there is no significant ISP discrimination against ASPs. This study has some limitations. It does not consider the simultaneity between input choices and unobserved productivity shocks, and the sample selection issues due to the entry/exit of firms over the sample period. In addition, it may not detect the efficiency change due to the discrimination by the origin and destination of the packet. According to the NN proponents, packet discrimination can occur on the basis of the origin, destination, and content of the packet. Between the two types of discrimination, this study focuses on whether an ISP has the incentive to discriminate against ASPs on the basis of their content. Conducting further studies toward improving the methodology for considering these problems will be a great step forward. Further studies need to be carried out in this field of research and methodology to provide stable and robust results. Because almost all Internet firms are venture companies, the data used in this study is sourced from only a small number of firms. However, despite the small sample size, the advanced methodology and the unique data set shed light on the performance of this new service industry and the issues of NN. Additionally, it should be precisely analyzed whether the existence of NN, competitiveness of the firm and its size can make a difference as far as efficiency measurement and analysis is concerned.